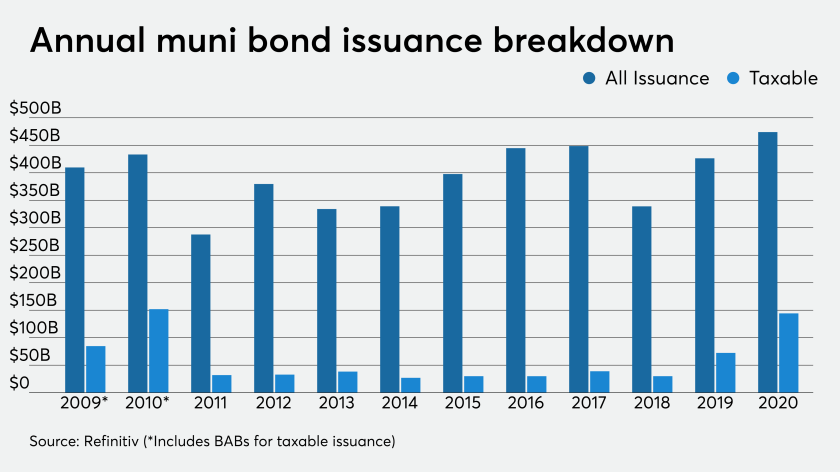 After one of the worst sell-offs in municipal market history as COVID-19 began its rampage in March, the market rebounded in spades and ends 2020 with an all-time issuance record.

Taxable munis have been mostly responsible for the issuance surge this year, a large portion of them being refundings. And while the total $144.3 billion of taxables is less than 2010’s $151.87 billion, it is also the largest on record when 2010 is stripped of direct-pay Build America Bonds.

“It doesn’t feel like there has been record supply this year,” said Dawn Mangerson, vice president, head of municipal portfolio management at Loomis Sayles & Co. “I think part of the reason is all the taxable issuance we saw, as it continues to grow and is above 30% of all issuance.”

There are many reasons why taxables have surged, she said, “but I would mainly attribute it to the fact that states and cities had fewer restrictions with proceeds when they go taxable and in return, they get more foreign investors and strong interest domestically as well.”

After seeing the lowest monthly volume total of the year in November with $18.84 billion — even lower than March’s $19.59 billion when the primary was essentially shut down — volume bounced back in December to the tune of $30.33 billion.

The year will end with 10 months that had greater than $30 billion of issuance, six of those months exceeding $40 billion and three surpassing the $50 billion mark.

Private placements, corporate CUSIPs, and direct bank lines of credit also took some of the tax-exempt paper out of the market, thereby freeing up exempts to be competitive with its traditional buyer base.

Corporate CUSIPs alone in 2020 blew up 223% over 2019 and landed at $40 billion for the year, according to IHS Markit data. If the market adds in that figure, the total annual issuance is well above $500 billion.

“You can’t look at supply without looking at demand, and one thing that I was surprised by, was how quickly investors came back into the muni market and stayed after the March and April panic,” Mangerson said. The market saw almost half a year’s worth of flows disappear in a two-week period in March when the total outflows were $46.128 billion, according to Refinitiv Lipper. Billions have flowed back into the funds since, more than $30 billion as of the end of November.

Issuance kicked into high gear in the third quarter when issuers sold $143.34 billion. The fourth quarter, despite the lull in November, accounted for $122.85 billion.

While taxable issuance in December was down 25% year-over-year to $8.69 billion from $11.58 billion, Jim Grabovac, investment strategist at Loomis Sayles, noted that for the year, the massive total taxable issuance was driven by a couple of factors.

“You had issuers going the route of advance refunding of tax-exempt debt and then you had issuers raising cash just to have liquidity and that was a strong trend throughout the year,” Grabovac said. ”The record year was reflected in corporates, as well, as they too saw record issuance. All in all, I think it would be hard for taxables to increase much more than the levels we saw this year, but I think it will remain robust.”

He noted that while issuance has been increasing, the size of the muni market has not considerably changed since the last recession, especially looking at corporates.

“It pales in comparison to the increase of the corporate market, remains less than 40% of the size of corporates, being held back by underfunding of long-term liability,” he said.

Only two sectors were in the green year-over-year for the month, while the rest declined by at least 1.5%.

Three types of issuers increased volume from a year ago, while issuance by the others declined by at least 9.9%.

California was the biggest state issuer in 2020 once again. All issuers in the Golden State accounted for $69.23 billion. Texas was second with $59.15 billion, New York was third with $53.64 billion, Florida followed in fourth with $20.64 billion and Ohio rounded out the top five with $17.77 billion.

What of credit in 2021?
Grabovac said state and locals are still reeling from revenue loss hit they have taken from COVID and pressure remains.

“It is disappointing that direct state and local aid has become political bargaining chip,” he said. “The impact on state and local credit has a lag effect. There will be continued pressure on revenues going forward.”

Grabovac said he is hopeful there is greater relief for state and locals in subsequent aid packages.

He expects a slower start to the year, per issuance, as issuers wait for the final makeup of the U.S. Senate and feel out the new administration, to get an idea of the lay of the land.

“When you look at factors going forward that could change, the consensus is that there will be less than 10% of more issuance for exempts next year, compared to this year,” Grabovac said. “Going forward, credit has a huge recovery to make and we expect to see a steepening curve and declining rates. We would anticipate the continuation of credit recovery and our expectation is spreads continue to tighten. Credit selection will be important in 2021.”

Mangerson noted that if the new administration is serious and follows through with its infrastructure aspirations, it could boost issuance for both exempts and taxables.

“The need for infrastructure improvement and investment is still there but [issuers] are stuck because they need to issue bonds to rebuild roads but most are in an austerity mood,” she said.

While tourism will pick up in areas across the country because of the vaccine, there are sectors that will continue to feel the pain. That’s partly due to employers finding that employees have embraced working from home and can continue to do so.

“I think mass transit ridership is forever altered,” she said.