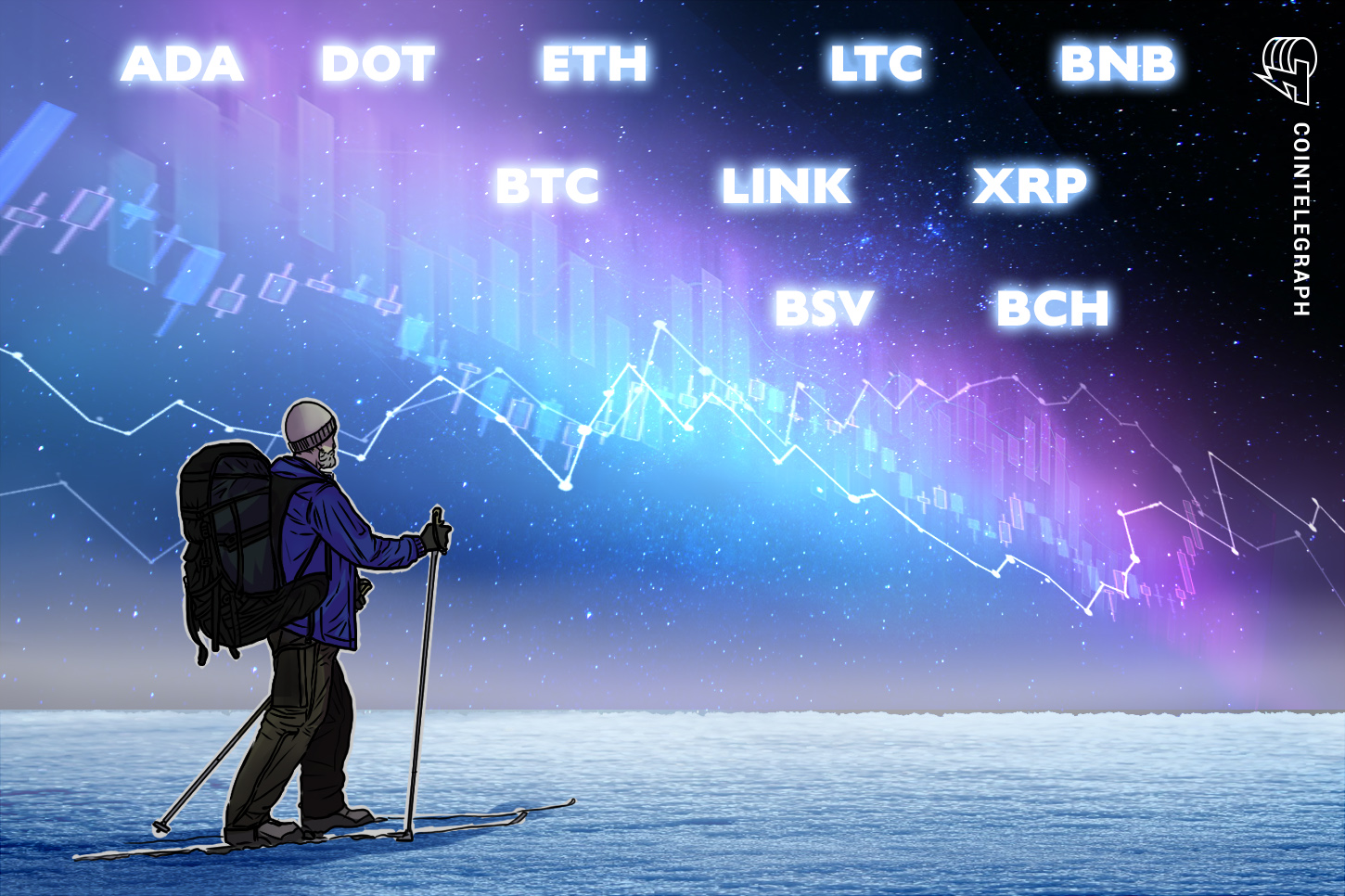 Institutional crypto investment giant Grayscale bought 72,950 Bitcoin in December, which was 159.49% more than the 28,112 Bitcoin mined during that period, according to data from Coin98 Analytics.

It is not only the institutional buying, a strong bull run also attracts speculators and momentum traders who try to piggyback on the up-move. This can be seen from the surge in Bitcoin’s transaction volume in December, according to on-chain analytics resource Digital Assets Data.

However, at some level, buyers will stop chasing prices higher and that could cause the rally to turn down. When it does, the speculators and momentum traders may rush to the exit and the buyers are likely to wait for lower levels to purchase again. This scenario could result in a sharp pullback. Hence, traders should employ suitable risk management strategies.

In a strong bull run, traders may watch the resistance levels for signs of a possible turnaround, but when the levels are scaled with ease, it shows that the trend remains strong. Let’s study the charts of the top-10 cryptocurrencies to identify the critical resistance levels on the upside.

Bitcoin is in a strong uptrend and traders are buying every intraday dip, without waiting for a deeper correction. The long-legged Doji candlestick pattern on Dec. 31 suggests that bears tried to start a correction but the bulls bought the dip aggressively.

However, the strong up-move of the past few days has pushed the relative strength index (RSI) deep into the overbought territory. This suggests the BTC/USD pair could enter a minor consolidation or correction near the $30,000 mark.

Contrary to this assumption, if the bulls drive the price above $30,000, the pair could continue its rally and rise to $37,000. But with every leg up, the risk to the downside increases.

If the price turns down from $30,000, the pair could drop to the 20-day exponential moving average ($24,842). A strong rebound off this level will suggest that the uptrend remains intact but a break below it could pull the pair down to the 50-day simple moving average ($20,614).

Ether (ETH) has been facing resistance near the $750 level for the past few days but the positive sign is that the bulls have not given up much ground. This suggests that traders are not booking profits aggressively as they expect the uptrend to resume.

If the bulls can push and sustain the price above $750, the ETH/USD pair may rally to $800 where the bears may again try to stall the uptrend. The rising moving averages and the RSI near the overbought zone suggest that bulls have the upper hand.

However, if the pair dips below $717, the correction could deepen to the 20-day EMA ($663). If the price rebounds off this support, it will suggest that the sentiment remains bullish and traders are buying on dips.

On the contrary, a break below the 20-day EMA will suggest that traders are not buying the dips and are booking profits aggressively. That could signal the start of a deeper correction.

XRP formed an inside day candlestick pattern on Dec. 30 and 31, which shows indecision among the bulls and the bears. The uncertainty resolved to the upside today and the bulls have started a relief rally.

In a strong downtrend, traders use rallies to establish short positions or close their long positions. The downsloping 20-day EMA and the RSI near the overbought territory suggest that bears are in command.

Therefore, the current attempt to move up may face strong resistance at the 20-day EMA ($0.357). If the price turns down from this level, the bears will try to resume the downtrend. If they can sink the price below $0.172536, the XRP/USD pair could fall to $0.10.

This negative view will be invalidated if the bears push the price above the 20-day EMA. Such a move will suggest that selling has exhausted and a few days of range-bound action could follow.

Litecoin (LTC) has held above $124.1278 for the past few days, which suggests that the bulls are attempting to flip this level to support. The upsloping moving averages and the RSI in the positive zone suggest that the bulls are in control.

If the bulls can propel the price above the $140 resistance, the LTC/USD pair may resume its uptrend. The bears may again try to stall the rally at the psychological resistance at $150, but if this level is scaled, the up-move could reach $160.

If the price rebounds off this level, the bulls will again try to resume the uptrend. However, a break below the 20-day EMA will open up the possibilities for a deeper correction to the 50-day SMA ($91.96).

Polkadot (DOT) resumed its up-move after a one-day minor correction on Dec. 30. The 28.145% rally on Dec. 31 shows that the altcoin is backed by strong momentum.

However, the uptrend has pushed the RSI into the overbought territory and the bears are currently trying to stall the up-move in the $9.51 to $10 overhead resistance zone.

If the DOT/USD pair again witnesses a minor correction and turns up from the 38.2% Fibonacci retracement level at $7.7614, it will suggest that traders are not closing their positions in a hurry and are buying on every minor dip. This may push the pair to $11.

Bitcoin Cash (BCH) turned down from the $370 overhead resistance on Dec. 28 and slipped below the $353 support on Dec. 31. The bulls are currently attempting to sustain the price above the 20-day EMA ($323).

If the price turns up from the current levels, the bulls will make one more attempt to drive the price above $370. The upsloping moving averages and the RSI in the positive zone suggest that bulls have the upper hand.

A breakout and close above $370 could resume the up-move and the BCH/USD pair could reach $430 and then $500. This positive view will be invalidated and the pair may remain stuck in the range if the bears sink the price below the 20-day EMA.

Cardano (ADA) has been holding above the $0.175 support for the past two days, which suggests that the bulls have been purchasing the dips to this level. However, the failure to resume the up-move indicates that demand dries up at higher levels.

The range has contracted for the past two days and soon this will be followed by a range expansion. If the range resolves to the upside and the bulls push the price above $0.1966315, the ADA/USD pair could rally to $0.22 and then to $0.235.

The rising moving averages and the RSI in the positive zone suggest that the path of least resistance is to the upside. This positive view will invalidate if the bears sink and sustain the price below the 20-day EMA ($0.165). If that happens, it will suggest that the recent breakout was a bull trap.

Binance Coin (BNB) did not even correct to the 38.2% Fibonacci retracement level of the latest leg of the rally and it turned up from $36.5157 on Dec. 31. This suggests that traders aggressively bought the dip.

If the bulls can push the price above the $40 resistance, the BNB/USD pair could resume its rally and reach $45 and then $50. The rising moving averages and the RSI near the overbought territory indicate bulls are in control.

Contrary to this assumption, if the price again turns down from $40, the pair may remain range-bound between $35.69 and $40 for a few days. The trend could change if the bears sink the price below the 20-day EMA ($34).

Chainlink (LINK) is trading inside a descending channel. The failure of the bears to sink and sustain the price below the $11.29 support has attracted buyers today who are attempting to push the price above the 20-day EMA ($12.13).

If they succeed, the LINK/USD pair could rise to the resistance line of the channel. A break above the channel and the $13.28 resistance could start a new uptrend that could reach $16.39.

However, if the price turns down from the current levels or the resistance line of the channel, then the bears will again try to break the $11.29 support. If they manage to do that, the pair could drop to $10 and then to the support line of the channel near $9.60.

The bulls are struggling to push Bitcoin SV (BSV) above the 20-day EMA ($167), and the bears are not able to sustain the price below $160. This suggests a balance between supply and demand but this tight range action may not continue for long.

If the bulls push the price above the moving averages, the BSV/USD pair could rally to $181 where the bears are likely to mount a stiff resistance. If the price turns down from this level, the range-bound action is likely to extend for a few more days.

On the other hand, if the pair dips below $160, the pair could drop to $146 where the buyers may step in. A strong bounce could keep the price inside the angle for some more time. The indicators are not showing a clear advantage either to the bulls or the bears.