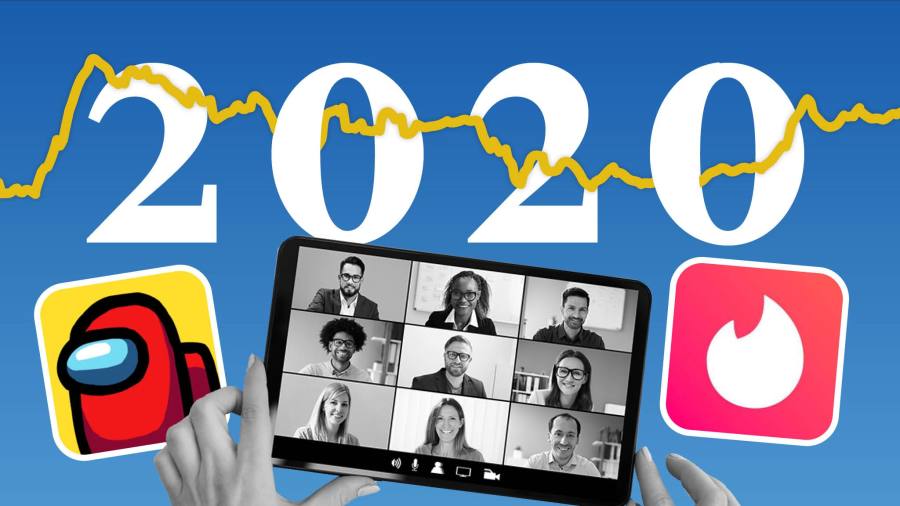 When the first coronavirus lockdowns were imposed outside China, billions of people around the world were forced to look online for communication, collaboration, entertainment and sustenance.

But the story of tech’s role in the pandemic did not end there.

Early lockdown hits such as Houseparty soon lost momentum, while some of the year’s biggest breakouts, such as the game Among Us, did not emerge until later in the year.

Around the world and across many categories, a unifying theme was that leading sites and services benefited most — the big just kept getting bigger. The exception is Zoom, the underdog video app that became a verb; even Microsoft, whose Teams app crushed lesser rivals, could not slow Zoom down.

The following charts draw mainly on findings from SimilarWeb, which tracks web browsing data from samples of millions of people, and Apptopia and App Annie, which do the same for mobile apps. We chose to represent either website visits or mobile app usage data, depending on the category, based on what we believe is the most reliable indicator of how the world used the internet in 2020.

The surge in broadband traffic in March and April was so extreme that some video services, such as YouTube, were forced to downgrade streaming resolution to preserve bandwidth — an unprecedented move.

Even after lockdowns began to ease in some parts of the world, online activity — where internet access was available — remained elevated, and the second uptick in November was almost as large as that of the spring.

However, not everyone was able to go online when lockdowns curtailed their real-world activities. Even in some of the largest internet markets, such as India and China, there remain hundreds of millions of people without regular connectivity. Africa’s internet penetration still lags far behind the rest of the world.

Even though there was little scope for real-world socialising and dating, the pandemic only accelerated the growth of the leading social and communication apps. Facebook’s biggest competition is itself, with usage of its image-sharing platform Instagram closing in on stablemate WhatsApp, according to Apptopia, which tracks mobile user behaviour.

Twitter’s annual review of its users’ posts reflected the people who dominated 2020’s political and cultural conversation. Outgoing US president Donald Trump and his successor Joe Biden topped the chart — alongside the wave of anti-racism protests around the world that followed the police killing of George Floyd — and, of course, the K-pop band BTS. Twitter’s most-used emoji was “laughing-crying”, for the third year running.

Netflix’s outsized performance also proves the value of being the default choice in any given internet category. Disney Plus saw a particularly strong finish to the year as families gathered for Thanksgiving, Christmas and other holidays. Trending hits such as Tiger King and The Mandalorian, and perhaps the need for a shared distraction from the horrors of the daily news, pushed more people around the world towards the same shows.

Back at the “office”, remote working tools and video calls were inescapable. (This chart only shows data from the web, so it excludes in-app activity on either desktop or mobile devices.) The internet’s ability to concentrate attention once again took hold, with Zoom benefiting disproportionately even though Microsoft’s Teams and Google’s Meet were available for free in many organisations. Controversies earlier in the year about Zoom’s security and privacy controls seemed to be trumped by convenience.

Amazon’s dominance of online retail and Prime shipping perks made it the go-to option when the high street was forced to shut down. But it was Amazon’s own invented shopping festival, Prime Day, in October that saw the biggest spike of the year so far, with Black Friday seeing further acceleration again. Overall, analyst group eMarketer estimated that US ecommerce grew by 32 per cent in 2020, to 14 per cent of total retail sales.

Food delivery apps were among the hottest tech companies of the year. That was demonstrated by DoorDash’s blockbuster initial public offering, which shot up by more than 80 per cent on its first day of trading, briefly valuing the company at $60bn and raising expectations for Deliveroo’s anticipated stock market debut in 2021. (The group selected in this chart is only a sample of the market, which has significant regional variation in app branding and availability; UberEats, one of the largest, was excluded because food ordering was merged into Uber’s main ride-hailing app, complicating a like-for-like comparison.)

Mental health rose up the corporate and political agenda in 2020, as the hidden costs of weeks and months in lockdown took their toll. That drove more smartphone users to swap doomscrolling Twitter for mindfulness and meditation apps such as Calm, which raised new funding at a $2bn valuation in December. But as gyms were forced to close, an even more striking change in mobile habits was seen among workout apps such as Strava and Nike Run Club. While usage may have fallen slightly from the summer’s peaks in Europe and North America, these exercise-tracking apps have managed to hold on to many of their new users throughout the year. That points to a more enduring change than the usual shortlived New Year’s boost.