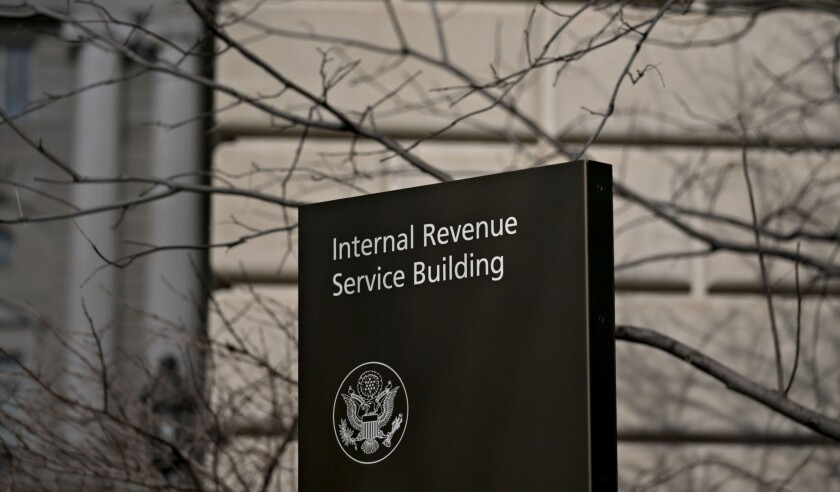 The COVID-19 pandemic is expected to dominate any regulatory and enforcement actions taken by the Internal Revenue Service in 2021 involving the public finance sector.

The pandemic is superseding other issues, such as the phase-out of Libor, efforts to reduce the cost of IRS private letter rulings and eliminating the adversarial elements in the IRS voluntary closing agreement program (VCAP) for tax-exempt and other tax advantage bonds.

In the early months of the pandemic, the IRS began granting regulatory relief and that has continued.

Most recently, a Dec. 11 memorandum issued by Sunita Lough, IRS deputy commissioner for services and enforcement, gives a six-month waiver through June 2021 for handwritten signatures on several forms, including the series Form 8038 pertaining to tax-exempt bonds.

The waiver allows electronic or facsimile signatures to suffice.

National Association of Bond Lawyers board member Matthias Edrich, a partner at Kutak Rock in Denver, said the Treasury and IRS have only granted a few of his organization’s requests for regulatory relief.

NABL sent its first regulatory relief letter to the IRS and Treasury on March 22. There have been subsequent letters sent on March 25 in April, July, October, and early December providing further details or requesting additional extensions.

“I think the IRS has been busy with other things,” said Edrich. “I don’t know whether the transition to the Biden administration will speed things up or it has been something for career government officials. Some of the easier requests have gone through.”

One of the earliest regulatory relief actions announced by the IRS on May 4 allows telephonic public hearings to replace the in-person public hearing requirement for issuance of private activity bonds under the 2019 update to the 1982 Tax Equity and Fiscal Responsibility Act (TEFRA).

The initial relief was followed up with an extension in Revenue Procedure 2020-49 that now runs through Sept. 30, 2021.

Still another NABL request that was granted over the summer came in Notice 2020-53 by the Treasury and IRS to extend the one-year time limit for the set aside of low-income housing units for housing projects, according to Edrich. The other part of Notice 2020-53 extended the two-year time limit on how long a rehabilitation project can take and still be eligible for a tax-exemption.

Edrich said that it’s unfortunate that both the extensions in Notice 2020-53 expire at the end of 2020, but he’s hopeful they will be extended soon because the pandemic is still raging.

The Treasury Department and IRS have not yet acted on one of NABL’s top priorities, which is to loosen the rules for state and local government borrowing for working capital.

The July NABL letter requested “long-term working capital borrowings on a tax-exempt basis with a weighted average maturity of up to ten years, with no requirement to retest for ‘available amounts’ after the bonds are issued, and without being subject to the special arbitrage and rebate rules otherwise applicable to long-term working capital borrowings.”

Edrich said if Treasury and the IRS granted that request, communities would be able to issue bonds for the purchase of Personal Protective Equipment and hospital supplies needed for fighting the pandemic.

“We thought that would be a pretty decent ask and a fairly relevant one, but that hasn’t gotten anywhere,” Edrich said. “We haven’t heard why some of these requests haven’t been taken up, so we’re still holding out hope.”

Another pending NABL request is for relaxation of the rules involving what constitutes a reissuance if there are changes to bond covenants that are COVID related. Lenders, particularly in the case of direct placements, may agree to forbearance on some of the debt service payments to help with an issuer’s cash flow.

Public finance advocates are encouraged that the Biden team appears to have an appreciation for the value of tax-exempt bonds in helping state and local governments.

On the enforcement front, the IRS should be able to boost its workforce in the coming months with a $409 million budget increase to $11.94 billion.

The IRS recently announced that its fiscal 2021 priorities for tax compliance and enforcement involving municipal bonds will be released in quarterly updates on the webpage of Tax Exempt and Government Entities Division-Compliance Programs and Priorities.

The initial focus for fiscal 2021 involves potential arbitrage violations of Internal Revenue Code Section 148 by the investment of bond proceeds in higher-yielding investments beyond the allowable temporary period under Treasury Regulation (Treas. Reg.)1.148-2(e).

Carol Lew, a shareholder at Stradling Yocca Carlson & Rauth in California, said the latest IRS program letter indicates the service is trying to be flexible during extremely trying times because of the pandemic.

“It’s a practical approach to dealing with these rapidly changing circumstances,” Lew said.