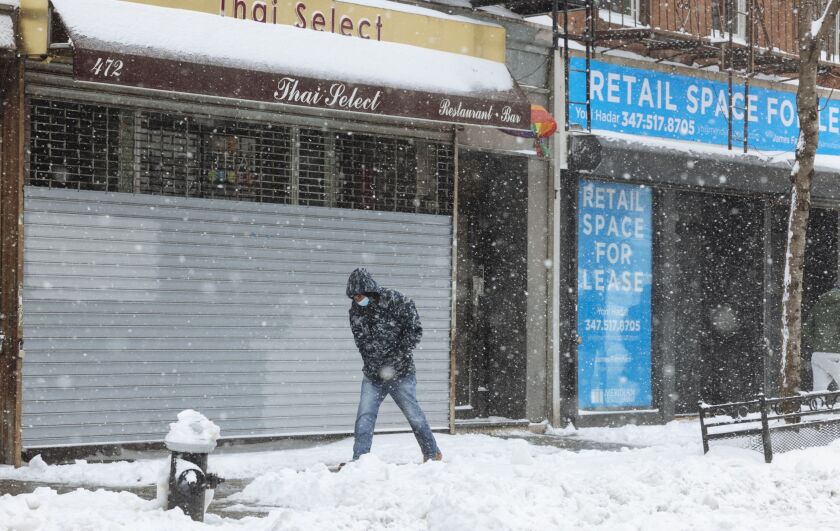 Parallel to discussions over COVID-19 federal rescue aid to New York City has been what the city can do for itself, both short- and long-term.

Mayor Bill de Blasio’s administration has spent its $1.4 billion allotment under the federal CARES Act passed in March. And while neither the state nor the city receive direct aid under the $900 billion package that Congress just enacted, more could come when Joe Biden becomes president.

Another round is expected to be considered next year, the size of which could hinge on the results of two runoff elections in Georgia on Tuesday that will determine party control of the U.S. Senate.

Meanwhile, budget watchdogs and others are suggesting the city explore how it can manage itself more efficiently.

“I think it’s fair to say that this is the worst fiscal crisis in generations, but it’s important to get under the hood of that and understand a little more,” said Citizens Budget Commission president Andrew Rein.

Lack of further direct aid could prompt de Blasio to revive his call for bonding to cover operations. Rein and CBC say such a move should only be a last resort and require what city officials dread — reactivation of the New York State Fiscal Control Board.

The control board, created during the 1970s fiscal crisis, still convenes annually, though in sunset mode, to rubberstamp the city’s annual spending plan.

De Blasio, a lame-duck mayor due to term limits, must release the fiscal 2022 preliminary budget in about a month. The state requires the city to balance its budget according to generally accepted accounting principles.

“The city has responded so far by kind of muddling through in a way it usually does in recessions,” Eric Kober, a senior fellow at free-market leaning Manhattan Institute, said on an MI webcast. He retired in 2017 as director of housing, economic and infrastructure planning at the Department of City Planning.

“The city has instituted a hiring freeze; has refinanced debt, which saves it some money; and it has deferred some personnel expenditures from the current fiscal year to next year,” Kober said. “And the sort of aggregate of these steps probably gets it through fiscal 2021. There’s a lot of uncertainty about fiscal 2022.”

The city has sustained multiple hits from the capital markets since the pandemic escalated in March.

On Dec. 8, Fitch Ratings downgraded its general obligation bonds and its issuer default rating to AA-minus from AA, while S&P Global Ratings that day revised its outlook on city GOs to negative while affirming its AA long-term rating on the city’s debt.

According to data on the Municipal Securities Rulemaking Board’s EMMA website, a block of Series 2018 Series C and Series D general obligation bonds maturing in 2024 that originally priced at 118.428 cents on the dollar and a 2.01% yield, sold to a customer Wednesday at a price of 116 cents and a 0.52% yield.

De Blasio’s successor must deal will spillover risks to the city’s bottom line, including warnings from state Comptroller Thomas DiNapoli that pension funds may not earn their expected rates of return, forcing city to make additional pension contributions.

Meanwhile, departures of wealthy residents have opened tax-revenue holes, with the growth of remote technology and stay-at-home measures complicating the return-to-city dynamics.

In addition, limits the past three years on caps to the state and local tax deductions have make New York less competitive taxwise, said Don Boyd, a principal at Boyd Research, and a senior research fellow at the University at Albany’s Rockefeller College.

On a positive note, according to Boyd, the revenue picture is not as bad as projected in April, the labor market is relatively stronger than expected and the stock market has recovered from March declines.

“We’ve seen before, in the great recession and in the 2001-2003 mild recession, that significant stock-market declines have huge impacts on revenues, especially for a city like New York,” he said.

Rein said the city could realize efficiencies without the need for layoffs. Talks with labor, however prickly, are necessary, he added. For example, the city could have longer sanitation routes to fill up trucks and use single-driver routes.

De Blasio’s predecessor, Michael Bloomberg, tried shutting 15 fire houses in 2010 but backed down amid political pressure. Since the merger of the fire department and city ambulance services in 1996, the ratio of fire-related responses have declined sharply.

“There is still that problem, the city simply maintains too many fire companies for its needs,” Kober said. “It’s a political third rail, has been, but nonetheless these are the kinds of right-sizings of city government that enable the city to cope.”

“Why does New York City need six largely ceremonial elected officials who have no counterparts in other large cities?” Kober said. “Essentially, taxpayers provide a platform for an aspiring politician who gets to criticize the decisions of the mayor and City Council but ultimately bears no responsibility for the tough choices that they necessarily have to make.”

These offices have been political springboards. De Blasio and Letitia James rose from public advocate to mayor and state attorney general, respectively; both sat on the City Council previously. Scott Stringer went from Manhattan borough president to city comptroller and is a leading candidate for mayor as is Brooklyn’s borough president, Eric Adams.

Rein called on the city to firm up its rainy-day fund mechanism. Voters overwhelmingly approved the establishment of such a fund in November 2019, but the city has yet to implement one — staying with its longstanding amalgams of reserves — and state legislation that enabled the fund was short on formal procedures.

“We need the right constraints at the city level,” he said. “Mandatory deposits into our rainy-day fund during the good times and withdrawal rules during the bad times.”

Such a fund with restrictions in place would have added $6 billion to city reserves, according to Rein.

“We’ve got to think for the future about the next pandemic and the next Hurricane Sandy. If we come out of this without that — we came out of Sandy, we haven’t changed as much as we should have — we’re going to be sitting there scratching our heads at some period of time and say, ‘you know, we shoulda, woulda, coulda.’ ”