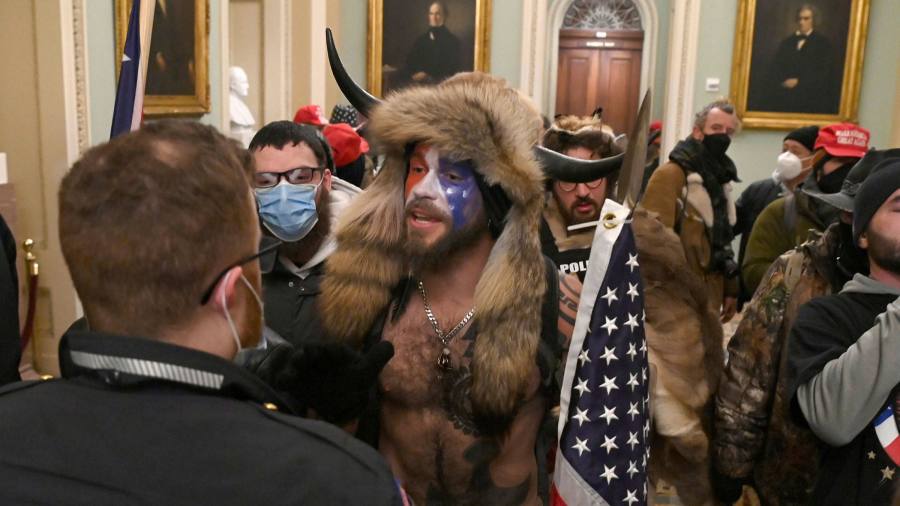 US lawmakers were forced to suspend the certification of Joe Biden’s election victory and leave parts of the Capitol in Washington after Trump supporters pushed past police and stormed the building on Wednesday.

The Capitol was put on lockdown after protesters — some carrying pro-Trump paraphernalia as well as flags of the US or the Confederacy — swept through the hallways of Congress. Capitol police later began evacuating lawmakers, staffers and reporters, who were told to grab gas masks located under their seats.

Multiple US media outlets reported that one person had been shot on the Capitol grounds. Law enforcement officials did not immediately respond to request for comment.

Kayleigh McEnany, the White House press secretary, tweeted that the National Guard was “on the way” at the direction of President Donald Trump along with “other federal protective services”. The governor of Virginia said he was sending members of his state’s National Guard to assist, along with 200 Virginia state troopers.

The office of the Secretary of the Army said in a statement: “We are in close contact with local and federal law enforcement agencies to review potential additional support requirements for the DC National Guard.”

Mr Trump called for peace but stopped short of asking his supporters to leave the capital. “I am asking for everyone at the U.S. Capitol to remain peaceful,” he wrote on Twitter. “No violence! Remember, WE are the Party of Law & Order — respect the Law and our great men and women in Blue. Thank you!”

Mike Pence, vice-president, was pulled from the Senate floor, where he was presiding over a debate about the certification. Only hours before, he had defied Donald Trump and said he would not stop Mr Biden from being certified as the winner of the US presidential election.

“The violence and destruction taking place at the US Capitol Must Stop and it Must Stop Now. Anyone involved must respect Law Enforcement officers and immediately leave the building,” Mr Pence tweeted.

“Peaceful protest is the right of every American but this attack on our Capitol will not be tolerated and those involved will be prosecuted to the fullest extent of the law,” he added.

The protesters were among thousands of Trump supporters who had gathered in Washington on Wednesday in a show of support for the president, who had encouraged the demonstrations. Ten people were arrested during pro-Trump protests a day earlier.

As the protesters breached the Capitol, staff inside several office buildings that make up the sprawling Capitol Hill campus were ordered to evacuate to an underground tunnel connected to a separate building due to “police activity”.

Staffers were ordered to take emergency evacuation packs, including hoods to filter out noxious fumes and gas, and “go bags” containing food and water with them.

Democrats blamed Mr Trump and his Republican allies for the violent mobs.

Dean Phillips, a Democratic congressman from Minnesota, shouted: “This is because of you!” at Republican colleagues as the House chamber was cleared on Wednesday.

“This has been brewing for four years, and the collective dereliction of duty manifest itself in that moment for me, and I hope it did for some of them, too,” Mr Phillips later told reporters “This is a dark day . . . my hope is that this is rock bottom.”

Tom Malinowski, a Democratic congressman from New Jersey, told reporters: “When leaders use the kinds of the words that the president has used, and many members of this chamber have used . . . this is the logical endpoint.

“Words matter,” he added. “One of our failings in this moment is that we assume that people don’t mean what they say . . . We have a president who has encouraged an incited an armed attack on the Capitol of the United States.”

Muriel Browser, the Democratic mayor of Washington, responded by ordering a citywide curfew for the US capital starting at 6pm, when no one other than those “designated by the mayor” will be allowed on the street.