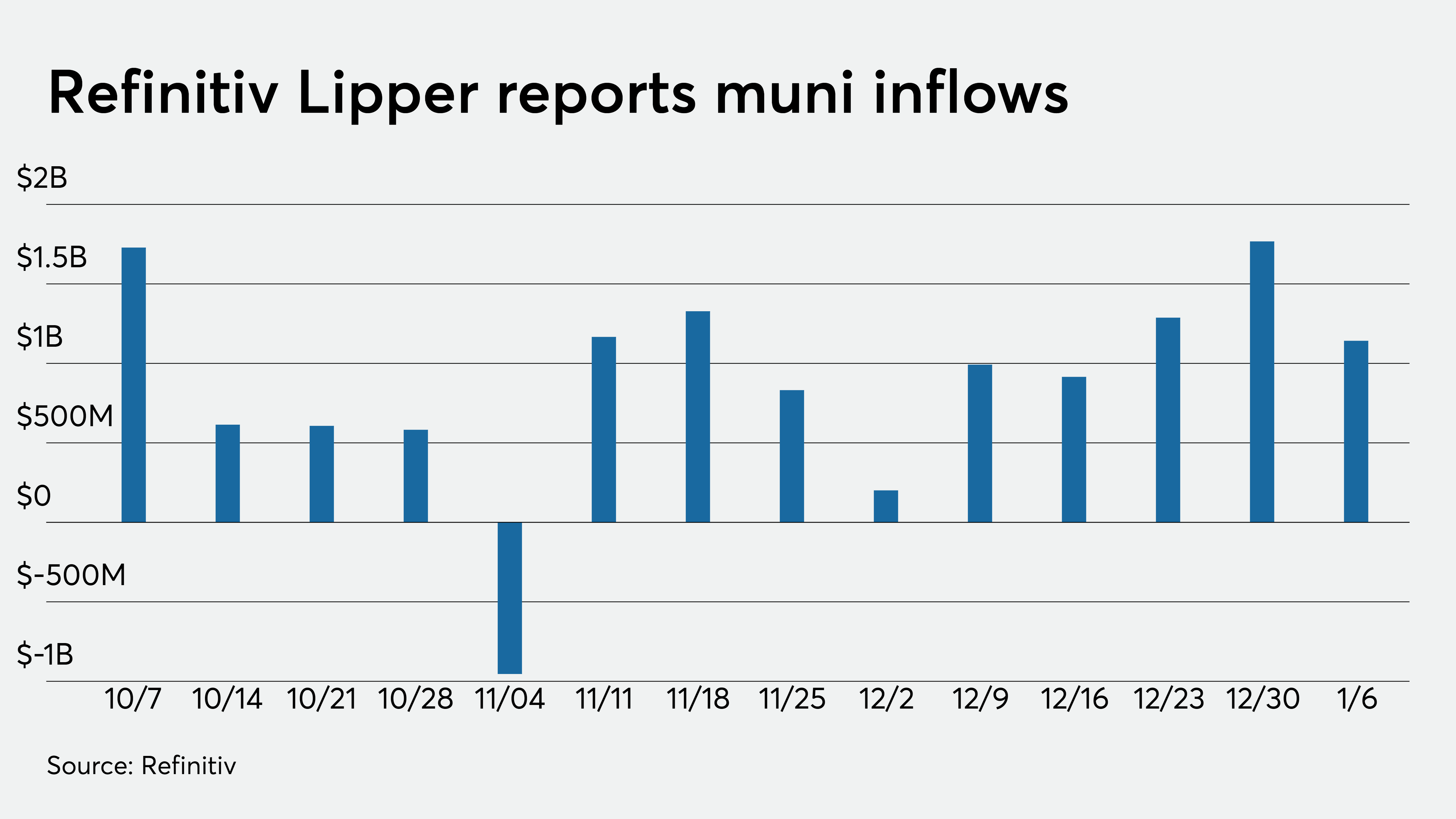 Municipal yields rose in secondary trading, being pulled higher in sympathy with overall rates despite very little issuance over the past few weeks, leaving a lot of cash still on the sidelines while inflows into municipal bond mutual funds continue.

The market treated the ongoing turmoil in Washington as a single event that won’t have an impact on policy, stimulus or economic growth going forward, analysts and traders said, leaving participants to focus on technicals and a rising-rate environment.

It was inevitable that muni yields would need to rise somewhat as the U.S. Treasury 10-year broke above 1%, however participants said the supply/demand imbalance will hold municipals from increasing as quickly as Treasuries because of the massive amount of reinvestments in the pipeline and the money ready to be put to work.

“In fact, both the 5-year and 30-year municipal to UST ratios hit new trailing one-year lows Wednesday, illustrating just how much munis have outperformed,” said Greg Saulnier, managing analyst at Refinitiv Municipal Market Data. “Coupled with the reflation trade taking hold in Treasuries and causing yields to rise, tax-exempt buyers have stepped back over the last two days and sellers have shown a bit more flexibility.”

“The municipal market is obviously about the richest it’s been historically versus Treasuries,” as municipals have not yet risen as much and continue to outperform, their taxable counterparts, a North Carolina trader said.

“Deals like the $350 million New Jersey EDA, which offer significantly more yield than your typical Aaa-AA credits, are continuing to get gobbled up by primary buyers until some real weekly supply figures return,” Saulnier said.

“There is still a lot of pent-up demand for high-grade, high-yield and taxable supply because the market is starved for supply,” the North Carolina trader said.

Overall, municipal yields were one to four basis points higher throughout the yield curve on Thursday, the trader said.

“Some bonds are tighter and some are wider, depending where they are on the curve,” the trader said. The weakness was impacting the primary market, creating noticeable concessions on new issues, such as the New Jersey EDA school construction offering priced on Thursday, according to the trader.

“New issues are being well received and offering concessions of around 10 basis points higher in yield than where they would normally be priced,” he said.

“Overall, it was a very strong and robust start to the year, month, and week, but today is the first day in a while the market is seeing a little weakness, and taking a pause,” the trader said.

The protests in Washington, D.C., on Wednesday contributed to a sharp adjustment in Treasury yields, with the 10-year benchmark climbing to 1.078% on Thursday, after hitting its highest level since March a day earlier; however, the expectation of a rising-rate environment in general had more to do with the spike.

Going forward next week, issuance is again expected to be light, the trader said, noting it is still too early to tell if the current weakness will be short-lived.

“It depends on new issuance and whether or not there is selling pressure,” the trader said. “At these ratios and low yields, some investors might decide to sell the asset class and buy something more attractive,” if the current market technicals persist for an extended period.

“Everyone is sitting on the sidelines waiting for yields to correct, but I think we will start to get some clarity now that we will have an all-Democratic Congress,” he said.

Others were less sanguine about potential risks following the takeover of the U.S. Capitol Wednesday and subsequent headlines coming out of Washington.

“There’s heightened event risk for the next few weeks, and maybe the next year, more risk for potential violence,” said Matt Fabian, partner at Municipal Market Analytics. “Does that interrupt what would otherwise be a recovery?

“You have to also consider that COVID is still getting worse every day. Things are getting worse. It’s hard to say we are in a recovery,” he added. “Does this political volatility deepen the economic contraction or extend the period by which we wait for recovery?”

“Everyone thought when 2020 was over the world would go back to normal. We are seeing a light at the end of the tunnel, but I think we probably won’t see it until the middle or end of 2021,” the North Carolina trader said.

The four-week moving average remained positive at $1.278 billion, after being in the green at $1.240 billion in the previous week.

“I expect that, as we recover, the economic picture will remain uneven, with wildly unequal outcomes across sectors of the economy,” he said in a virtual speech, according to prepared text released by the Fed. “There’s a strong chance that consumer habits will have changed long term, even when we’ve finally rid ourselves of COVID-19. That will have significant impacts.”

Video could take the place of business travel “indefinitely,” he suggested, which would impact hotels and restaurants, while increased online shopping would be negative for “the physical retail industry,” Harker said. “And higher education ― my old industry ― faces major threats not only from changes brought on by the pandemic, but also from the country’s demographics. The traditional college-age population has actually begun to decline.”

Separately, the international trade deficit widened to $68.1 billion in November from $63.1 billion in October.

The Institute for Supply Management’s December services PMI index rose to 57.2 from 55.9 in November. Economists expected a 54.6 read.