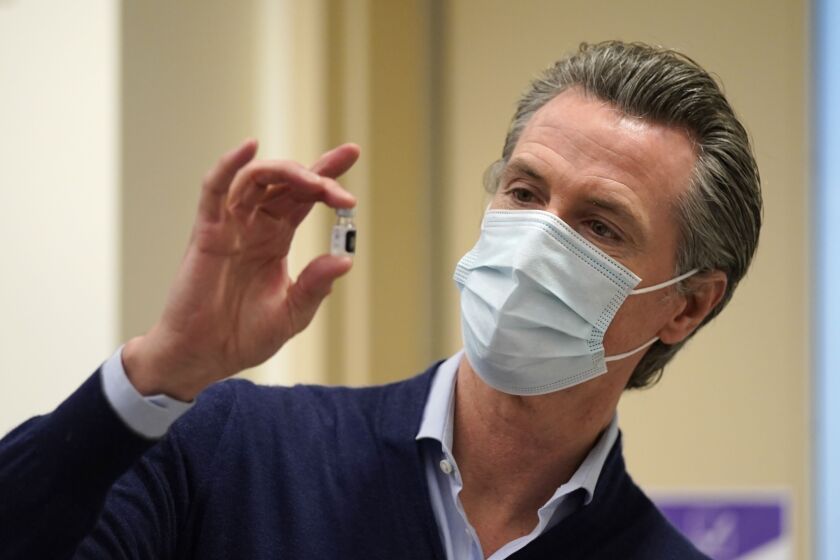 The continued escalation of COVID-19 cases in California and the resulting economic volatility took precedence as Gov. Gavin Newsom unveiled his $222.2 billion budget proposal for fiscal 2021.

Newsom wants to spend some of the money from a $26 billion income tax windfall, but also set aside $22 billion for reserves while pinning some hope on a larger aid package from President-elect Joe Biden and the soon to be Democratic-controlled House and Senate.

The governor had said earlier in the week that a $4.5 billion economic recovery package would be part of his budget proposal and that he would dedicate $300 million to COVID-19 relief efforts.

He also announced a Golden State Stimulus that would provide $600 in cash directly to 4 million low-income Californians, including those excluded from the federal stimulus, like undocumented households that file taxes with an individual taxpayer identification number.

The governor also asked lawmakers to extend protections against evictions to ensure California’s $2.6 billion share of federal rental assistance be distributed according to the greatest need and with accountability.

“Through the Golden State Stimulus, Californians who have been impacted by this pandemic will get help to provide for their families and keep a roof over their heads,” said Governor Newsom. “This plan will provide relief for Californians in need by distributing $600 rapid cash support — for some, at least $1,200 when coupled with federal relief — and extend the eviction moratorium.”

He said he wants to get 4 million checks out to people within three weeks of his signing this package.

“All of this is happening in real time,” Newsom said. “It’s an incredible moment in terms of anxiety around the pandemic, but also incredible in terms of opportunity.”

Despite the current challenges, Newsom said the state is in a better place than it was last summer when it faced what was projected as a $54 billion deficit.

This year’s $227 billion spending plan represents a balanced budget with $34 billion in reserves and surplus, he said.

Legislative Analyst Gabe Petek released a report in November estimating the state would have a one-time $26 billion windfall.

Income taxes came in better than anticipated because affluent Californians, who provide the bulk of income taxes, have largely maintained their income streams by working from home.

Newsom said his budget would add $5 billion to housing production, through tax credits, loans, infrastructure grants and more. It would also spend $1 billion for wildfire resilience to protect existing homes, he said.

The budget proposal would dedicate nearly $90 million for K-12 in the state.

It would also dedicate $10 billion to infrastructure through spending under Senate Bill 1, a gas tax bill approved by the Legislature in 2017.

“The governor’s shutdowns and COVID-19 challenges have made it difficult for millions of Californians,” Grove and Nielsen said in the joint statement. “More than 19,000 small businesses have already closed their doors for good and with them are countless families who depended on that income to pay for food housing and other necessities.”

He ended his budget address on a sober note, however, saying that everyone needs to be mindful that economic forecasts are very, very tenuous given the realities of the pandemic.

Price analysis 12/5: SPX, DXY, BTC, ETH, BNB, XRP, ADA, DOGE, MATIC, DOT
BTC price levels to watch as Bitcoin holds $17K into the market open
An uphill battle could await activist Trian as the firm snaps up a stake in Disney
Just 8% of Americans have a positive view of cryptocurrencies now, CNBC survey finds
Thanks to Ethereum, ‘altcoin’ is no longer a slur