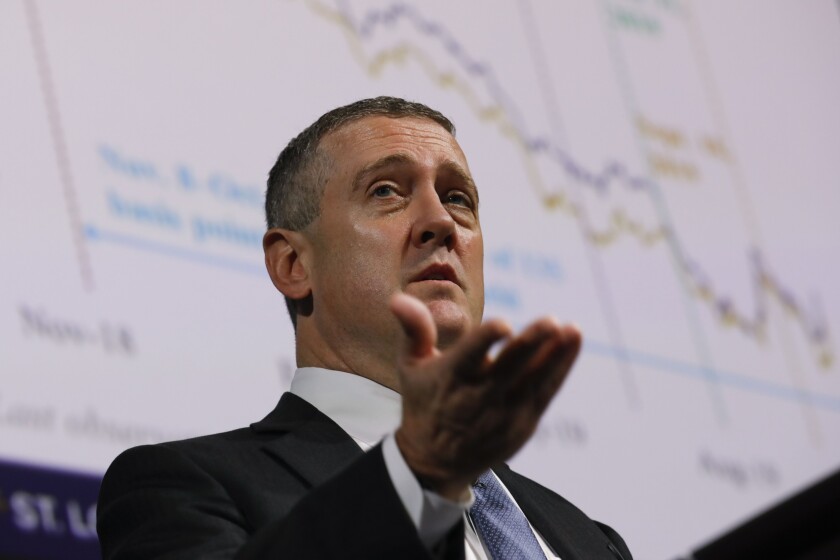 It’s premature to discuss reducing the amount of monetary-policy support for the U.S. economy while the pandemic is still raging, said Federal Reserve Bank of St. Louis President James Bullard.

“We want to get through the pandemic and sort of see where the dust settles, then we will be able to think about where to go with balance-sheet policy,” Bullard said Tuesday during an online interview with the Wall Street Journal, noting that the outlook will hinge on the successful rollout of COVID-19 vaccines and the path of the virus.

“We are going to have to see how all of that proceeds here going forward. Then we will be in a position to make a judgment,” said Bullard, who is not a voter this year on the rate-setting Federal Open Market Committee.

His remarks are the latest from officials on whether the Fed should debate tapering bond purchases later this year, which has caught the attention of investors as the yield curve steepens and rates on 10-year Treasuries push to the highest levels since March.

Bullard welcomed the increase in the spread between short- and long-term debt.

“I would consider it an encouraging sign that the Treasury 10-2 spread is returning to more normal levels for an expansion,” he said. “I think markets are hoping to see the end of the pandemic in 2021. They’re hoping to see good growth going forward, and because of that you’re seeing the yields normalize. So I think that’s a good outcome.”

The Fed last month signaled interest rates would stay near zero at least through 2023 and pledged to keep buying bonds at a $120 billion monthly pace until “substantial further progress” had been made on its employment and inflation goals.

Biden says he is prepared to speak to Putin about ending Ukraine war
The impact of CBDCs on stablecoins with Bitget’s Gracy Chen
Price analysis 12/2: BTC, ETH, BNB, XRP, ADA, DOGE, MATIC, DOT, LTC, UNI
Florida lawmakers will hold special session on property insurance
Hong Kong home prices drop to the lowest in nearly five years — and the worst may not be over