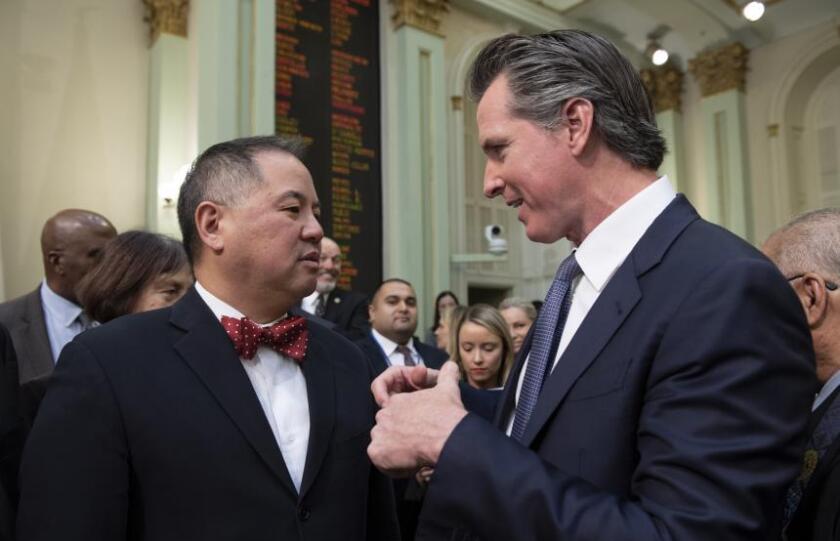 The budget process typically gives lawmakers until June to approve a budget, but Newsom, citing the coronavirus pandemic, highlighted several areas where he wanted money allocated in the next several weeks.

Newsom had asked the Assembly to approve $5 billion within the next several weeks with $2 billion to reopen elementary schools once COVID-19 conditions allow and a $3 billion plan for direct relief to Californians and businesses, most of which would be spent providing $600 checks for about 4 million of the state’s lowest income residents.

Another $6.5 billion in pandemic response efforts would be considered in the spring during the normal budget cycle that ends with lawmakers approving a budget in June. The bulk of that is for $4.6 billion to help students who have fallen behind as a result of remote learning. It also includes workforce training for teachers and money to purchase hotels for homeless housing and a boost for zero-emission vehicle incentives.

Legislative Analyst Gabe Petek and his staff testified about budget recommendations they had published in a report Sunday, in which they said some of the governor’s “immediate” budget proposals could be considered during the normal budget cycle.

He added the focus should be in addressing more immediate needs, like the expiring eviction moratorium for renters, and for undocumented workers, who would receive $600 relief checks, but aren’t included in federal efforts.

“We think it would be better for the state to target the $2.4 billion [in state $600 stimulus checks] to people who are not beneficiaries of the federal program,” Petek said.

The state’s budget efforts should “complement, rather than duplicate” funding provided by the federal government, Petek said.

Areas Petek highlighted where he and his staff had concerns included the $2 billion incentive for elementary schools to resume in-person instruction.

He added that the LAO thinks the small business proposals are reasonable and worth considering.

As for the entirety of the $7.8 billion included in the early action proposals, the LAO said lawmakers need to consider whether they can be considered during a longer time frame. Those questions are: Is there sufficient evidence that this is a pandemic-related problem? Is it time sensitive, or maybe some of the funding could be included now, and some later. And, is there a way to evaluate the potential for success in programs that are being funded?

The governor’s proposal to include incentives for people to buy electric cars in the more rapid tranche of funding was criticized by several lawmakers, who said lawmakers should be focused on more immediate needs like doing more to help people who are homeless as a result of mental health or addiction problems.

“We have more going to EV car infrastructure, than we do to small businesses,” said Assemblyman Jim Wood, D-Santa Rosa. “We have over 400 million small businesses in this state.

“As a member of this committee, I am saying that we need to make sure our priorities are cascading enough that they have a waterfall effect,” Wood said. “Whatever we address needs to affect more people. Addressing the pandemic is paramount and helping people who are hurting financially to get to a better place. We need to make sure that wherever we put the money gets the job done.”

Assemblyman Jim Cooper, D-Elk Grove, added that while he supports efforts to combat climate change, he doesn’t think the priority right now should be on spending to build EV infrastructure when he has constituents who are homeless and living in their cars.

“We have spent a ton of money over the years on EV infrastructure – and we are paying people to buy electric vehicles, and yet we have people living in their cars,” Cooper said. “If you ask the average person, they would say “yes, I believe in climate change, but my priority right now is basic survival, like being able to pay my bills. I think incentives for EV cars is tone deaf right now.”

Not all lawmakers were opposed to including money for EV stations. Some lawmakers said car emissions are creating health conditions for constituents in low income areas that are hit harder by the state’s air quality problems.

James Gallagher, R-Nicolaus, said he agreed with the need for immediate action proposals, but thinks the LAO was correct in saying that the money needs to be targeted to people with the most dire needs.

“I’m optimistic we will reach the light at the end of the tunnel later this year, as vaccination rates increase,” Ting said. “Until then, we must continue to stabilize Californians and small businesses struggling during these unpredictable times. We can accomplish that by maintaining the programs and services they need, while also forging a path to economic recovery.”