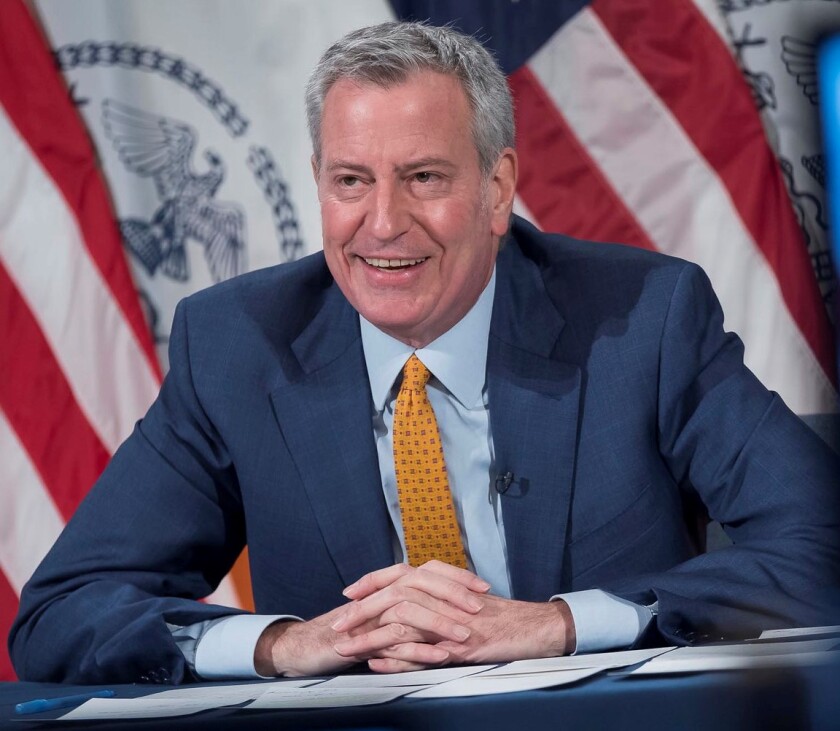 The lingering COVID-19 crisis makes them more poignant than past advisories.

De Blasio on Thursday said the spending plan, the final one for the term-limited mayor, “demonstrates caution in the face of steep revenue shortfalls and risk of state cuts.”

The city, he said, must still close a fiscal 2022 budget gap of roughly $5.25 billion, up from the $3.75 billion projected in November. He said he is looking for $1 billion of labor savings.

De Blasio did receive a shot in the arm from U.S. Sen. Charles Schumer, D-N.Y., who said President-elect Joe Biden intends to reverse the policy preventing full reimbursement for coronavirus-related expenses. That will mean a combined $2 billion for the state and city,

Budget adjustments are subject to federal stimulus, state cuts and further declines in property tax receipts, de Blasio said. The plan is up fractionally from the $92 billion update de Blasio released in November.

It includes an agency-wide program to eliminate the gap, or PEG, de Blasio said from the City Hall Blue Room. The mayor said it contains new investments to battle COVID-19.

The City Council must approve it by July 1. After a round of council hearings, de Blasio will present an updated executive budget around late April.

The 10-year capital plan is $119 billion, with an emphasis on affordable housing, pedestrian and cyclist enhancement, road and bridge repair, clean water and climate-change initiatives.

Business shutdowns and other measures to confront the coronavirus have gutted the city’s revenue streams. The city sustained a $10.5 billion drop in its tax revenue over fiscal 2020-2022, including a $1.5 billion decline since November in this fiscal year and the next.

“Unfortunately, nearly one year into the fiscal crisis, the city still has not substantially embarked on the significant restructuring and spending restraint needed to stabilize its long-run finances.”

The city, according to de Blasio, has had to spend $5.9 billion on COVID-19 related expenses, with federal reimbursement not covering roughly $1.3 billion of that.

Democratic control of the U.S. Senate — with a 50-50 tie and new Vice President Kamala Harris poised to vote Democratic to break any tie — could help the city, but the extent of which is still a variable, de Blasio warned.

Property tax revenue, according to the mayor, declined by $2.5 billion in fiscal 2022 — the biggest drop in that category since 1996 — due to a reduction in assessed property values, though growth in business and personal income taxes partially offset that.

The city financing program projects $53 billion of long-term borrowing for fiscal 2021 to fiscal 2025 to support the capital program, excluding $981 million planned for education purposes through building aid revenue bonds. The city will split the portion of the capital program not financed by the New York City Municipal Water Finance Authority between general obligation bonds and future tax-secured bonds of the Transitional Finance Authority.

Given the TFA is near its statutory limit on BARB debt outstanding, the financing program reflects BARB issuance so as to remain under the limit, according to budget officials. The City and TFA future tax-secured credits expect to issue $21.2 billion and $23.6 billion, respectively, during the plan period.

Layoffs, de Blasio said, would be an option only if the next federal rescue package comes in far less than desirable.

“We’re still going to need labor savings,” he said. “But the more support we get, the more we can say layoffs are only an absolute last resort and something we hope we never even have to contemplate.”

The state has threatened to cut $8 billion from localities, which could mean up to $4 billion in cuts for the city. Gov. Andrew Cuomo is scheduled to release his fiscal 2022 next week.

Cuts could relate to education, healthcare and Medicaid. De Blasio called on state lawmakers to raise taxes on wealthy people.

The federal government has allocated to the state $4 billion in federal stimulus aid for K-12 schools, and de Blasi said the city is owed at least half. “The state must release this aid without supplantation,” he said.

This money, he added, will go toward reopening costs the city has already incurred, reopening needs for September and closing what he called the COVID achievement gap.

The preliminary budget, said de Blasio, reflects $2.2 billion in savings over fiscal 2021 and fiscal 2022, including $1.3 billion in PEG savings.

“It is too small and appears to disproportionately target program reductions, instead of improving productivity or modifying employee benefits, both of which would minimize pain to New Yorkers at large,” CBC’s Rein said.

According to Rein, the fiscal 2023 gap of $4.3 billion and is “likely understated” by $1 billion of labor savings the administration has thus far failed to achieve. “A stronger partial hiring freeze is a good step; headcount reductions are needed and should be made permanent,” he said.

The city actuary, meanwhile, is proposing changes that would allow the city to use pension investment gains now instead of having to wait and take them in increments over six years.