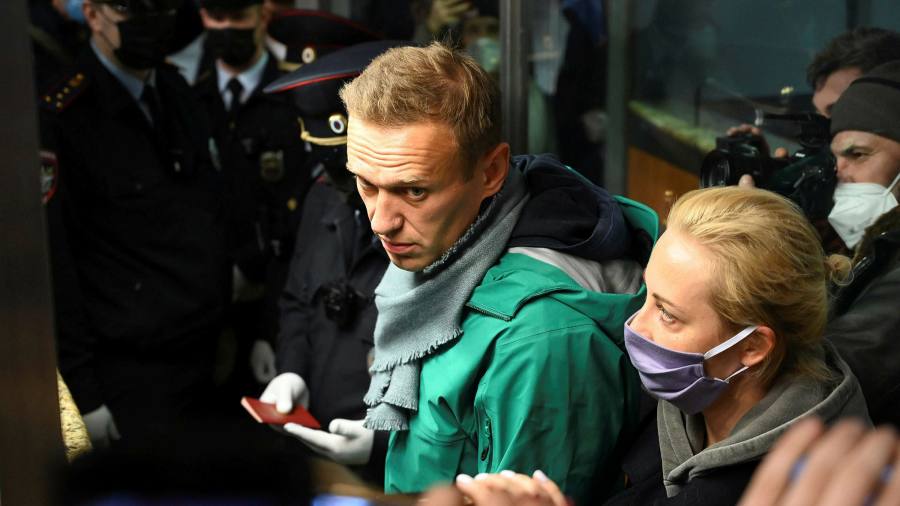 Russian opposition activist Alexei Navalny was detained by police on Sunday evening as he landed in Russia, having returned from Germany where he had recovered from an assassination attempt blamed on the Kremlin.

Mr Navalny, President Vladimir Putin’s best known and most outspoken critic, was detained upon arrival in Moscow, after his flight from Berlin was diverted from Vnukovo airport where hundreds of his supporters had gathered and clashed with riot police.

In a joint statement, EU members Estonia, Latvia and Lithuania described his detention as “completely unacceptable” and called for “restrictive measures” if he was not released. “ [The] EU should act swiftly and if he is not released, we need to consider imposition of restrictive measures in response to this blatant act,” the countries’ foreign ministers said.

The 44-year-old anti-corruption activist and political organiser was airlifted to Berlin in August after being poisoned with the Soviet-developed nerve agent novichok while on a campaign trip.

He and many western governments blamed the attempted assassination on the Kremlin, which has denied being involved and made various claims including that he was poisoned after leaving Russia, possibly by the CIA.

Mr Navalny’s street protests, exposés of government corruption and political campaigns that have helped unseat Mr Putin’s allies have proven a big irritant to the Kremlin in recent years.

His attempted assassination and Sunday’s detention come as he and his team prepare for September’s parliamentary election, with support for Mr Putin’s ruling party at record lows.

Announcing his intention to return earlier this week, he said he was not daunted by threats from Russian authorities to arrest and lock him up, claiming they were trying to force him into voluntary exile.

His return is a direct challenge to Mr Putin’s government, given that his jailing could spark large-scale protests at home and increased condemnation abroad.

“I am not afraid. I know that I am right. I know that criminal cases against me have been fabricated,” Mr Navalny told reporters after his plane landed, in remarks broadcast by TV channel Dozhd.

Minutes later, footage showed him being detained while passing through passport control at Moscow’s Sheremetyevo airport, pausing to kiss his wife goodbye before he was led away by police.

Russia’s prison service said that he had been detained for repeated violations of the terms of a suspended prison sentence. “Ahead of a court ruling, he will remain in custody,” it said in a statement provided to state-run news agencies.

Mr Navalny was detained at the capital’s main airport, after his flight was redirected minutes before landing at its scheduled arrival airport on the other side of the city, where his supporters had gathered.

“Navalny’s reception by the authorities at the airport is the best evidence of how afraid they are of him. They themselves are inflating the importance of Navalny,” Andrei Kolesnikov, chair of the Russian Domestic Politics Program at Carnegie Moscow, wrote on Twitter.

While his plane was in the air, police arrested 37 people, including two of Mr Navalny’s closest associates, who were waiting at Vnukovo airport. Riot officers forced a large crowd of waiting supporters and journalists out of the airport building, where dozens of police vans had congregated during the day.

“Of course, this is quite in the style of Putin — another special operation,” said Tatiana Stanovaya, founder of R. Politik, a Russian political consultancy.

Moscow’s prison authorities have accused Mr Navanly of breaking the terms of a suspended sentence imposed for a 2014 fraud conviction. If found guilty he could be sentenced to three-and-a-half years in jail.

The European Court of Human Rights has ruled that the conviction was politically motivated. Russian investigators said last month they had opened a new fraud case against Mr Navalny that carries a maximum 10-year sentence.

His poisoning with a banned chemical weapon provoked condemnation from European capitals, sanctions against six Russian officials and has further soured relations between Berlin and Moscow.

Last month, Mr Navalny published an investigation he said confirmed he was poisoned by the FSB, Russia’s main security service, and then published a recording of what he said was one of the alleged hitmen confessing to the novichok attack.

Fargo-Moorhead flood risk management P3 wins Deal of the Year
MATIC attack: How smart crypto traders ‘got out’ before a 35% price drop
Bullish on Bitcoin, US Senator Ted Cruz wants Texas to be a crypto oasis
Europe cuts gas demand by a quarter to shed reliance on Russia
Hong Kong home prices drop to the lowest in nearly five years — and the worst may not be over