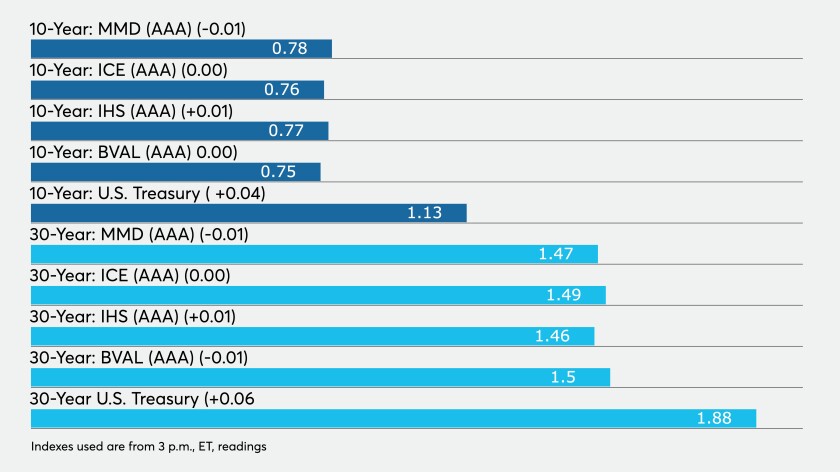 Municipals were on autopilot in the secondary with rates holding at Wednesday’s levels as U.S. Treasuries weakened on stimulus news. New-issues from Cook County, Illinois and Pennsylvania turnpikes repriced by 10 to 15 basis points and gilt-edged Columbus, Ohio, also repriced to lower yields.

Supply scarcity coupled with pent-up demand amid the seasonal redemption season is putting a focus on the secondary market.

“Due to the lack of issuance, secondary trading is strong,” John Farawell, executive vice president and head of municipal trading at Roosevelt & Cross, said Thursday.

The short end of the yield curve, however, is difficult for cash-flush investors to swallow, he noted. “Nominal yields are not all that attractive,” Farawell said. “People don’t want bonds below a 0.20%.”

Overall, the municipal market showed little change on Thursday following the jobless claims report, according to Farawell. Initial jobless claims spiked to a five-month high of 965,000 versus the 789,000 expected. “The market seems like it’s firmed up a bit — it’s basically treading water,” he said Thursday afternoon.

Looking at the new-issue calendar, it bears dissecting to see why there has been such a big disconnect between tax-exempt and UST rate movements, said Kim Olsan, senior vice president at FHN Financial.

Of all scheduled issuance priced this week, 36% fell under taxable structures.

“For nearly a month now the market has had to contend with either smaller issuance or structures with truncated maturity schedules — at the point enough tax-exempt volume cycles through in scalable size will secondary bidding feel inclined to respond in a bigger way,” Olsan said.

And while the pendulum swung back toward more muni value with the rally in USTs on Wednesday, it gave some relief to ratios but little to absolute yield ranges as triple-A benchmarks barely budged on Wednesday and Thursday.

“While the 10-year UST has retreated from its 2020 closing yield of 0.91% to trade as high on an intraday basis as 1.18% recently, the comparable AAA rate has been 66% less volatile,” Olsan noted. “A better alignment in the two markets does, however, help improve conviction levels during an active reinvestment period.”

High-grades in the secondary are reinforced by new issue levels as well.

Olsan noted a sale of Aa1/AAA D.C. Income Tax Revenue 5s due 2031 at 0.89% (call 2029) worked out to just about 80% relative value — but where the absolute rate captures more than 60 basis points extension value from five years.

“Conditions are likely to favor sellers considering the expected mismatch between redemptions and expected supply through the end of the month,” she said.

Olsan looked at considerations for tax-exempts and taxables and pointed out several trends.

Short bonds are steadily trading on or through implied AAA spots the longer daily and weekly floater rates hold in single-digit yields (SIFMA muni swap index at 0.06%). For some inquiry, the defensive option is part of a broader portfolio mix. As an example of ongoing compression, a 2026 soft-put new-issue from Aa3/AA- Lansing, Michigan, Utility System priced at 2% to yield 0.50%, or just +28/AAAs.

“Some of that compression is explained by the rally having priced out usual buyers of 5s with premiums exceeding $130 (which also has created more demand for shorter calls where the dollar premium is reduced),” Olsan said.

Taxables are a different story.

A year ago AA taxable munis were pricing around +75/10-year UST. Better value emerged later in the year when in late September, Louisiana priced a GO issue that offered the 2032 maturity +119/10-year UST. That bond is now trading around +50/10-year UST, she said. Rather than higher 2020 volume creating wider spreads, market appetite has shaved spreads to tighter levels.

Recent weakness in UST yields have exaggerated the move in spreads. In short maturities, the 5-year taxable/UST spread has tightened 31 basis points, 10-year taxables are 47 basis points tighter and the 20-year range is in 40 basis points.

“There is an inflection point where spreads will have to be balanced against generally strong credit profiles,” Olsan said. “Nearly $2 billion is slated in the taxable sector during January with expectations for more refunding volume to come.”

“Investors were sanguine about Columbus today,” said Megan Kilgore, Columbus city auditor. “We benefitted from a strong flight to quality and what appeared to be first-time interest from diverse buyers.”

Fed’s Powell: Rates to stay put
Federal Reserve Board Chair Jerome Powell said with the weakness in the labor market, and being “a long way from maximum employment,” it’s “unlikely that wage pressures” will soon hit “a level that will support higher inflation.”

When the pandemic ends, there could be “exuberant spending” that could cause price pressure, but that should not be long-term, he said during a Princeton University livestream. But if inflation surprises and grows too much, he said, the Fed has the tools to tame it.

Powell reiterated that under the new policy framework, rates will stay put until inflation grows “moderately above 2% for a time,” which he said would be “no time soon,” or else the Fed will lose credibility.

Bryce Doty, senior vice president and senior portfolio manager at Sit Fixed Income Advisors, LLC, noted, “There is already massive fiscal and monetary stimulus in place that has created an elevated savings rate. The accumulated savings is burning a hole in consumers’ pockets and is ready to fuel their pent up demand and desire to return to a more normal life style.”

That demand, he suggested “will be unleashed on a sharply contracted supply of goods and services in the areas of the economy hit worst by the pandemic. Hence investors’ rising inflation expectations.”

Economists polled by IFR Markets expected 780,000 claims in the week.

“While the latest jobless claims report is sobering, the $900 billion coronavirus aid package recently passed, and the promise of more fiscal aid coming shortly from the Biden administration, should deliver some much needed support to the unemployed and businesses in the current quarter until service sector businesses are allowed to reopen as more Americans receive the vaccine,” said Scott Anderson, chief economist at Bank of the West.

Import prices surged 0.9% in December, propelled by a 9.1% spike in petroleum prices, while export prices increased 1.1%.

The average seven-day simple yield for the 187 tax-free and municipal money-market funds was unchanged at 0.01% from the previous week.

The average, seven-day simple yield for the 777 taxable reporting funds remained at 0.02% from the prior week.

Overall, the combined total net assets of the 962 reporting money funds grew by $5.61 billion in the week ended Jan. 12.