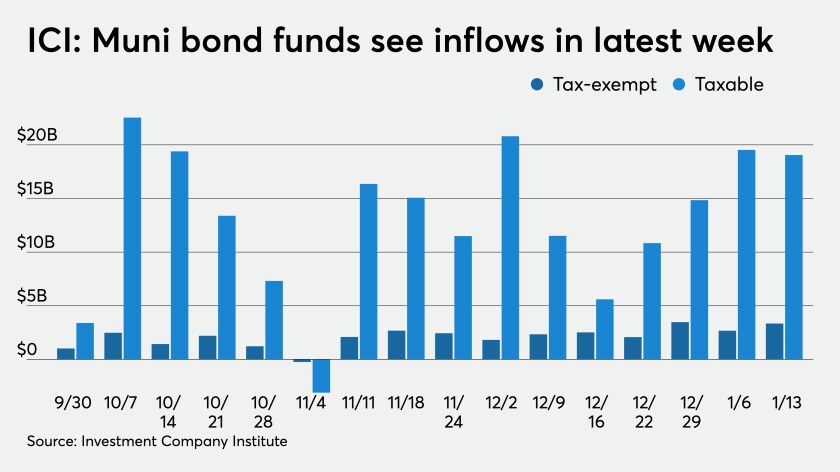 Municipal yields were steady throughout the day as the tax-exempt market saw the launch of the retail order period on $868 million of Port Authority of New York and New Jersey revenue bonds, N.J. turnpikes priced and Joe Biden was inaugurated as the 46th president of the United States.

Municipal bond yields on triple-A benchmarks were unchanged once again (five sessions in a row) and ratios were mostly unchanged.

Muni yields have been in a nine-basis point range since the beginning of the year while UST yields have fluctuated more than 20 basis points. With so little supply, muni credit spreads continue to compress.

Issuance remains sluggish but investors came off the sidelines to participate in the few large deals priced Wednesday with the backdrop of strong demand, according to a New York trader.

“New issues come and do well; there’s not an abundance of supply, but a lot of cash,” he said. “It’s the same story,” he continued, noting that the municipal yield curve from 2022 to 2051 has been unchanged by Refinitiv/Municipal Market Data for several trading sessions in a row.

“It’s steady again throughout the curve,” he said, adding that the presidential inauguration helped keep Treasuries firm, but stocks rose as the new administration brings with it market expectations of additional stimulus for state and local governments.

“As U.S. Treasury prices witnessed some support, muni yields have not followed suit, and rather have chosen to hold steady,” said Jeff Lipton, head of municipal credit and market strategy and municipal capital markets at Oppenheimer & Co.

“We are certainly experiencing a rather conventional January Effect, with active reinvestment needs and contained weekly calendars,” he added.

He noted the 10 consecutive weeks of positive flows into municipal bond mutual funds as evidence.

“We have no reason to think that this trajectory will shift any time soon given still ample amounts of sidelined cash,” Lipton said, agreeing with the trader that new issues are seeing welcome placement with oversubscriptions a common occurrence as demand remains strong.

“While relative value ratios have retraced modest ground, they are still historically low, displaying the relative richness of the asset class,” Lipton added.

The trader noted the Port Authority deal, recently downgraded by Fitch, is a combination of tax-exempt and taxable term bonds that were doing well in the order period Wednesday. Exempts with 5% coupons maturing in 2056 offered sub-2.00% yields at 1.97%.

“I haven’t seen any new deals that haven’t done well,” he said.

Meanwhile, in the competitive market, two school offerings led brisk demand for paper and were attractively priced on the long end.

A $274 million offering of Dallas Independent School District, Texas, triple-A unlimited tax school building bonds was competitively won by Bank of America Securities. The bonds were priced from 0.13% with a 4% coupon in 2022 to 1.93% with a 2% coupon in 2045.

Meanwhile, Wells Fargo won $125 million of Channelview Independent School District, Texas, unlimited tax school building bonds, which were priced to yield from 0.15% with a 5% coupon in 2022 — two basis points cheaper than the generic AAA scale — to 2.01% with a 2% coupon in 2046.

Lipton said until there is a material shift in market technicals or a policy change, municipal yields will likely hold to a narrow trading range and ratios of municipals to Treasuries will remain depressed.

“It would take a period of sustained muni underperformance before ratios move away from their historically rich position,” Lipton said. However, he is skeptical that ratios can move much lower, but does see continued prospects for municipal outperformance with “compelling” technicals.

While Lipton’s outlook calls for lower new issue volume in 2021, he noted that volatility in bond prices is likely given a new administration with “a re-focused agenda, an uncertain rollout of the COVID-19 vaccine, and what will likely be further evidence of a choppy recovery.”

In the previous week, muni funds saw a revised inflow of $3.180 billion, originally reported as a $3.482 billion inflow, ICI said.

Taxable bond funds saw combined inflows of $19.053 billion in the latest reporting week after a revised inflow of $20.631 billion in the prior week, originally reported as a $19.527 billion inflow.

ICI said the total combined estimated inflows from all long-term mutual funds and ETFs were $23.090 billion after a revised inflow of $23.811 billion in the previous week, originally reported as a $23.877 billion inflow.

The average seven-day simple yield for the 185 tax-free and municipal money-market funds was unchanged at 0.01% from the previous week.

The average, seven-day simple yield for the 777 taxable reporting funds remained at 0.01% from the prior week.

The economy
The only economic indicator released Wednesday showed builder confidence slipped in January. An increase in lumber prices and other materials combined with a rise in coronavirus cases was blamed for a drop to 83 from 86 in the NAHB/Wells Fargo Housing Market Index.

Economists polled by IFR Markets expected the index to hold at 86.

The current sales conditions index slid to 90 in January from 92 in December, while expectations declined to 83 from 85 and traffic of prospective buyers dropped to 68 from 73.

Separately, Megan Horneman, director of portfolio strategy at Verdence Capital Advisors, addressed the rise in rates on the 10-year Treasury, which is up 60 basis points since August. “The rise in yields has been gradual and has taken place over the past five months and is more of a normalization off emergency type levels,” she said. “The rise is also the result of the outlook for future growth, especially with a vaccine, and that has also translated into better earnings growth potential.”

The economy is “rebounding nicely,” he added, and he expected a full recovery by midyear. “That’s a surprising turnaround,” Colbert said, since it generally takes longer to recover. For example, GDP wasn’t back to levels from before the Great Recession until three years after.

Fed won’t be raising rates for a long time, he said because the “output gap is still largely driven by the employment sector,” which is still 9.8 million jobs lower than before the pandemic.

The Fed, he said, “will let the economy run hot for quite a while, until employment recovers.”