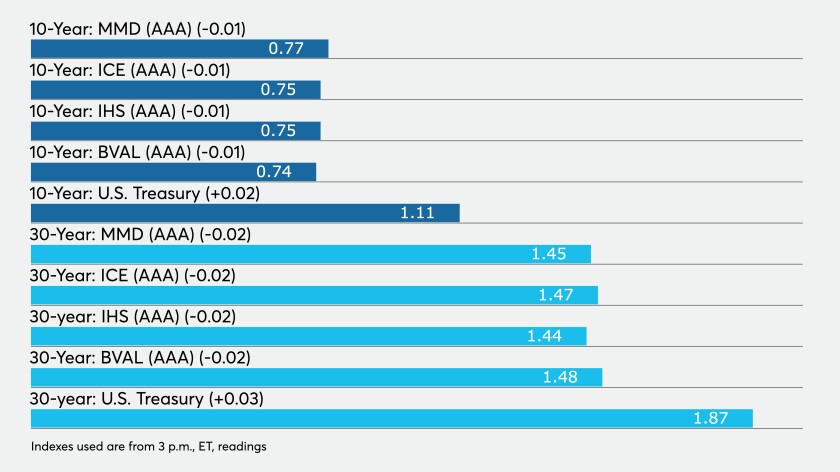 Tax-exempt yields fell one to two basis points Thursday, the first time in a week there was movement in triple-A generic benchmark scales, as the imbalance of supply versus the pent-up demand persisted and Refinitiv Lipper reported another multi-billion week of inflows, the 11th consecutive week of inflows.

The Port Authority of New York and New Jersey saw yields on its exempt and alternative minimum tax bonds bumped in institutional pricing from Wednesday’s retail offering by as much as 10 basis points in some maturities.

Florida Board of Education took its gilt-edged credit off the day-to-day calendar and competitively sold $134 million to BofA Securities at attractive levels.

“There still seems to be good interest for bonds across the board, and certainly all coupon structures seem to be seeing good activity,” a Charlotte, North Carolina-based trader said Thursday.

“Depending on the coupon structure, as the week has progressed the amount of opportunity was very limited,” and bid-wanted activity in the secondary market has slowed, the trader said.

“Anyone looking to put money to work has pretty much held the market in check,” he said. Any new issuance that has come to market has been sold with little effort, as unspent January redemptions from coupon and maturity payments are flush in investors’ accounts.

“In addition to optionality and couponing playing much larger roles in allocations,” the nuance of credit choices is also having an effect, she said.

Olsan notes that ICI flows since the March-April 2020 selloff totals nearly $70 billion, two months’ worth of new issuance. The domino effect from such strong inflows is that secondary selling doesn’t need to be so active, creating fewer opportunities for new inquiry.

“That component, along with the share of taxable supply that has cycled through, are the drivers behind rates holding so steady and so low,” she said.

The housing and manufacturing sectors remained strong, while the number of people filing for unemployment benefits, despite dipping, remained quite high.

Housing starts and building permits jumped in December, as low mortgage rates fueled the growth, but experts warn regulation and the cost of lumber could become headwinds.

While the coronavirus throttled parts of the economy, housing has remained strong, as has manufacturing.

“Builder concerns about a changing regulatory landscape may have triggered many to move up their plans to pull permits and put shovels to the ground,” said National Association of Home Builders (NAHB) chairman Chuck Fowke. “Our latest builder sentiment survey suggests somewhat softer numbers ahead due to rising building costs and an uncertain regulatory climate.”

Single-family housing starts were the highest since September 2006, according to NAHB Chief Economist Robert Dietz. “And while NAHB is forecasting further production increases in 2021, the gains will be tempered by ongoing supply-side challenges related to material costs and delivery times, a dearth of buildable lots and regional labor shortages that continue to exacerbate affordability woes.”

However, “the worst of the housing shortage could soon come to an end,” said National Association of Realtors Chief Economist Lawrence Yun. “More inventory is clearly needed to lessen the heat of multiple offers and the consequent frustration of multiple losing bids.”

The manufacturing sector continued expansion, according to the Federal Reserve Bank of Philadelphia’s Business Outlook Survey. The general business activity index surged to 26.5 in January from 9.1 in December, while the six months from now index climbed to 52.8 from 43.1.