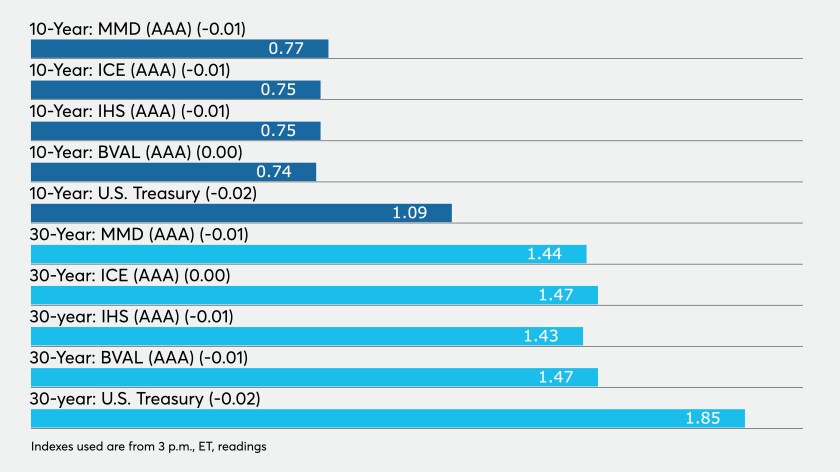 With a single basis point bump in yields across the municipal curve on Friday, the market readied for the new-issue calendar with the expected arrival of a $1 billion Texas Municipal Gas deal, several taxable and transportation deals, and a $260 million competitive deal from gilt-edged Fairfax County, Virginia.

A “perpetual calm” continued to fall over the municipal market on Friday as “relentless” inflows into municipal funds, combined with the shortage of traditional tax-exempt supply appears to be directing most aspects of daily market activity, according to Jon Law, vice president and portfolio manager at Advisors Asset Management.

The tone was similar to that of the trend of late, he said.

“The market has been absolutely resilient over the last two months, practically unfazed by this current reflation trade that’s been affecting most other financial markets and also responsible for the sizable backup in Treasury yields,” he said.

The fact that municipal benchmark yields are practically unchanged from their 2020 year-end levels — offset by rising Treasuries yields not seen in quite some time — is a testament to the strong grip the demand-supply imbalance has on the market, Law said.

“It’s also been undoubtedly responsible for these astonishingly low muni-to-Treasury ratios,” he said.

At the same time, that isn’t deterring investors’ interest, according to Law.

“We’re now at 11 consecutive weeks of inflows so lower ratios don’t seem to be having much of an impact discouraging traditional tax-exempt investors from adding more money, much less pulling their money out of the asset class,” he said.

As long as taxable issuance continues to eat into traditional tax-exempt supply like it has been so far this month and most of 2020, Law said, the current low-volatility market and steady conditions are likely to persist.

“Municipalities still do not have the ability to advance refund existing debt via tax-exempt financing and many continue to see the appeal of taxable deals being subject to less legal restrictions than the traditional tax-exempt route,” he said.

“Perhaps this outperformance was because munis lagged both of those taxable asset classes for most of 2020,” he said. “I don’t think it’s a complete stretch to suggest that the current market is a fairly valued market, at least more so than at any time post-COVID.”

Given that scenario, Law said, there are still areas of opportunity for investors to find value in the current market.

Besides venturing further along a gradually steepening municipal curve, he suggested, credit selection still provides sufficient opportunities for investors to pick up yields at levels significantly higher than benchmarks.

“Although the gap has significantly narrowed and credit spreads have dramatically tightened in recent months, bifurcation across various states and sectors of the market remains,” he said.

Given the constraints on supply currently — and expectations of future scarcity — Law believes the market has behaved as advertised so far in the first quarter.

“Unless something comes out of left field, I would expect tax-exempt yields to continue to trade within a tight range and the market to remain insulated from Treasury market volatility for the remainder of the quarter,” he said.

“Looking out a little further, the fact that Democrats have control — albeit slim — of all three branches of government is probably one of the better long-term scenarios for municipals,” he said. “Not only do states and local governments have a better shot of receiving additional fiscal aid to help fight this pandemic, the demand for municipals would be even greater than what it is now if higher taxes come into the picture.”

J.P. Morgan Securities LLC is set to price $560 million of unlimited tax general obligation and refunding GOs for the Board of Education of the City of Chicago (NR/BB-/BB/BBB-/).

UBS is also set to price $131.9 million of tax-exempt general obligation refunding bonds for the issuer on Tuesday. Serials 2021-2026.

Citigroup Global Markets Inc. is set to price $140.9 million of turnpike revenue bonds for the Ohio Turnpike and Infrastructure Commission (Aa2/AA-/AA/) on Tuesday. Terms in 2046, 2051.

Economic indicators
In the only economic data released on Friday, existing home sales grew 0.7% in December to a seasonally adjusted annual rate of 6.76 million from 6.71 million in November.

Sales were 22.2% better than the 5.53 million recorded in December 2019, the National Association of Realtors said.

“Home sales rose in December, and for 2020 as a whole, we saw sales perform at their highest levels since 2006, despite the pandemic,” said Lawrence Yun, NAR’s chief economist. “What’s even better is that this momentum is likely to carry into the new year, with more buyers expected to enter the market.”

“Although mortgage finance costs will rise gradually this year and next as the economy kicks into greater gear,” Brent Campbell, economist at Moody’s Analytics said, “homebuyers will still benefit from locking in mortgage rates well below the historical average.”

Lynne Funk and Gary Siegel contributed to this report.