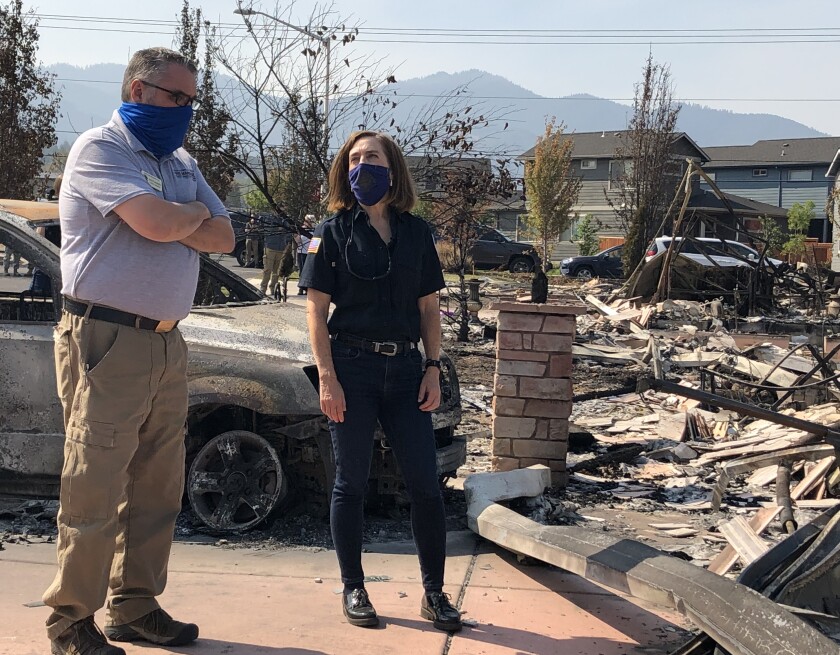 Gov. Kate Brown said in her annual State of the State address that she wants to rebuild from a place of racial and economic equality as Oregon attempts to recover from a year overshadowed by wildfires, violent protests and the pandemic.

Rating agencies have said social issues, including how states are addressing income inequality and ESG, are being considered in their analyses.

“As the end of May and into June, the untimely deaths of Black and Brown neighbors from across the country inspired Oregonians to march in our streets with a long overdue clarion call for racial justice,” Brown said. “Our state budget and policies must be built on a foundation of racial equity and inclusion.”

As in prior years, Brown lobbied for items in her proposed $26.5 billion 2021-23 budget released Dec. 1 that would support, if approved by the Legislature, the policy changes she champions. She also put out a call to the Biden-Harris administration to send money and support, as the state attempts to recover from the pandemic and bolster its defenses against future wildfires.

Brown took a different tact from the traditional in-person speech before a live audience, instead releasing a pre-recorded State of the State address online Thursday. That move was criticized by Republicans, who hold a minority in the state Legislature, and were not swayed by her speech. They have battled the governor and the Democrat-majority Legislature even staging a walkout during budget talks in 2019.

“Hidden behind all of the governor’s flowery words are crushing new taxes on businesses and working families who are already struggling to make ends meet,” Senate Republican Leader Fred Girord, R-Lyons, said in a statement. “No amount of sloganeering will unite Oregonians or solve the real issues they face.”

Republicans have opposed business and school closures ordered by Brown amid the pandemic. Brown lauded residents and businesses for heeding her orders and wearing masks and taking safety precautions, which she said has reduced COVID-19 related deaths.

“Today, Oregon has one of the lowest COVID-19 mortality rates in the country, and our daily case counts are among the lowest in the country,” she said, adding that 12,000 people in the state are being vaccinated every day.

“We must recognize that going back to the ‘way things were’ will not move us forward,” Brown said. “Every difficult turn of this past year has only proven this point, further exacerbating existing disparities for Oregon’s Black, Indigenous, Latino, Latina, Latinx, Asian, Pacific Islander, Native American and Tribal Communities.”

“I am committed to ensuring that the world we emerge from this last year is a more equitable one,” she added. “We must build back better.”

Oregon battled 2,027 fires across the state in fall 2020 even as residents and communities struggled under the weight of the pandemic.

“We lost nine Oregonians. We lost more than 4,000 homes, and more than 1.2 million acres burned,” Brown said. “And just as we began to steady ourselves from the most devastating wildfires in Oregon’s history, the pandemic’s second wave hit last fall. We had to take drastic measures again.”

Lawmakers already approved $800 million in COVID-19 aid and wildfire relief for communities decimated by the wildfire in a special session held December 15. Brown had postponed that third special session late into the year hoping to receive aid from the federal government.

The legislature also approved Senate Bill 5731 in the special session that included $600 million to allow the state to continue to fund critical pandemic-related programs into the first few months of 2021 and to provide support for Oregonians impacted by the wildfires. It also included $150 million for the Landlord Compensation Fund and $50 million in rental assistance, as defined in House Bill 4401.

The legislature has until June to approve the governor’s proposed budget.

As more and more Oregonians get vaccinated and the state looks to the future, Brown wants residents to not lose sight of the racial injustices that compelled them to march in the streets. Comparing waging battle against the state’s trio of crises to a marathon, she said “in a marathon, you have to play the long game. Your eyes must remain fixed on the horizon. And just when you think you can’t keep going, you take one more step.”

Revenues in Oregon, like California and other states dependent on income taxes, came out of better than anticipated earlier in 2020. Economic disparities saw people able to work from home retain their jobs, which kept the state from depleting reserves. But Moody’s Investors Service analysts noted in a September report the pandemic-induced downturn had been particularly hard on the state’s low-income workers.

Brown peppered her speech with a diverse group of speakers, rather than delivering the soliloquy common when governors deliver these annual speeches. Some of the speakers, Brown has elevated to lead commissions she created to help reverse the state’s long history of institutionalized racism.

Upper McKenzie District Fire Chief Christiana Rainbow Plews, a native American who became a celebrity for continuing to battle fires that scorched one million acres in the state even as she lost her own home and fire station to the Holiday Farm fire, also spoke.

After citing Rainbow Plews’ dedication, Brown said the state will invest not only in fire suppression, aid for communities devastated by the fires, but also in preventing future fires by creating healthier landscapes by thinning and controlled burns during the wet season. That was also when she put out a call for more help from the federal government.

She then returned to her message of combatting racism and racial disparities, which she said impacts every “single part of our culture and our economy.”

“The dual crisis of the pandemic and the fires has only accelerated these disparities,” Brown said. “We know that all Oregonians felt the impacts of the emergencies our state weathered last year, but the impacts were not all felt equally. That is why our state budget and policies must be built on a foundation of racial equity and inclusion.”