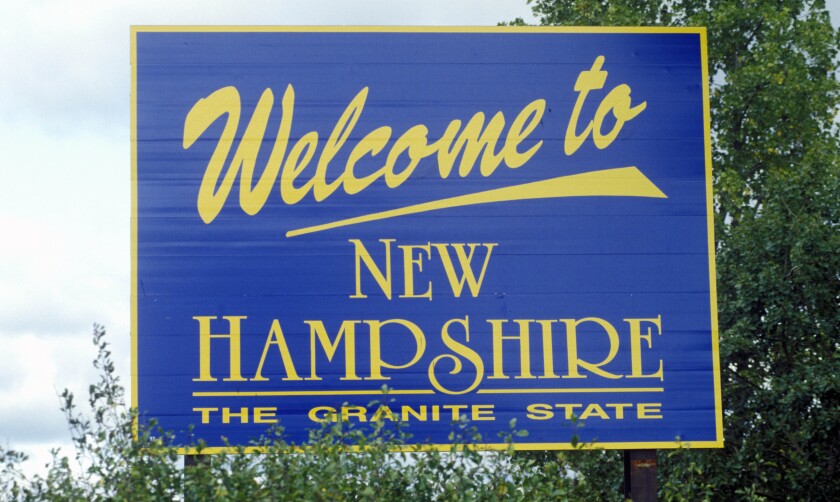 The age-old dynamic of state border wars takes on a new twist with workplace technology and a global health crisis spur an intriguing case that the U.S. Supreme Court could decide.

At issue in New Hampshire v. Massachusetts is whether states can impose income taxes on out-of-state employees who work at home during the COVID-19 pandemic.

If the justices hear the case, “it will present quite a challenge to the high court, on a number of levels,” said Sabino, an attorney in Mineola, New York.

New Hampshire brought the case to the top court directly as a dispute between the two states..

David Hitchcock, a senior director at S&P Global Ratings, said a ruling could result in the reallocation of billions of income tax dollars between certain states and thereby affect their credit.

“More broadly, the lawsuit could clarify the allocation among the states of taxable personal income generated from teleworking,” he said.

New Hampshire is challenging Massachusetts’ effort to tax remote workers of Massachusetts employers who live in the Granite State, which has no state income tax. New Hampshire says more than 103,000 of its residents, or roughly 15% of its workforce, worked for Massachusetts-based companies in 2017.

Massachusetts passed the measure last year, as the coronavirus pandemic shuttered offices and shifted many businesses to remote working.

The Supreme Court has asked the Biden administration for input while considering whether to hear the case. Much could hinge on the brief that the solicitor general files on behalf of the United States, possibly over the summer.

President Biden has yet to choose a permanent nominee, which the Senate must confirm. Elizabeth Prelogar is acting solicitor general.

“A fundamental issue that jumps out to me, and one that the solicitor general is sure to advise on, is whether this case presents a proper invocation of the Supreme Court’s original jurisdiction to resolve a dispute between two states,” said Michael Cullers, a partner at Squire Patton Boggs whose practice involves matters of tax-exempt bonds and state and local taxation.

New Hampshire argues that Massachusetts has infringed on its sovereignty by taxing the residents in question.

“New Hampshire’s injury, however, appears more theoretical than concrete,” Cullers said. “New Hampshire does not impose an income tax, so it is not losing revenue in respect of the residents who are now working remotely in New Hampshire.”

This, Cullers said, is unlike the situation between New York and New Jersey, where New Jersey grants a credit against its income tax for income taxes its residents pay to New York.

“This credit results in a significant loss of revenue to New Jersey in respect of its residents who are now working remotely for New York employers,” Cullers said. “New Jersey can more easily demonstrate than New Hampshire an injury caused by the action of another state. The apparent absence of a demonstrable injury could lead the solicitor general to advise that the Supreme Court does not have original jurisdiction over this case.”

Worth noting, according to Cullers, is whether the solicitor general advises that if a claim is valid, that it’s for the affected residents of New Hampshire, not for the state itself.

“The Supreme Court under Chief Justice [John] Roberts has not infrequently looked to procedural bases to dispense with cases, and that would be a potential outcome here if the solicitor general so advises,” Cullers said. “The court under Roberts has looked to finesse substantive issues, particularly difficult substantive issues such as this one, rather than confront them directly.”

While the pandemic prompted the New Hampshire-Massachusetts dispute — the two have frequently bickered over liquor purchases and other matters — the issue, said S&P’s Hitchcock, is not new or unique to those two.

“Taxes on out-of-state residents tend to be popular with the state imposing them and will likely not disappear without an adverse ruling from SCOTUS,” he said.

A win for New Hampshire would benefit states with many residents commuting out of state to work, such as New Jersey, Connecticut, Hawaii, and Iowa, Hitchcock said. That result would also reduce revenue for some states with large employment centers, including Massachusetts, New York, Arkansas, Delaware, Nebraska and Pennsylvania.

“We will be watching this closely as this could affect ‘taxable heavy states,’ which might prompt downgrades,” said David Loesch, owner of DRL Group, a Katy, Texas-based firm that sells municipal securities.

Lower-income workers could feel the pinch, according to Nicole Gelinas, a senior fellow at the Manhattan Institute for Policy Research.

“It’s a real risk as we get into work-at-home,” she said. “Wealthy people are aware of how the tax code works. A lot of people making lower than six figures are going to be fairly surprised.”

The credit impact on New Hampshire, Hitchcock said, is not immediately significant because New Hampshire lacks a personal income tax. Still, that state estimates that about 300,000 of its residents stand to benefit because they would avoid paying Massachusetts tax on roughly $6 billion of their collective income.

New Jersey estimates that during 2020 the state may credit up to $1.2 billion to its residents for income taxes paid to New York state while working at home in New Jersey.

Nine other states, with Ohio running point, have filed a friend-of-the-court brief in support of New Hampshire, arguing that the Constitution requires the Supreme Court to resolve disputes between two states.

A few states have imposed income taxes on out-of-state telecommuters, such as New York. Connecticut or New Jersey residents telecommuting for a New York City-based company have historically paid income tax to New York State regardless of residence.

While New York City levies a local income tax, its city income tax applies only to residents and not commuters. In 2000, an appellate New York court unanimously ruled in Lary S. Wolf and Ellen S. Brody v. State of New York that a commuter tax was unconstitutional. The tax had become a point of contention the previous year in a tight special state Senate election in Rockland County, northwest of the city.

The length of the pandemic poses another variable that extends to transit ridership and the real-estate market, Gelinas added. “People aren’t going back to the office until there’s no mask mandate. People won’t go into an office if they still have to wear a mask.”

According to Sabino, the legal angles are many.

“Second, most likely the baseline for resolving the instant controversy will be the tried-and-true ‘minimum contacts’ test which the high court has evolved for well over a century, at least. Fundamentally, a state cannot tax you — or sue you or regulate you — unless you have something more substantial than some incidental de minimis relationship with that jurisdiction.”

A central question, according to Sabino, is whether work at home qualifies as a minimum contact sufficient to authorize the employer’s home state to impose a tax, or whether it falls below that minimum, leaving the employer’s state of residence “out in the cold” when it comes to taxing employee compensation.

The pandemic may have broadened the scope of the question. In California, for example, large tech firms have closed campuses and shifted to remote work for extended or indefinite periods, giving employees the chance to relocate anywhere in or out of the country.

According to Sabino, while a win by Massachusetts might seem to merely maintain the status quo, “it goes far beyond that.”

“Both employees and employers who think it unfair that they must pay tax to a state simply because they receive mail there might simply decide the heck with all of it, and relocate to where most of its workers reside or some other, tax-friendly jurisdiction,” he said.

“So a win by Massachusetts might prove to be a hollow one.”