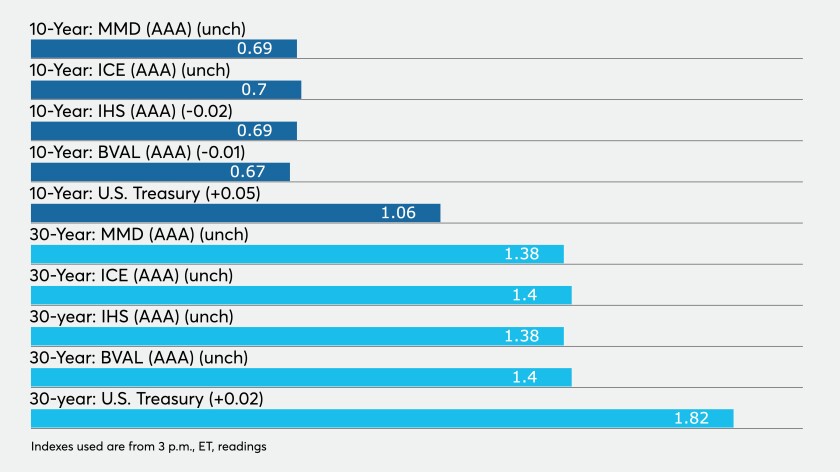 Municipal yields were steady across the curve as rising U.S. Treasury yields took some of the shine off of a two-day muni rally, but inflows continued to hit records with another multi-billion week.

This comes after the Investment Company Institute reported two weeks in a row of $3-plus billion inflows.

“While funds have a trackable metric, it is safe to assume that other investor categories are faced with more cash to put to work than tax-exempt bonds that are available,” noted Kim Olsan, senior vice president at FHN Financial, adding that upcoming deals via POS releases suggests several upcoming taxable issues totaling $2 billion.

Chicago Board of Education bonds were repriced to lower yields by as much as 37 basis points, showing just how far investors will go for any incremental yield.

Munis shrugged off the UST moves.

“We had a 1% on the 10-year, and then we saw a sell-off from there,” said a North Carolina trader. The benchmark, 10-year Treasury bond was at a 1.057% just before the close of trading. “We will see how we trade off of this over the next few days and whether this correction sell-off will gain some steam or not.”

There was little selling pressure to speak of, and few large new issues with “marquee” names and broad market interest priced Thursday.

Amid new issues, there is an ongoing willingness by underwriters to write lower coupons and an acceptance by investors of those coupons, the trader noted.

In the secondary market, meanwhile, there was decent two-way flow on Thursday, he said.

“Bids have tightened because there is little in the way of anything with decent yield,” he said, pointing to well-known, recognizable credits in the healthcare sector as an example.

The airport sector, according to the trader, is extremely “quiet.”

“Spread compression continues given the lack of paper around,” he added. “Folks are looking for anything with incremental yield.”

Gross domestic product in 2020 fell 3.5%, the first annual contraction since the financial crisis, after a 2.2% expansion in 2019.

In the fourth quarter of 2020, GDP rose 4.0%, according to the advance estimate, after a 33.4% rebound in the third quarter, which followed the 31.4% plunge in the second quarter. Economists polled by IFR Markets expected that gain.

The personal consumption expenditures price index rose 1.5% in the quarter, after a 3.7% gain in the third quarter, while the core PCE index, the Federal Reserve’s favored measure of inflation, was up 1.4%, after a 3.4% rise a month earlier.

“The coronavirus and related policies upended the economy, and despite trillions in aid, remains the largest threat to growth in 2021,” said Stifel Chief Economist Lindsey Piegza.

And while some believe the vaccination program will lead to further economic growth, she said, “the vaccination process appears more complicated than anticipated, falling short both in terms of timing and distributions, as well as new developing risks of additional variants of the disease, the economy may face a bumpier, longer pathway back to some semblance of normal.”

The report “marks a normalization after Q3’s historic +33.4% read, which was largely a bounce back from the Q2 COVID-induced lockdowns,” said George Boyan, president of Leumi Investment Services.

Business investment (up 13.8%) and residential investment (up 33.5%) were key drivers of growth, he said. “Consumption rose by just 2.5% as CARES Act funding has been largely utilized coupled with Congress’ delayed passage of additional stimulus,” he noted. “Auto sales slowed, but was offset by a 4.0% increase in service consumption.”

And while first quarter growth may not reach the same level as Q4, Boyan expects “a further bounce back in H2 as vaccination rates continue to climb and COVID restrictions continue to wane.”

But, the market considers the rise “really old news,” according to Duane McAllister and Lyle Fitterer, senior portfolio managers at Baird Advisors, with all eyes on 2021 growth.

“The stimulus that was passed in late 2020 combined with potentially further stimulus, combined with re-openings across the country will accelerate GDP growth as we move through the quarter and the year,” they said. “With the strong growth outlook in 2021, we expect that municipalities will benefit from an equally strong rise in tax revenues as well. This will boost the fundamental backdrop for municipal credit, supporting the impressive demand we have witnessed in recent months.”

“The slowdown in economic activity in December resulting from the intensification of the pandemic was milder than initially feared (and concentrated in certain services sectors), setting a solid starting point for activity in 2021,” said Roiana Reid, U.S. economist at Berenberg Capital Markets. “We expect economic growth to accelerate this year as vaccines become more widely distributed and pent-up demand is released.”

“The details of the report tell the story of a moderating recovery,” said Christian Scherrmann, U.S. Economist at DWS Group. “Consumption in particular disappointed in what is usually its strongest season.”

Economists expected 860,000 claims in the week.

The number of continuing claims fell to 4.771 million in the week ended Jan. 16 from 4.974 million the week before.

Also released Thursday, the Leading Economic Index rose 0.3% in December, in line with expectations, after a 0.7% gain in November, The Conference Board said.

The coincident index climbed 0.3% after 0.1% growth in November, while the lagging index added 0.1% after a 0.1% increase a month earlier.

“The U.S. LEI’s slowing pace of increase in December suggests that U.S. economic growth continues to moderate in the first quarter of 2021,” according to Ataman Ozyildirim, senior director of economic research at The Conference Board. “Improvements in the U.S. LEI were very broad-based among the leading indicators, except for rising initial claims for unemployment insurance and a mixed consumer outlook on business and economic conditions. While the resurgence of COVID-19 and weak labor markets remain barriers to growth, The Conference Board expects the economy to expand by at least 2.0% (annual rate) in Q1 and then gain momentum throughout the year.”

The housing sector has been a bright spot in the economy, thanks to ultralow mortgage rates.

Finally, manufacturing activity in the Kansas City region expanded at a faster pace in January than December.

“Regional factories reported more growth in January,” said Chad Wilkerson, vice president and economist at the Federal Reserve Bank of Kansas City. “COVID-19 vaccination is a key factor in manufacturers’ overall business outlook for 2021, but with less impact on hiring and capital spending in the near-term.”

New York City Sellers: Should You List This Summer?
Despite Slowdown In Housing Market, These 10 Cities Have Seen The Biggest Price Growth From 2021 To 2022
UK to suffer high inflation longer than other nations, warns Bailey
Texas Housing Market Report Halfway Through 2022
Summer temperatures — and inflation — are running hot. Here’s how to save money on cooling bills as prices rise