Robinhood, the online brokerage at the centre of wild trading in GameStop and other hot shares, scrambled to shore up its financial position and public reputation on Thursday after a day of chaos and anger among its clients.

The company has drawn down at least several hundred million dollars via a credit facility with banks led by JPMorgan and including Goldman Sachs, Morgan Stanley, Barclays and Wells Fargo, according to people familiar with the move.

The drawdown came after Robinhood and other retail brokers restricted trading earlier on Thursday in a number of companies whose share prices had risen sharply over the past week. After the cash injection, the company said it would allow trading in those securities to resume on a limited basis on Friday.

“We made a tough decision today to temporarily limit buying for certain securities,” it said in a statement. “As a brokerage firm, we have many financial requirements, including SEC net capital obligations and clearinghouse deposits. Some of these requirements fluctuate based on volatility in the markets and can be substantial in the current environment.”

Robinhood has proved a popular venue for day-traders who organise on Reddit message boards to buy shares such as GameStop, AMC and BlackBerry in the hope of inflicting losses on hedge funds who have placed bets against the same stocks.

The decision to curb trading resulted in a fierce backlash from users, a class-action lawsuit accusing Robinhood of market manipulation, and calls from politicians to investigate the company. It also sparked a host of online conspiracy theories.

In an attempt to limit the damage, Vlad Tenev, Robinhood’s co-founder, took to Twitter “to clarify a few things”, including its regulatory requirements.

“These requirements exist to protect investors and the markets and we take our responsibilities to comply with them seriously.”

In common with rivals like Schwab and ETrade, Robinhood clears trades at the main US clearing houses, run by the Depository Trust & Clearing Corporation for equities and the Office of the Comptroller of the Currency for options. A clearing house stands between two sides of a deal, managing the risk to the market if one side defaults.

While self-clearing saves on the fees that would otherwise go to another clearing broker, it also means Robinhood needs to have higher capital on hand, as it takes on to its own book the risk that an executed trade does not settle. The broker also faces higher costs if the clearing house raises margin requirements to protect its members against high market volatility.

News that Robinhood had tapped its credit facility was first reported by Bloomberg.

Robinhood’s statement that it would reverse some of the trading curbs sparked a sharp rebound in shares during after-hours trade in New York. GameStop rose more than 50 per cent after a drop of 44 per cent in regular hours. Shares in AMC and BlackBerry reversed half of their regular-hours losses.

“We’ll continue to monitor the situation and may make adjustments as needed,” Robinhood said.

“Robinhood is in a tough spot and it is a highly visible moment,” said Paul Deer, director of Advisory Service at Personal Capital, a digital wealth manager. “They have investors trading on margin and that represents a risk to them and the broker if we see prices reverse.” 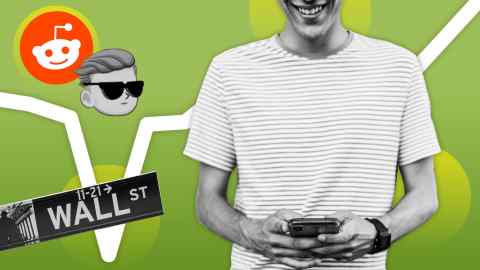 There were also statements after-hours on Thursday from market making groups, who process trades, and who had been targeted for criticism on social media over the curbs, including from Citadel Securities, the trading company owned by Ken Griffin, which pays Robinhood for orders.

Citadel Securities said it had “not instructed or otherwise caused any brokerage firm to stop, suspend, or limit trading or otherwise refuse to do business”.

Citadel, a hedge fund also owned by Mr Griffin, said it was “not involved in, or responsible for, any retail brokers’ decision to stop trading in any way”. Earlier in the week, Citadel provided rescue financing to Melvin Capital, a hedge fund targeted by retail traders on Reddit.

“We cannot control, however, the lightning-fast spread of information and misinformation that takes place on social media, and for that I am incredibly sorry to our customers and staff for this.”