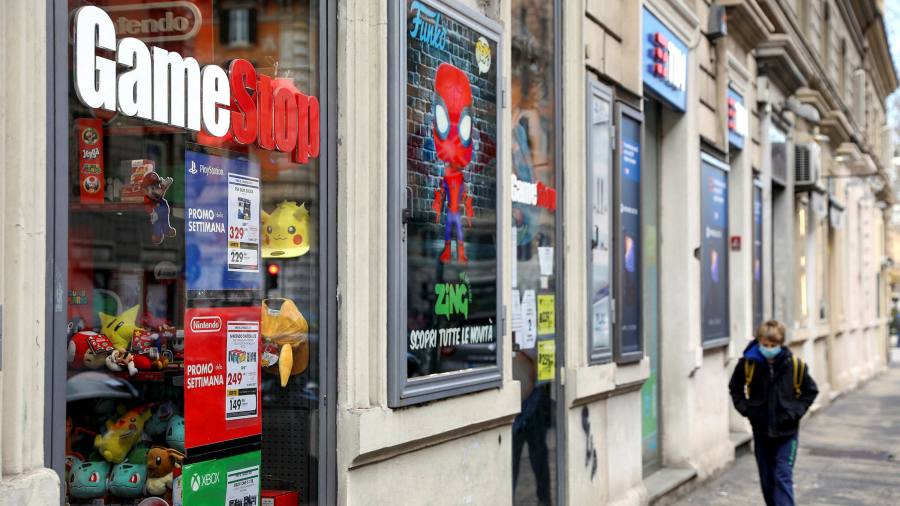 US regulators on Friday said they would review trading curbs imposed by Robinhood and other online brokerages and act on evidence of market manipulation, as GameStop and other targeted stocks resumed their Reddit-fuelled rally.

The statement from the Securities and Exchange Commission followed a move by Robinhood, the online broker used by a new army of day traders, to raise $1bn in convertible debt to shore up its finances. On Thursday, it had been forced to halt trading in some of its most-traded stocks.

The cash infusion allowed it to lift some of the curbs, prompting share prices to surge once again. GameStop, the video game retailer at the centre of the frenzy, was up 75 per cent by lunchtime in New York, recouping all Thursday’s losses, which were triggered by the trading limits. Year-to-date gains have topped 1,500 per cent.

GameStop is one of a handful of stocks targeted by users of Reddit message boards in the hope of inflicting losses on hedge funds that had bet heavily against the company. When brokerages curtailed trading on Thursday, users reacted with outrage and politicians demanded an investigation.

The SEC said it was working with other regulators and exchanges “to ensure that regulated entities uphold their obligations to protect investors and to identify and pursue potential wrongdoing”.

“The commission will closely review actions taken by regulated entities that may disadvantage investors or otherwise unduly inhibit their ability to trade certain securities,” it added.

The frenzied trading of the past week has fuelled concerns that a speculative bubble in equities could trigger a sharp market pullback, and the volatile trading conditions prompted several important market players to act to protect themselves. Online brokers increased margin requirements for customers — meaning they needed more money in their accounts to trade — and clearing houses made similar demands of the brokers themselves.

Clearing houses are central organisations that sit between different players and manage the risk to the market if one side defaults. The Depository Trust and Clearing Corporation raised the total margin it needed from the industry on Thursday from $26bn to $33.5bn, noting that outsized trading volumes in shares like GameStop and AMC “generated substantial risk exposures at firms that clear these trades . . . particularly if the clearing member or its clients are predominantly on one side of the market”.

Robinhood’s chief executive Vlad Tenev said it had wanted to increase the amount of cash it had to deposit with clearing houses.

The $1bn fundraising is in the form of debt that its investors can convert into equity. Ribbit Capital is leading the investment with Iconiq Capital, with the two firms together putting in more than $500m, the people said. Other existing investors are expected to commit the rest of the capital by the end of Friday, they said.

Day traders were celebrating claiming one scalp on Friday after Citron Research said it would stop publishing short selling analysis after two decades of pointing out overvalued companies. Andrew Left, founder of Citron, had been one of the most outspoken short-sellers of GameStop.

Meanwhile, American Airlines, whose shares have been pushed higher by day traders trying to squeeze out short-sellers, took advantage of being caught up in the frenzy. It raised $1.1bn by selling new shares to help cover losses from the pandemic-induced downturn in air travel.

The SEC said market infrastructure has proven resilient during this week’s huge trading volumes, but it warned “extreme stock price volatility has the potential to expose investors to rapid and severe losses and undermine market confidence”.

Tal Cohen, head of North American markets at Nasdaq, said the exchange is in “close dialogue” with the SEC and Financial Industry Regulatory Authority, the organisation that governs US broker-dealers, to piece together recent trading data.

“All investors, whether you’re a hedge fund or retail, have a right to invest and the right to express your opinions in the market. But it has to be done in a way that is not manipulated and is not harmful to the market,” said Mr Cohen. “I think what everybody’s trying to do is balance the desire to continue to democratise our markets and protect investors.”