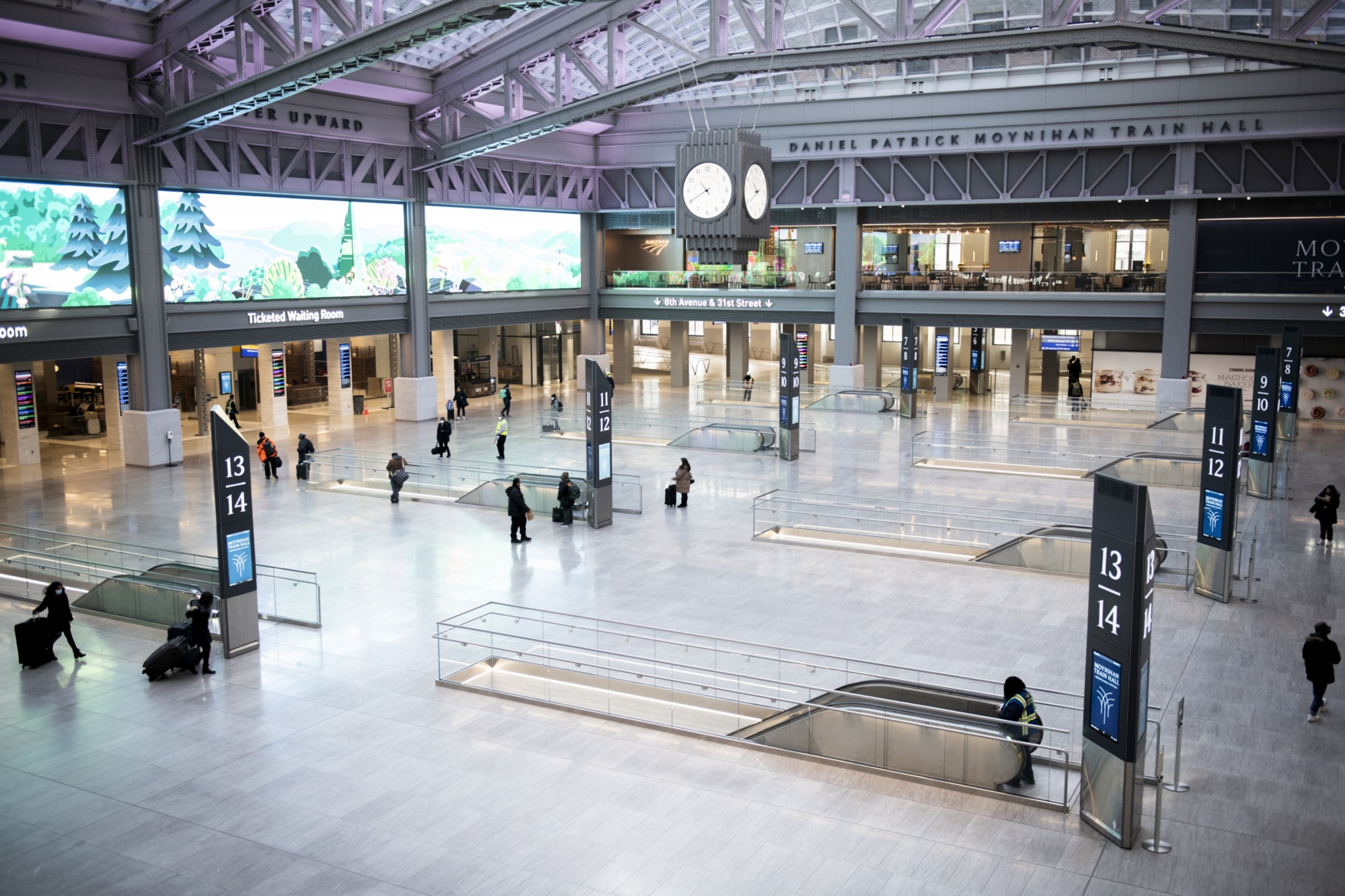 Bonds
The Moynihan Train Hall at Pennsylvania Station in New York opened on Jan. 1 for Amtrak and some Long Island Rail Road passengers.

The opening of the Moynihan Train Hall at Penn Station, a planned Port Authority Bus Terminal replacement eight blocks north, and other looming megaprojects have sparked a renewed optimism about New York transportation.

Even as COVID-19 lingers, transit officials and advocates envision these undertakings as springboards for the city’s revival.

Two new Gateway rail tunnels connecting New Jersey and New York, a signature Amtrak undertaking, stand to get a renewed push from the Biden administration and could prompt a multiplier effect.

Also in the pipeline are the extension of the Second Avenue subway line to Harlem; four new Metro-North railroad stations in East Harlem; the expansion of the High Line elevated pedestrian park along Manhattan’s West Side up to the Moynihan hall; and development along the Sunnyside rail yards in Queens.

“It has forced us all to stop for a moment and take a deep breath in many respects,” Slater said, citing loss of life, economic hardship and civil unrest. “For those of us in policy and government, this has been a time for reflection and recommitment as well.

“More specifically on the issue of transportation, I think that this system that has almost been shut down by the virus, clearly impacted and crippled by the virus, I think is going to come back in a way that is powerful, that is unprecedented in many ways, and that will reshape a city like New York and our country. And I think it’ll be for the good.”

They include deputy secretary Polly Trottenberg, a former New York City transportation commissioner who is no stranger to D.C. She was U.S. DOT undersecretary in the Obama administration.

“Polly Trottenberg is an extraordinary partner to Mayor Pete as he leads the department and I believe it’s good that she knows New York,” Slater said.

Trottenberg, a constant under Mayor Bill de Blasio from 2014 until late last fall, ran point on a series of initiatives including the Vision Zero pedestrian safety program and bike-lane expansion. She also pushed state officials to approve design-build procurement for the city across the board, considered a time- and money-saver.

“She had a much tougher job than Janette Sadik-Khan,” said Mitchell Moss, director of New York University’s Rudin School for Transportation Policy and Management. According to Moss, Trottenberg predecessor Sadik-Khan had a more supportive mayor on transportation matters in Michael Bloomberg.

“We already see the impact [COVID has] had on mass transit in terms of where one does business from. More and more people are doing business from home,” said Squire Patton Boggs senior policy advisor Joe Crowley, a Queens congressman from 1999 to 2019.

“There’s no question a lot of challenges lay ahead in terms of mass transit. Will people be going back to work the way they once did? The mass transit system was once the pride of New York City and at the same time we’ve seen the vulnerability that it has been under since COVID-19, the need to shut down between 1 and 5 in the morning.

“The future is yet to be determined in terms of what will happen,” Crowley said. “I do think that once we’re past the COVID-19 test, I think we’ll see a restoration, a launch of what New York was prior to that, but not without some significant changes.”

New York must sell the region’s importance to the national economy, said Brooklyn-born Senate Majority Leader Charles Schumer. “If New York goes down, we’re 10% of the [gross domestic product]. The rest of the country doesn’t do so well,” he told regional transit advocates during an online forum.

The Moynihan hall, which connects to Penn Station on 8th Avenue in the historic James A. Farley Post Office Building, opened Jan. 1. Named after its champion, the late U.S. Senator, Daniel Patrick Moynihan, the project finally took hold after years of political tussling and inertia.

Trottenberg was a transportation policy advisor to Moynihan and later, Schumer.

“Sen. Moynihan once told me that this kind of work is not for the short-winded,” she said at a Regional Plan Association online ceremony, where think tank RPA named the Moynihan hall its project of the year and honored Trottenberg with its “Making It Happen” award.

The original Pennsylvania Station, a fondly remembered piece of Beaux-Art architecture designed to echo ancient Roman public spaces, was demolished in the 1960s during the construction of Madison Square Garden, leaving intercity and commuter train riders to access the platforms through the arena’s cramped basement.

The new train hall was built in the long-vacant James A. Farley Post Office Building next door, originally a hub to sort mail that in the past was transported on the trains running downstairs.

Moynihan, which serves Amtrak and Long Island Rail Road riders, provides breathing room for riders long cramped in the current, dingy Penn Station. Only the flow of people is different; nothing has changed about the track layout or narrow platforms underneath the new hall.

“The good thing is that it illustrates that the governor realizes that we have to approach transportation from an amenity perspective and not just a utilitarian perspective,” said Nicole Gelinas, a senior fellow with the Manhattan Institute for Policy Research. “You’re not going to jam people into a crowded train just for the privilege of working in Manhattan.”

Gelinas said the $1.6 billion price tag, “essentially to recreate a ceiling,” reflects the high construction costs in the city.

Architecture firm McKim, Mead and White designed it as a sister to its signature original station.

“It’s an uptick for New York City in that I don’t think an important train stop on the northeast corridor was well represented by being in the basement of Madison Square Garden. So for that alone, I think it’s a positive,” said Samuel Turvey, chairman of transportation infrastructure nonprofit ReThinkNYC.

“Adaptive reuse of historic buildings is really something we really should be looking to do wherever we can. We don’t just want to be mistaken for Houston, Dubai or Los Angeles.”

According to ReThinkNYC feasibility analyst Karim Ahmed, the improved “vertical circulation” from platforms should enhance speed and safety. “Get everyone off the trains so that a new set of trains can come in,” he said.

“The Moynihan Train Hall should not be the high-water mark for new transit facilities. Rather it should be a new water mark and point of comparison for proposed facilities which should all aspire to enliven all people passing through.”

“We think in doing that you could hyperventilate or create transit hubs,” Turvey said. “Secaucus could certainly do more. Sunnyside in Long Island City could have a transit hub. There’s potential for Port Morris in the Bronx. You also could use existing decommissioned rail lines to really improve the transit experience throughout the region.

“It will hopefully decompress the pressure on the Port Authority or Penn Station or even Grand Central. I think we’ve overconcentrated those areas to the areas to the point where there are serious inefficiencies.”

The tribalism synonymous with metropolitan-area transit poses a large barrier, as do moving parts that include multiple proposals for a relocated Madison Square Garden.

“It will take some doing to break state jurisdictional lines, authority boundaries, things like that,” Turvey said. “There are a lot of tribes, but we will keep at it.”