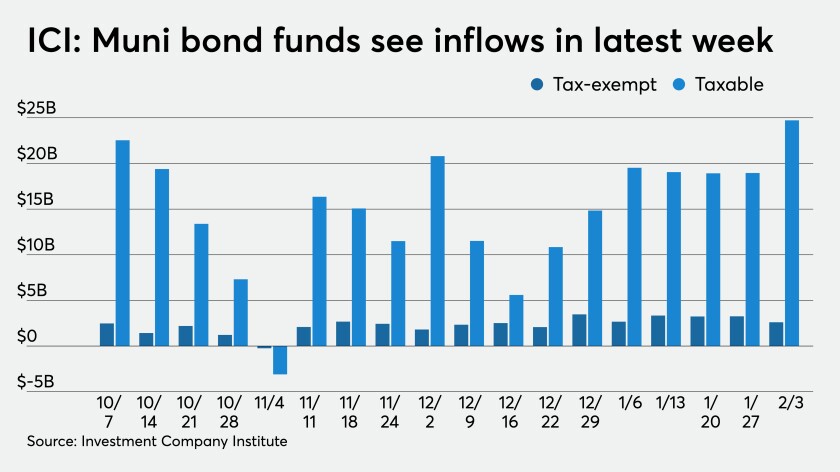 The municipal market did not blink and yields grinded lower with benchmark curves falling one to two basis points as investors tore through new issues.

Flows continue to pour into municipal bond mutual funds. The Investment Company Institute reported long-term muni funds alone had an inflow of $2.607 billion in the latest reporting week, reaching a total of $15.5 billion year-to-date and 13 weeks in a row of inflows.

Powell: Labor market has ‘very far’ to go
Monetary policy alone will not be sufficient to achieve maximum employment, Federal Reserve Board Chair Jerome Powell told the Economic Club of New York in a webcast Wednesday.

“Given the number of people who have lost their jobs and the likelihood that some will struggle to find work in the post-pandemic economy, achieving and sustaining maximum employment will require more than supportive monetary policy,” he said. “It will require a society-wide commitment, with contributions from across government and the private sector.”

And although the economy has made significant strides, “we are still very far from a strong labor market,” with almost 10 million fewer people employed this January compared to February 2020, Powell said, noting it was “a greater shortfall than the worst of the Great Recession’s aftermath.”

The number of unemployed people may be even higher, since labor force participation rates have dropped the most in a year since 1948. “Fear of the virus and the disappearance of employment opportunities in the sectors most affected by it, such as restaurants, hotels, and entertainment venues, have led many to withdraw from the workforce,” he said. “At the same time, virtual schooling has forced many parents to leave the work force to provide all-day care for their children. All told, nearly 5 million people say the pandemic prevented them from looking for work in January.”

In a question-and-answer session, Powell said the Fed would wait to see real inflation rise before taking action, noting in the past decade although the Fed expected inflation to reach it’s 2% target, it never did on a sustained basis.

While he expects an increase in inflation during the spring months, he said, “it won’t mean very much” since it “won’t be very large or persistent.”

Although “inflation dynamics will evolve over time,” Powell said, he doesn’t expect a sudden change, but the Fed will react if one occurs.

The national debt will not play a role in monetary policy, he added, noting the deficit will need to be addressed when the economy is healthy.

The latest round of infections led to another 500,000-plus job losses in leisure and hospitality in December and 61,000 more in January, Powell noted. “Extended periods of unemployment can inflict persistent damage on lives and livelihoods while also eroding the productive capacity of the economy. And we know from the previous expansion that it can take many years to reverse the damage.”

Those out of work will need support, Powell said. He hailed the Paycheck Protection Program and its extension.

The lower longer-run economy growth rate and a low neutral rate of interest mean monetary policy “will be constrained more often by the effective lower bound. That circumstance can lead to worse economic outcomes — particularly for the most economically vulnerable Americans.”

Economic indicators
The core consumer price index was lower than expected, despite the headline number being on target.

CPI rose 0.3% in January after a 0.2% gain in December, while the core rate was flat both months.

Economists polled by IFR Markets expected the headline number to increase 0.3% and the core to climb 0.2%.

Year-over-year CPI and core each grew 1.4%, on par with economists’ projections.

“While the headline figure catches the eye, the Federal Reserve will be far more concerned with what is causing any spike in inflation and how permanent it is,” noted Craig Erlam, senior market analyst, OANDA Europe. “It will be hesitant to react in a knee-jerk manner at a time when the economy needs all of the support it can get and the tweaks to its mandate will allow for that, as long as the desire to do so remains on the policy committee.”

Inflation may “test the Fed’s nerve this year,” he said, leading to concern about a taper tantrum.

Components of the report were termed “mixed” by Morgan Stanley researchers led by Ellen Zentner. “Closely watched rent and owners’ equivalent rent measures both increased at a steady rate – rent +0.11%M, in line with its December increase, and OER +0.14%, also in line with its December increase,” they wrote in a note. “We have penciled in a roughly stable trajectory for rents and OER through most of the first half this year into our forecast, and the data continues to show, in our view, a bottoming of the trend in these components.”

While prices of goods have rebounded, “core services inflation remains depressed,” said Roiana Reid, U.S. economist at Berenberg Capital Markets. “Its flat reading for the second consecutive month in January lowered its year-over-year change to 1.3% from 1.6%, a 10-year low.”

She added, “Headline inflation will not accelerate until services inflation does.”

Most economists expect a spike in inflation in the spring, and Berenberg says the headline number year-over-year could top 3% at times since prices fell in March, April and May last year, although gains in the second half could prove more sustained.

“As economic activity returns to normal, pent-up demand for services – particularly the leisure and hospitality, accommodation and recreational services sectors – will contribute to price pressures,” Reid said. “The persistent U.S. dollar weakness will continue to lift the prices of nonpetroleum imports and domestic goods. Inflation expectations will influence whether any acceleration in realized inflation is actually sustained.”

With the economy unable to fully reopen, inflation is “tepid,” said Diane Swonk, chief economist at Grant Thornton. “Sadly, the weakness in inflation tends to be in areas that most cannot benefit from, as they include airfares and hotels.”

Separately, wholesale inventories gained 0.3% in December after a flat November, while sales jumped 1.2%, following a 0.3% increase a month before. Year-over-year inventories are down 1.6% while sales are 1.7% higher than year-ago totals.

BlackRock expects heightened demand for munis
While new supply underwhelmed in January, as issuers took a wait-and-see approach on the new administration, in the tax-exempt space reinvestment of income from maturities, calls and coupons outstripped issuance by nearly $16 billion, “creating a powerful tailwind,” according to a monthly report from Peter Hayes, head of BlackRock’s Municipal Bonds Group, James Schwartz, head of its Municipal Credit Research and Sean Carney, head of its Municipal Strategy. They noted new issues were oversubscribed by 11 times on average.

The month of February has produced positive total returns in eight of the past 10 years, BlackRock said.

“While rich valuations will cause a drag, we expect strong demand to continue outpacing an elevated but manageable level of issuance,” the authors wrote. “We believe fundamentals will likely benefit from additional fiscal aid, and vaccine distribution should support longer-term revenue normalization. As the new administration lays out its agenda and tax policy comes into focus, we anticipate heightened demand for tax-advantaged assets such as muni bonds.”

Fiscal and credit stress is not deterring the voracious appetite or quest for yield in the municipal market, according to a February report from DWS Group.

Investors continue to devour low-quality bonds in the search for yield among new issues — many of which are oversubscribed, according to the report by the DWS municipal bond team, headed by Ashton Goodfield.

On the state level, challenges will be offset by opportunities.

“DWS anticipates financial stress to continue for states, but the promise of additional unrestricted aid makes the path forward much less challenging,” the report said.

States struggling before the pandemic, such as New Jersey, Illinois, Kentucky, Pennsylvania and Connecticut, are facing a lasting problem that will persist after the disease has receded, the analysts noted.

Credit concerns are present due to the delayed distribution of the COVID vaccine, the group added.

“DWS anticipates that the fiscal stress many municipal issuers are feeling will not abate and may actually worsen as the surge continues into the first quarter,” according to the report. “The degree and timing of additional federal aid will likely dictate whether the rating agencies continue to take negative rating actions.”

However there is optimism. “Opportunities still exist in purchasing municipal credit as the recovery will be meaningful and sustainable,” the team wrote.

A “powerful” factor in municipal credit fundamentals and supply going forward is restoring the ability to use tax-exempt bonds to advance refund high cost debt, the report said.

“Issuers would have the capacity to refinance debt at lower interest rates compared to the rates they currently pay with taxable advance refunding,” the report said.

ICI said the total combined estimated inflows from all long-term bond funds and ETFs were $27.935 billion after an inflow of $23.116 billion in the previous week.