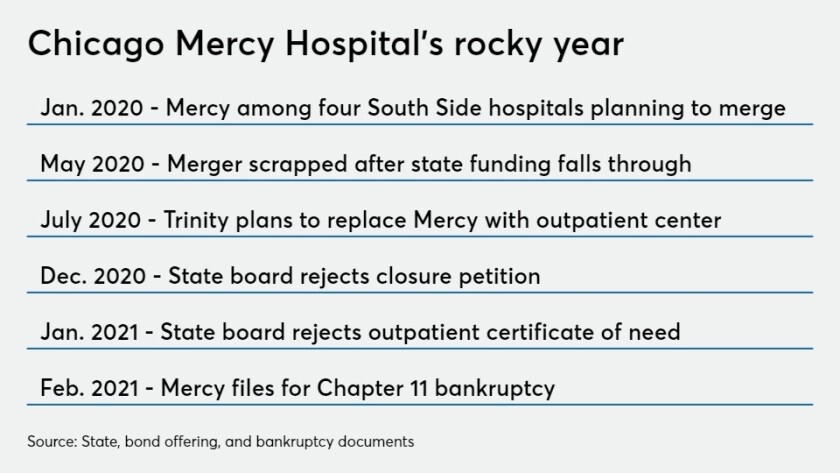 Michigan-based Trinity Health’s efforts to shed a fiscally struggling Chicago hospital resulted in a Chapter 11 filing for the hospital Wednesday.

Mercy Hospital and Medical Center and Mercy Health System, which became part of the national system nearly a decade ago operating as a “health ministry” under the system, filed for bankruptcy after its efforts to wind down operations were stymied by a state board that has a say on hospital openings, expansions, and closures.

Trinity will record restructuring charges estimated between $90 million to $115 million but doesn’t expect any other material impact. It says its more than $8 billion of bond debt will be unaffected.

The hospital is seeking to wind down operations as an acute care hospital but would maintain basic emergency services and some other services while it awaits the opening of a care center later this year, according to the filing in the U.S. Bankruptcy Court for the Northern District of Illinois, Eastern Division.

The state’s Health Facilities and Services Review Board rejected the application for the new $13 million care center late in January. Mercy has appealed.

A Trinity board resolution included in bankruptcy documents notes that the system “has attempted to effectuate its contemplated clinical transformation plan but has been unable to do so as originally envisioned and management does not anticipate being able to do so in the future.”

“Between 80% and 90% of the population served by Mercy are economically challenged, underserved, underprivileged, and uninsured,” in the hospital’s own words.

The massive hospital chain has been trying to extricate itself from the hospital for years.

“There have been many steps that preceded the difficult decision to file for Chapter 11,” Trinity said in a disclosure notice posted on the Municipal Securities Rulemaking Board’s EMMA website. “Losses incurred at Mercy for the first six months of the fiscal year 2021 totaled $30.2 million and averaged $5 million per month.”

The facility also has capital needs.

The hospital lost $303 million over the last seven years, according to Trinity’s January bond offering statement. The hospital recorded a $36.4 million loss for fiscal 2019 but ended fiscal 2020 with a positive position of $4.1 million due to an infusion of federal CARES Act aid.

Mercy is not a “Designated Affiliate” or a part of the Trinity Health Credit Group under the Trinity master trust indenture, Trinity said in the disclosure.

“Trinity Health’s management believes, based on available information, that the ultimate outcome of matters discussed herein, will not have a material adverse effect on the financial condition of Trinity Health or the Trinity Health Credit Group,” the disclosure says.

Trinity, headquartered in Livonia, Michigan, is one of the largest U.S. non-profit systems, owning or managing 92 hospitals in 22 states with total operating revenues of $18.8 billion for fiscal 2020. It carries double-A level bond ratings.

Trinity laid the ground work to close Mercy – located just south of Chicago’s downtown — last summer after its search for a buyer failed. The hospital was to be part of a four-hospital merger proposed early last year that included two independent hospitals and one owned by Advocate Aurora Health.

It called for $1.1 billion of capital spending to upgrade facilities with the expectation that a new facility would eventually be built. The area suffers from high incidences of chronic illness and lower life expectancy. The proposal was called off after the state said it couldn’t afford to help subsidize the plan as the COVID-19 pandemic battered its finances.

Mercy and Trinity say the wind-down of operations is a safety issue.

“The quality of care at Mercy is an increasing concern as physicians and other colleagues have left Mercy and operating losses have accelerated to $7 million per month,” bankruptcy documents read.

When founded by the Sisters of Mercy in 1852 in a rooming house, Mercy became the city’s first chartered hospital. When Trinity acquired the hospital in 2012 it was junk-rated after to years of losses but it had begun to see a fiscal turnaround as the neighborhood around it drew development. Trinity pledged to invest $150 million in capital.

Rating agencies affirmed Trinity ahead of its $300 million taxable sale in January, saying they expected the system’s operating margins to recover in a post-COVID-19 era.

“Through the next fiscal year Trinity Health’s financial performance should continue to stabilize, assuming no further significant impairment attributed to the coronavirus,” Fitch Ratings wrote. It rates $6.6 billion of debt.