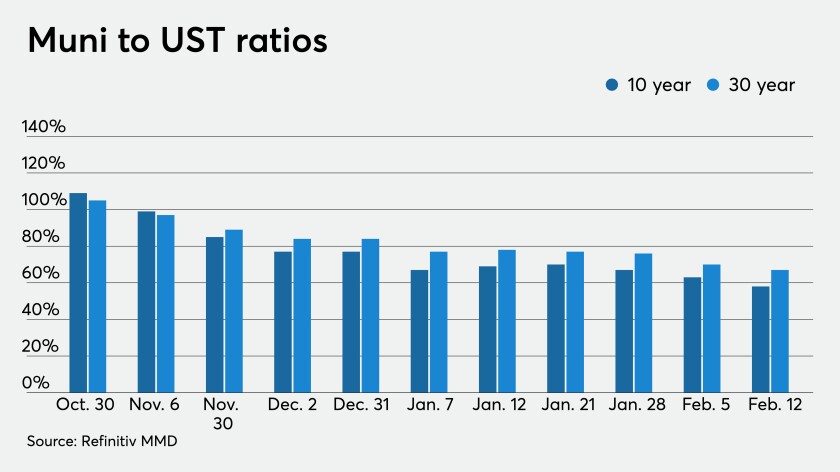 Municipals ended the week steady in quiet trading ahead of the Presidents Day weekend, even as U.S. 30-year Treasuries broke past 2.00%.

Investors will see a light $5.67 billion of new issues next week, led by the Regional Transportation District of Colorado’s tax-exempt and taxable green bond deal.

The continued inflows into municipal bond mutual funds are noteworthy, but lower-rated credits are where the flows show the hunt for yield is strong in this near-record low-rate environment. Refinitiv Lipper reported high-yield muni bond funds saw higher inflows of $832 million, compared with inflows of $610 million last week.

“This is extraordinary when the recent history of these funds is analyzed,” according to Dan Berger, senior market strategist at Refinitiv MMD. “During the past five weeks there has been average inflows of $763.4 million for high-yield muni funds.” That figure surpasses by more than $500 million the $277.8 million weekly average from Aug. 26, 2020, to current.

Spread compression across the market has been substantial but especially in high-yield. Part of the reason is extraordinarily low rates caused by the dearth of new paper.

“The market really won’t be challenged until there is meaningful supply,” Berger said, adding that a major credit event would also move rates higher, but that does not seem likely in the near term.

“Credit events could be greatly outweighed by political considerations. If you look at the New York MTA, when they came in the fall, they were +232 basis points above triple-As. Last week they were trading at 100-plus and then their deal got done at plus-86. Dare I say they could move to 70-plus,” Berger said. Prior to the pandemic, the MTA was trading at plus-34 to 40, he noted, but the fall from 232 is notable.

Investors will have to wait for that supply.

Fed will need to adjust as the economy improves
The COVID-19 pandemic threw the economy into disarray, creating uncertainty in so many areas, and economists still don’t agree on the future of inflation.

“Key aspects of the current U.S. macro situation are seemingly inconsistent or unsustainable,” said Mickey Levy, Berenberg Capital Markets Chief Economist for the U.S. Americas and Asia. “The current thrust of monetary policy, highlighted by the Federal Reserve’s zero percent interest rate and massive purchases of Treasuries and mortgage-backed securities (MBS), is inconsistent with the Fed’s longer-run objectives and unsustainable.”

While the yield on 10-year Treasuries is up, it “remains below inflation and inflationary expectations, which seems inconsistent with an economy that will eventually recover back to normal.”

Although inflation is currently “fairly subdued,” most experts expect inflation to begin to rise as the recovery progresses.

Fiscal and monetary stimulus will eventually lead to increased aggregate demand, which could result in higher prices. “The critical issue for sustained inflation is the extent to which these higher operating costs are passed onto consumers at the retail, wholesale, and manufacturing levels,” Levy wrote in a note. “This depends on aggregate demand. If economic activity accelerates as we forecast, with 15% cumulative growth in nominal GDP in 2021-2012, businesses will have flexibility to raise product prices. This will allow businesses to generally maintain their profit margins, but it will be reflected in higher inflation.”

But the Fed may watch inflation expectations, whose rise would mean higher bond yields. “As actual inflation drifted lower the last decade despite persistent declines in the unemployment rate, the Fed acknowledged that the Phillips Curve was flatter than it had previously thought, and placed more emphasis on the role of inflationary expectations in the inflation process,” he added.

It makes sense that the Fed would have a “sanguine outlook on inflation,” given the experience of the past decade, but “the history of inflation during periods of high deficits and easy monetary policy tells a different story,” Levy said.

“The timing and magnitude of the rise in bond yields is uncertain, and history suggests that any rise is unlikely to be smooth and gradual,” Levy noted. “Moreover, contrary to the perception of many market participants, the Fed is limited in its ability to control bond yields for more than a short period.”

Expect the Fed to adjust forecasts in upcoming Summaries of Economic Projections and more Federal Open Market Committee members (“close to a majority,” Levy said) to predict a fed funds rate hike in 2023.

“Actual growth has persistently exceeded the Fed’s recent SEPs, while the unemployment rate has fallen by much more, and the Fed’s new forecast will reflect the additional fiscal stimulus enacted in December, and the likely possibility of more under the Biden administration,” he said. “We note that our forecast of real GDP is far above the most optimistic forecast in the full range of FOMC members.”

A Fed announcement of a taper could come by early fall, with purchases of securities slowing early next year, Levy said, “but even before then, certain signals will suggest that the Fed is moving in that direction.”

After enough vaccines are administered, the economy will strengthen, labor markets will rebound and GDP will rise above pre-pandemic levels, he said, and the Fed’s “tone will change.”

Jeff Klingelhofer, co-head of investments and portfolio manager at Thornburg Investment Management, said, “the market is over-estimating the probability of higher prices.” While “inflation is coming,” it won’t be as soon as the market believes.

“The risk is there: we have a ton of money in the system and thus the potential risk to inflation moving higher is elevated.”

Consumer confidence, he said, “is severely depressed” despite the latest and perhaps future stimulus.

The debate about the post-COVID world rages, Klingelhofer said, “I for one don’t think companies go on massive hiring binges when we open up,” although it may be true in certain “depressed industries.”

With former Fed Chair Janet Yellen now heading the Treasury Department, he said, it will be interesting to watch the dynamics. Low rates have helped the asset markets and “ could be the cause of inequality, ” Klingelhofer added. “This conclusion could force the Fed’s hand to raising rates — an enormous unknown, but we must remember the Fed has a third mandate and legal charter from Congress to achieve ‘moderate long-term interest rates.’”

The Fed’s change to average inflation targeting poses the real question, said Jason Brady, President and CEO at Thornburg. “The Fed cares much less about market volatility than full employment — particularly when volatility is exhibited to the upside.”

He said the market may be overestimating how long rates will stay low, and “the move to a more normalized economy will be painful.”

In the only economic indicator release Friday, the University of Michigan’s consumer sentiment index declined as respondents lowered their expectations as vaccine rollout hasn’t been as quick as expected.

The headline index dropped to 76.2 in the preliminary February read from the 79.0 in January’s final print. The current conditions index slipped to 76.2 from 79.0 and expectations fell to 69.8 from 74.0.