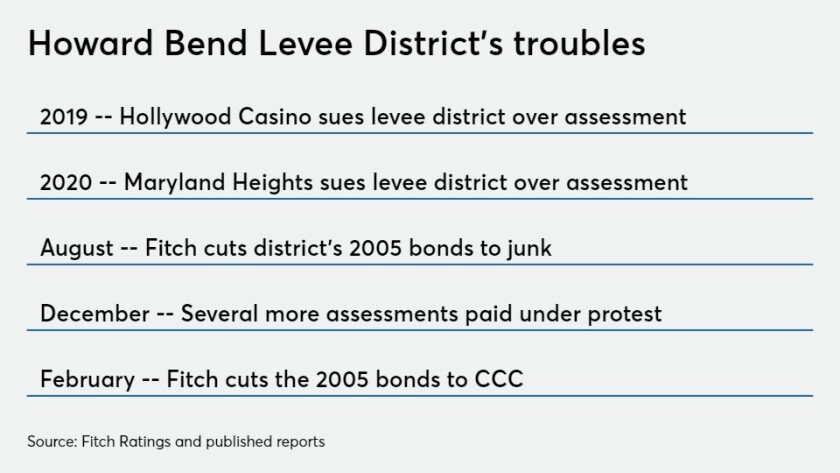 Rising default risks because of a Missouri levee district’s legal battle with some of its top taxpayers and the possibility of more challenges drove Fitch Ratings to sink its already low rating to CCC.

It had stripped the district of its investment grade rating in the summer, lowering it four notches to B-plus from BBB-minus.

After the new cut, Fitch removed the district from a rating watch negative placement. Fitch has rated the bonds as high as A-minus.. The district has other debt from separate issues not impacted by the Fitch action.

The suburban St. Louis district repays its debt from special levee assessments on properties that benefit from the 7.6 mile levee designed to protect from Missouri River flooding, or an “assessed benefit” ratio. It is required to set the assessment annually at a level that can meet debt service and under an emergency authorization the district can raise it to provide 1.1 times coverage.

The district faces lawsuits from major assessment payers on the 2005 bonds, including the largest ratepayer, Hollywood Casino. With those payments in limbo the district raised assessments on other members by up to 64% last year.

“Failure to resolve the litigation and the addition of new payment challenges by SLA payers make the timing and amount of assessment revenue receipt uncertain” increasing risks that the district can raise sufficient revenue for timely payment of debt service, Fitch warned.

The district had long benefited from predictable revenue collections that drove its original investment grade rating. It weakened in 2019 when the collection rate dropped as protested payments were withhold due to litigation filed.

“Collections for 2020 will reflect the continued holdback of assessment payments,” Fitch said.

The district’s top ten payers account for 80% of the assessed benefits with the owner of the Hollywood Casino St. Louis Properties, GLP Capital LP, responsible for 31%. The casino and the city of Maryland Heights, which accounts for 4% of the assessed benefits, sued the district over its procedures for calculating assessments and questions over its spending and use of assessment revenues.

Both made their assessment payments under protest for 2019 so they are being held by St. Louis County and won’t be distributed until the litigation is resolved.

The district covered 2020 debt service with reserves from excess past revenues and did not dip into a $2 million debt service reserve.

The district assumed the casino and city payments would remain in limbo due to the ongoing litigation so it increased assessments on payers by up to about 64% last year to meet 2021 debt service requirements. District assessment levels also assume some use of proceeds from the 2020 sale of land to the U.S. Fish and Wildlife Service.

The district has available funds from distributions, the land sale, and other funds to meet the $2.4 million March 1 debt service payment but the steep assessment hike prompted several others to make their assessment payments “under protest” adding $477,000 to the $1 million in casino and Maryland Heights’ payments being held back by the county.

Assessment payments made under protest are held back by the county initially, but typically released by May following a court action that is initiated annually on behalf of all county taxing entities, including levee districts, Fitch said.

“However, if any of the payers file a lawsuit related to their protested payments within 90 days of their payment, the protested payments would be held back pending resolution of the lawsuit or order by the county circuit court per state taxation and revenue statutes,” Fitch said. About $65,000 in 2020 debt service assessment payments are also delinquent.

Depending on the release of protested payments which will depend on whether new lawsuits are filed, the district is at risk of falling short of available revenues to cover the $554,000 Sept. 1 debt service payment, Fitch said.

If assessment revenues fall short, the district could dip into the $2 million debt service reserve or $400,000 maintenance fund account. The district also has about $643,000 in a bond installment fund, about $138,000 in emergency reserve and construction fund excess balances.

Maximum annual debt service on the Fitch-rated bonds is about $2 million and MADS on all district debt, payable from the same assessment base, is approximately $3 million, Fitch said.

The district was established in 1987 for a 100-year period to protect and reclaim land from the effects of overflow, wash and bank erosion, and for sanitary and agricultural purposes. It covers 13 square miles and primarily conducts improvement projects and levee maintenance.