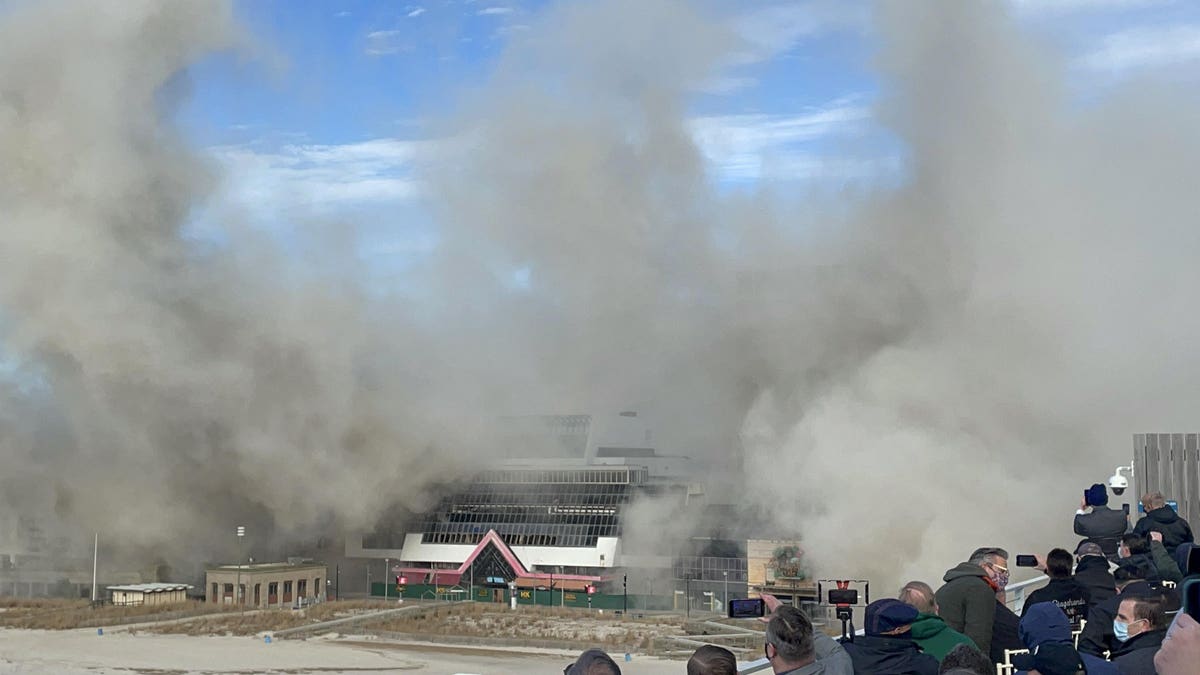 With a Bang: The beginning of the end of Trump Plaza in Atlantic City.Will Yakowicz

A few minutes after 9 a.m. on a bitterly cold Tuesday morning on the Boardwalk in Atlantic City, New Jersey, a horn sounded, and a flock of seagulls perched on the former Trump Plaza Hotel and Casino flew away in formation.

A series of booms reverberated from each floor as 3,800 sticks of dynamite exploded and in 19.5 seconds, the 34-story building was on the ground. A cloud of dust thrust towards the Atlantic Ocean and just like that, the last building former President Donald Trump built in the casino town by the sea came down and his complicated four-decade legacy in Atlantic City was over.

Moments before the implosion, Gina Wislack, a retiree who has lived in Atlantic City for nearly 30 years, was sitting at a table in One Atlantic, a venue across the Boardwalk from Trump Plaza, taking in the last few moments the tower still stood tall.

“I wish he was in there,” says Wislack, who bought the front row seats for $500 through an auction held to benefit the city’s local Boys and Girls Club. “He screwed a lot of small businesses here in Atlantic City. Fuck him. That’s why we’re all here.”

The Trump Plaza Hotel and Casino was the first of three casinos Donald Trump owned in New Jersey—all of which eventually filed for bankruptcy protection multiple times and went belly up. Trump’s legacy in Atlantic City has long been defined by self-dealing, financial trouble, and avoiding paying small, mom-and-pop contractors.

The timing of the implosion could not have been more symbolic. With the second impeachment trial completed, hundreds flocked to Atlantic City to bask in the collective schadenfreude and celebrate the end of Trump’s presidency. Nearby hotels such as Caesars jacked up their mid-week prices to take advantage of the surge in visitors coming to the gaming town, which was struggling long before its hospitality business was hit hard by the Covid-19 pandemic.

Minutes after the tower fell, Mayor Marty Small, who made bringing down Trump Plaza one of his promises during his first State of the City address in January 2020, spoke to the press huddled around him.

“As we say, on and on and on: Today is truly a great day in the great city of Atlantic City,” Small proclaimed. “…I still have chills.”

For the city, today was personal. “Trump stiffed many people and he made a mockery of Atlantic City,” Small said during an interview last week.

Chris Bilella, who came from Long Island to watch the implosion, said the symbolism and timing was a big reason he was here. “It’s a good end to the Trump presidency,” Bilella says. “Good riddance, out with the rubbish.”

In 1984, Donald Trump opened the Trump Plaza, which at the time was a joint operation with Harrah’s running the casino. To fund his vision of opulence in Atlantic City, which eventually included the Taj Mahal, which opened in 1990 and the Trump Marina, which was first dubbed Trump Castle and opened in 1985, Trump raised $675 million in bonds.

By 1990, the Trump Organization had amassed $3.4 billion in debt, straining the entire company. As Forbes’ senior editor Dan Alexander writes in his book about Trump, White House, Inc., one New Jersey regulator said at the time that the would-be president’s business was in a precarious position. “The possibility of a complete financial collapse of the Trump Organization is not out of the question.”

That same year, Fred, Trump’s father, sent a lawyer to the Taj in Atlantic City to purchase $3.5 million in chips. This money wasn’t going to be gambled at the tables—it went to Donald Trump so he could pay interest payments on a loan.

Trump took Trump Plaza public on the New York Stock Exchange in 1995 and by 2004, through a series of maneuvers and self-dealing, he had made more than $200 million while the company, which came to own his Taj Mahal and the Trump Marina, lost $647 million and declared bankruptcy. He resigned from the company in 2009, and Carl Icahn, who was a bondholder, bought the company out of bankruptcy in 2016. (The Taj Mahal closed in 2016 year and is now a Hard Rock Casino; Trump Marina is now the Golden Nugget.)

Dan Heneghan, who covered the opening of every casino in Atlantic City while he worked as a reporter for the Press of Atlantic City, says Trump came bringing a lot of jobs and hope to the Boardwalk. “He started off with a lot of good will,” Heneghan says. “But he eventually squandered all of it.”

Yet, the Trump Era also coincided with the best of times for Atlantic City. Trump Plaza was ideally located at the end of Atlantic City Expressway—in the middle of the Boardwalk—making it an instant entertainment hub and destination.

It hosted fellow billionaire Vince McMahon’s Wrestlemania IV and V and dozens of boxing matches, including Mike Tyson’s famous 1988 bout against Michael Spinks, whom he knocked out in one minute and nine seconds.

Of course, not everyone attending the implosion was there to bask in the bad will. Mike Lopez, a longtime Atlantic City resident who hosts an AM radio show, says in some ways, he misses the Trump Era.

“I loved the Plaza, I spent nearly 300 nights there in my twenties and thirties,” says Lopez from a table at One Atlantic facing the tower, protected by 22-foot thick glass windows.

On fight nights, he recalls, the city had a magic aura. Limousines lined the streets and actors, pop stars, and titans of industry could be seen enjoying events. Lopez says he met Bruce Willis one night, and remembers the thrill of seeing Michael Jackson behind an army of security guards.

“It was crazy—every fight night the whole city was electric,” says Lopez.

Others just came to have a blast while watching the implosion. Louis Woloszyn, dressed in an orange jump suit with fake explosives and a clock strapped to his chest, arrived at Atlantic City as his alter ego, “Implosion Man.”

A Philadelphia resident, Woloszyn started going to controlled implosions in 1994, when he saw the Sears Catalogue building come down in Philly. The last time he was in Atlantic City was in 2008, for the Sands implosion. “It started as a bad Halloween costume,” Woloszyn says. “Now I’m a legend in my own mind.”

“The day went exactly as planned,” says Mark Loizeaux, president Controlled Demolition, Inc., the company that brought the tower down to earth today. A few hours after the implosion, Loizeaux is standing on the corner of Pacific and Missouri Avenues, wearing a white hard hat and covered in a layer of dust. “We don’t blow structures up,” he explains. “We use a small quantity of explosives… and gravity has her way.”

Loizeaux, whose father started the business in 1947, has felled many buildings in Atlantic City: the Traymore Hotel in 1972, the Marlborough-Blenheim Hotel in 1979, the King David Hotel in 1998 and the Sands Hotel in 2008. His resume also includes the Hacienda Hotel, Sheldon Adelson’s Sands Hotel, the Landmark and the Dunes in Las Vegas. He doesn’t understand the hoopla over the fact that Trump used to own the Plaza tower. He prefers to look forward. To Loizeaux, he sees his services as a way to help the city usher in a “rebirth” of an outmoded and outdated building.

While Mayor Small swears the demolition was not about politics, he was not above throwing a few jabs at the former president. Minutes before the tower fell, Small addressed a small crowd of politicians, union laborers, and auction winners during a breakfast event right across the Boardwalk from Trump Plaza.

But even the satisfaction of seeing of seeing Trump Plaza end with a bang could not take away the pain still felt by local contractors who were burned by Trump’s business practices.

In 1983, after Edward Friel finished the carpentry work he was hired to do at the Trump Plaza, Robert and Donald Trump called him to their office. Donald said it bluntly: Edward was not getting any more money for his work. If he said he was happy and moved on, Trump might hire him for a future project. If not, Trump said he could file a lawsuit.

Friel, who was owed $85,000 for building registration desks, bars around the casino and in the suites at the Plaza, decided to sue. He never got the money and his company was blacklisted, his son Paul Friel says, and no general contractors in the casino town would give him a contract after working on the Trump Plaza.

“We couldn’t get work in Atlantic City anymore,” says Paul Friel, who was an accountant for his father’s company. Within four years, Friel’s father’s company, which his grandfather had started, went out of business. Edward got a job selling cars in south Jersey and worked there until he died.

As for what he thinks about the implosion, he’s hopeful for what it means for the future of Atlantic City.

“Am I happy it’s going down? Yes, hopefully a new project will bring jobs and a glimmer of light back to that boardwalk site,” Paul Friel says. “I’m not a vindictive person. Do I like Trump? Of course not. I think he’s a horrible human being. I want this tower to come down and I want it to benefit Atlantic City and people with jobs.”

Carl Icahn, who Forbes estimates is worth $14.6 billion, has not released plans for what will replace the former Trump property. He did not respond to a request for comment regarding his plans, either.

One thing is certain: the Trump Plaza site will not become a glimmer of light anytime soon. The 70-foot debris pile will likely remain until early summer. And until Icahn announces a vision of the property, the lot will likely be paved over and used as a parking lot. Because that’s how Atlantic City rolls.