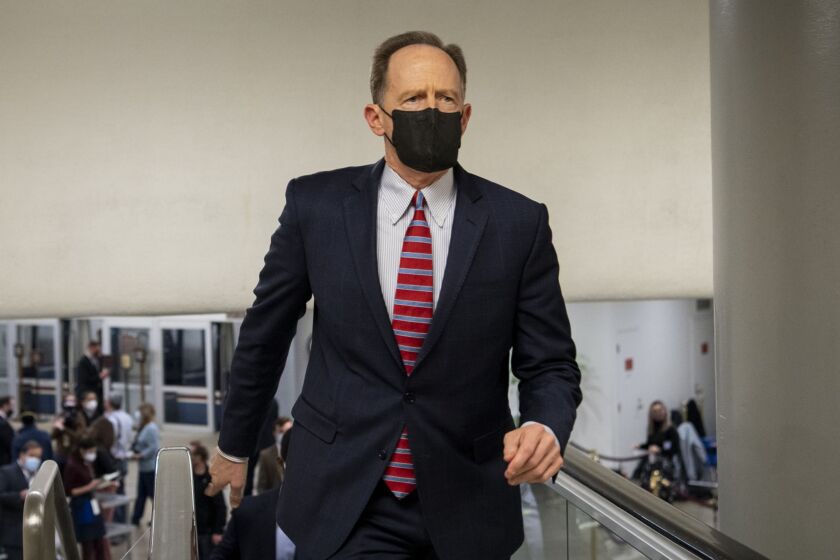 Federal lawmakers and others critical of providing more aid to state and local governments say the money should be more targeted than currently proposed, and warn overspending on relief poses a risk to U.S. financial stability.

During a Senate Banking Committee hearing Thursday, Sen. Pat Toomey, R-Pa., criticized the $350 billionof direct federal aid to state and local governments in the $1.9 trillion dollar relief bill proposed by President Biden, calling it a “terrible idea” and a “bailout.”

“There was no huge collapse in revenue,” Toomey said. “In 2020, state and local governments set a new all-time record high for revenue.”

Others were frustrated that Democrats were pushing forward a “partisan bill.”

“Right now we should be focusing our efforts tracking where that money is needed and also where it isn’t needed,” said Sen. Steve Daines, R-Mont. “Any future relief must be targeted to those that truly need it the most. One part of the package that certainly isn’t needed is a proposal for $350 billion in state and local aid.”

Daines supported aid to state and local governments in 2020, but said now there are fewer unknowns a year into the pandemic.

Revenues across the states are a mixed bag. At the state level, revenues from March to December declined an average of 1.8% compared to a year earlier, according to recent data from the State and Local Finance Initiative of the Urban Institute.

States also faced higher expenses related to the pandemic even if they suffered smaller revenue losses or, in some cases, had revenue gains, said Lucy Dadyan, the institute’s senior research associate earlier this month.

State and local governments have stressed the need for federal aid. The National League of Cities estimated that localities face a $90 billion revenue shortfall for fiscal year 2021.

Right-wing think tank The Reason Foundation found a nationwide decline of 1% of revenue between 2019 and 2020.

“But there is a large range of outcomes, with some states, including Alaska and Hawaii seeing double-digit decreases that were predicted,” Reason wrote in a February report. “Meanwhile, states like Idaho, Colorado, South Dakota and Utah experienced the largest revenue increases.”

A late January JP Morgan report found that 26 of 47 states had a year-over-year decline in tax collections. Also, 21 states saw a growth in tax receipts, the report found.

“What this new pot of hundreds of billions of dollars is actually doing is going to help states that prior to the pandemic, like New York and Illinois, had fundamental fiscal problems,” Daines said.

Dr. Douglas Holtz-Eakin, president of the American Action Forum, told senators Thursday that the $350 billion proposed for municipalities was not justified and said the differences were “stark” across states.

“So if there is a need for some state assistance, it should like everything, be more targeted on places that generally have had a problem,” Holtz-Eakin said.

Critics were also concerned about too much stimulus into the economy, especially when sending money to individuals that haven’t lost income.

The big risk would be individuals putting money into savings accounts and then deciding to invest in the stock market, said Holtz-Eakin.

“Twenty-first-century recessions have been preceded by financial volatility and I worry about the implications of hundreds of billions of dollars sloshing around our financial markets for no good reason,” he said.

3 reasons why Ethereum price keeps rejecting at the $1,300 level
PREPA judge approves one-week delay for restructuring proposal
Bullish on Bitcoin, US Senator Ted Cruz wants Texas to be a crypto oasis
Crypto miners in Russia capitalize on the bear market by hoarding ASIC devices
US economy adds more jobs than expected in November