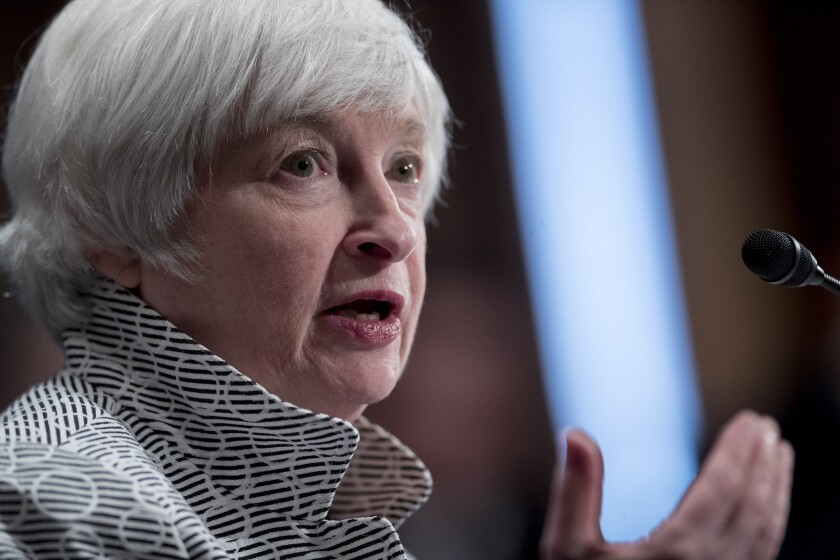 “A wealth tax has been discussed but is not something President Biden” favors, Yellen said at a virtual conference on Monday hosted by the New York Times. She said such a tax would have significant implementation problems.

The administration is looking to boost the corporate tax to 28%, Yellen said. The Treasury chief said last week that revenue measures would be needed to help pay for Biden’s planned longer-term economic reconstruction program to help address concerns about debt sustainability.

Yellen also said that a hike in the capital-gains tax might be something “worth considering.” Asked about a financial-transactions tax, she said, “One would have to examine closely what effect it would have” on ordinary investors.

Turning to climate change, which is set to be a new focus for the Treasury, Yellen said the department may be able to help coordinate climate-related stress tests on banks and insurers — through the Federal Reserve or other regulators.

The Fed already conducts tests to address vulnerability to economic or market downturns, and uses the results as a basis for financial institutions’ capital requirements. Any climate-related tests aren’t expected to have the “same status in terms of limiting payouts and capital” as the regular assessments, Yellen said Monday.

Asked whether the Treasury would consider issuing a 100-year bond to take advantage of low yields, Yellen noted that the government already sells long-term debt. While the Treasury could look again at new securities, market professionals think the demand for a 100-year bond “would be very tiny.” It would “probably be a very thin market,” she said.

The current longest-dated Treasury note is a 30-year security.

While bond yields have climbed lately — in part on expectations of Biden’s $1.9 trillion stimulus proposal passing Congress and stoking economic growth along with faster inflation — they remain historically low. Ten-year Treasury yields hit 1.39% Monday, the highest since last February but still well below the 3.13% average over the past two decades.

Yellen separately signaled the Biden administration supports research into the viability of a digital dollar. “Too many Americans don’t have access to easy payments systems and banking accounts, and I think this is something that a digital dollar, a central bank digital currency, could help with,” she said.

Yellen also said that she hadn’t anticipated an offer by Biden to become Treasury secretary, at a time when she was focusing on research while working at the Brookings Institution.

Noting the round-the-clock stress of a job like helming the Treasury, the former Federal Reserve chair said, “I was initially hesitant to get back into that.” Biden then made the case on how she could be helpful, Yellen said.