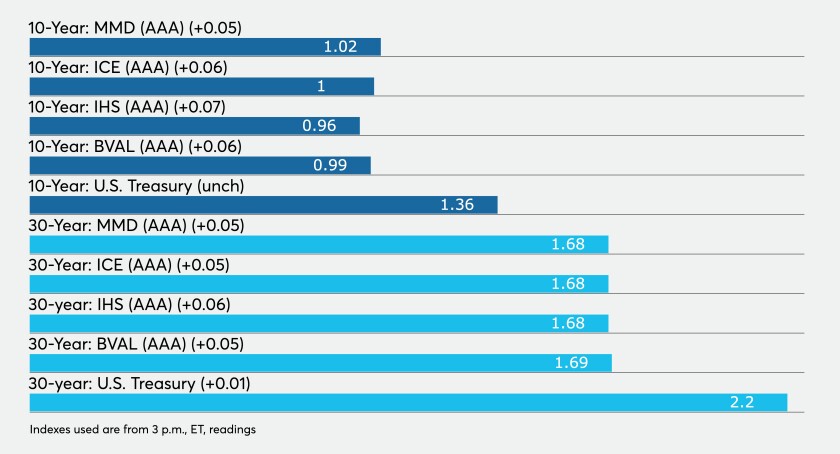 Municipal yields rose for the sixth day in a row Tuesday, pushing the 10-year above 1%, a level not seen since May 2020. High-grade deals priced and secondary trading showed bonds exchanging hands at yields higher than triple-A benchmarks in some cases, but a healthy two-way flow was evident, even if there are signals that yields have not yet found a ceiling.

U.S. Treasuries held steady for most of Tuesday as Federal Reserve Chairman Jay Powell testified before Congress that the bond buying would continue and the economic recovery was far from complete. Stocks were off throughout the day but pared back earlier losses.

The triple-A muni 10-year reached above 1% and the 30-year neared 1.70% Tuesday while some new issues were being priced above 2% out long, including the New York City Municipal Water Finance Authority long bonds, 5s of 2051 at 2.07%.

“I would characterize the weakness that started last week and flowed into the beginning of this week as a long, overdue breather,” said Jim Conn, a portfolio manager for Franklin Templeton Fixed Income’s municipal bond team.

Conn said the yield changes the market has seen since last Wednesday have been broad based and evenly distributed among rating, sectors, and states.

The path toward lower yields since the pandemic began in March 2020 has been barely interrupted over the course of the recovery, and demand has remained steady and strong nonetheless, he noted.

“In addition to the strength from the supply-demand equation, Federal stimulus is likely to enhance issuer balance sheets and bolster credit strength,” Conn said. “Many investors close the muni demand feedback loop with the notion that mounting stimulus packages will be financed, in part, through higher personal income taxes, of course, which leads them back to the muni market for tax protection.”

The state is set to sell three competitive loans Wednesday, which could give even more price discovery for the high-grade space.

Puerto Rico GOs, 8s of 2035, traded as high as 78.125 cents on the dollar after a debt deal was announced between the island and its bondholders. Texas issues were trading weaker, but mostly in line with market moves showing the power and water crisis there has not had a meaningful effect on its debts.

Economy
The consumer confidence index ticked up more than expected in February.

The index rose to 91.3 from 88.9 a month earlier, the Conference Board reported. Economists polled by IFR Markets expected a 90.0 read.

The present situation index gained to 92.0 from 85.5 and the expectations index slipped to 90.8 from 91.2. The rebound in the present situation index “suggests economic growth has not slowed further,” according to Lynn Franco, senior director of economic indicators at the company. “While the expectations Index fell marginally in February, consumers remain cautiously optimistic, on the whole, about the outlook for the coming months.”

The number of respondents who see business conditions as good rose, while those who see them as bad fell. The number who say jobs are plentiful inched up while those thinking jobs are hard to get slipped.

Separately, the Federal Reserve Bank of Philadelphia’s nonmanufacturing survey showed improvement as the general business conditions index at the firm level reversed to positive 7.5 in February from negative 14.3 in January, while the regional index rebounded to positive 3.9 from negative 17.5.

Meanwhile, a Federal Reserve Bank of Dallas survey showed the service sector “picked up at a modest pace in February, with revenue and labor market indicators improving slightly compared with last month,” according to Christopher Slijk, Dallas Fed associate economist.

The report’s general business activity index reversed to positive 5.0 from negative 1.2, while the company outlook grew to 2.7 from 1.0, the revenues index rose to 2.6 in February from 0.8 in January, while the employment index gained to 2.7 from 1.8.

The Federal Reserve Bank of Richmond saw “mixed conditions” in service sector activity in February, with the revenues index declining to negative 6 from negative 3 in January, while the demand index gained to 18 from 7. “Many survey participants also reported increased capital spending over the month,” according to the Fed. “Survey respondents were optimistic that conditions would improve in the next six months.”

The Richmond Fed’s manufacturing survey reported continued improvement in February, with the composite index steady at 14. The local business conditions index slipped to 5 in February from 10 in January.

Also released Tuesday, the S&P CoreLogic Case-Shiller index showed home prices rose 10.4% in December on an annual basis, up from the 9.5% increase in the prior month’s read. The 10-city composite grew 9.8% after 8.9% the month before, while the 20-city composite jumped 10.1% year-over-year after 9.2% growth reported a month earlier.

Primary market
The Regents of the University of California (Aa2/AA/AA/) has several large deals with Jefferies LLC running the books on all of them.