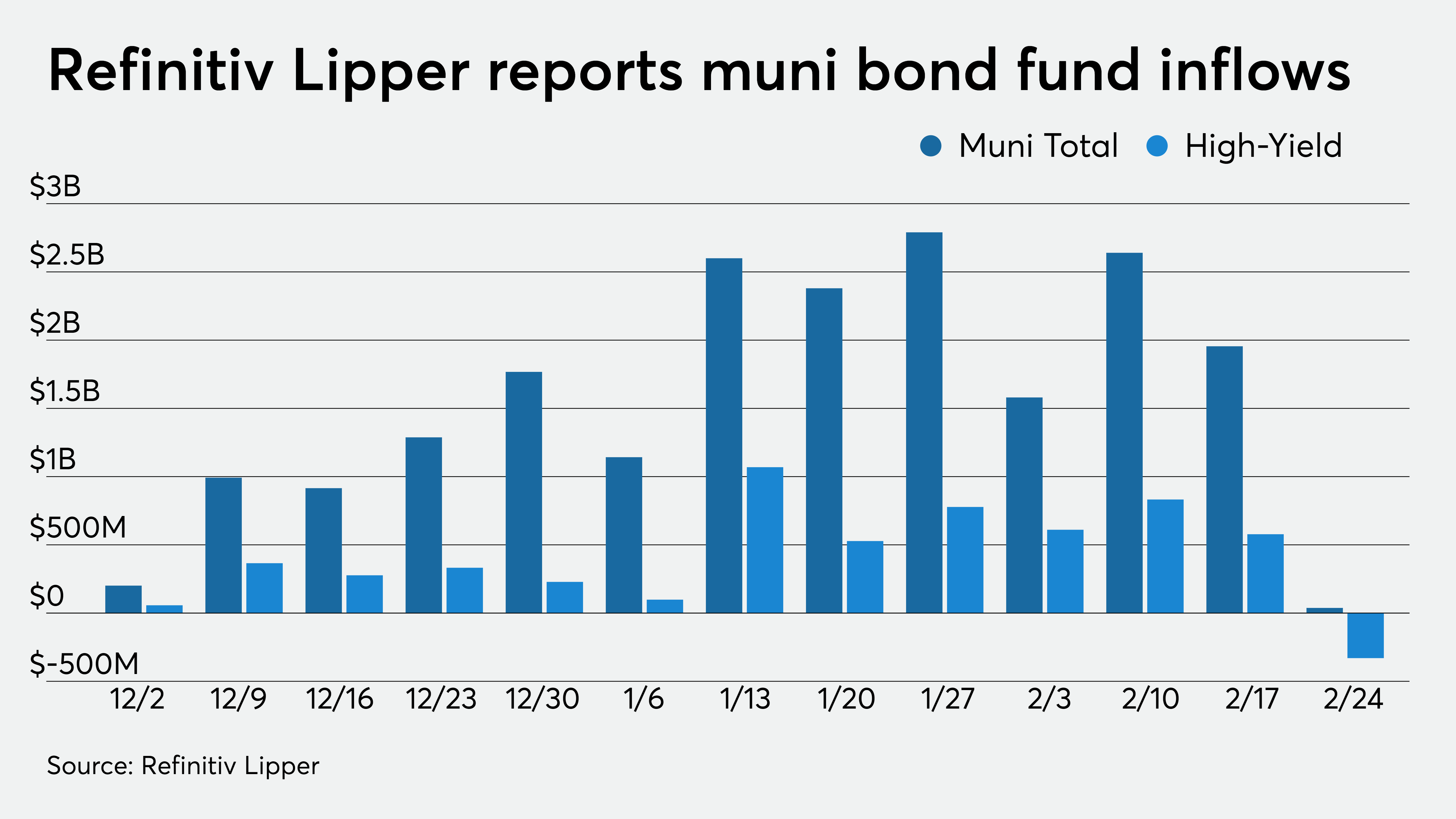 Municipal bond yields continued their ascent, following U.S. Treasuries higher, as markets adjust to rising rates and an improving economy that created an environment in which stocks sold off not because of economic uncertainty but stabilization.

The atypical relationship — falling stocks and rising USTs — is likely temporary as global markets essentially recalibrate, moving away from COVID-impacted investments, such as technology companies, and back into traditional investments that were put on the wayside during the pandemic.

Municipal triple-A benchmarks rose another three to six basis points, with the largest cuts longer out the curve. Munis are correcting after sitting idle for well over a month as its taxable counterparty moved into higher-yield territory.

A lot of the pressure on munis is tied to U.S. Treasury and global bond markets selling off due to the perception of a stabilizing global economy with sunnier views of vaccine effectiveness and stimulus. The 10-year UST broke past 1.50% and the 30-year climbed to 2.31% near the close on Thursday.

Municipal bond mutual funds took notice of the increases as well, with Refinitiv Lipper reporting $37 million of inflows after more than 15 weeks of multi-billion inflows. High-yield funds took a big hit with $330 million of outflows reported after a six-week run of record inflows.

“Munis started the upward migration in yields after Treasuries and so there may be more upside room to go,” said Jeff Lipton, head of municipal credit and market strategy and municipal capital markets at Oppenheimer & Co. “The 35-plus basis point rise in long muni yields since the beginning of February against an unrelenting sell-off in the Treasury market has created some noted institutional interest, yet we are awaiting visible retail support at these new levels.

“We think that when the market settles into a new range, the adjusted ratios will be more realistic and should draw in more investors,” he added.

A deeper dive into the interplay between equities and municipal bonds shows three pivotal periods in the past 12 months, according to Kim Olsan, senior vice president at FHN Financial.

“One possible conclusion is that either munis are oversold or equities are overbought,” she said. “If the fact is that munis have overcorrected (and may still continue to sell off), higher real yields and TEYs will make muni asset allocations more appealing than has been the case over the last six months.”

“If you look at the fundamentals for munis, not much has changed since the beginning of the month. We’re down in supply, demand is still up, but the asset class could no longer ignore UST and broader changes in the economy,” a New York trader said. “In that vein, muni rates had to rise. This much, this fast? I’m not so sure. Oversold and too quick to correct comes to mind. But this market often moves like this when it moves in either direction, so it should not come as a surprise.”

The economy
Thursday’s data was mostly good news, but two Federal Reserve Bank presidents warned the health crisis hasn’t ended, although they expect a big rebound after uncertainties are cleared.

“The backstop programs stemmed an incipient financial crisis during March and April 2020, to the point where current levels of financial stress are at pre-pandemic levels,” he said.

The labor market has improved faster than predicted, suggesting many layoffs were temporary, Bullard added. Also, he expects labor indicators to “be more robust going forward as the pandemic wanes.”

Federal Reserve Bank of Kansas City President Esther George agreed about downside risks. “Many of those risks and uncertainties are tied to the national economic outlook.”

Pointing to the rising number of cases as 2020 ended, she said, it “remains clear that we are not out of the woods yet, with the risk that infections could pick up once again, perhaps aided by new variants of the virus.”

While “policy can help mitigate the economic effects of the virus,” George said, “it is almost impossible to imagine a full economic recovery until the virus no longer impinges on the day-to-day decision making of households and businesses.”

The recovery will depend on three things, she said: “first, the pace and effectiveness of vaccination; second, the outlook for further fiscal stimulus; and third, whether and to what degree households run down the savings that they have accumulated so far through the crisis.”

She noted the highly accommodative stance of the Fed will remain in place for “some time,” while the economy recovers. Recent gains in long-term interest rates, she said, don’t require a monetary policy response since the lion’s share of the increase in the 10-year Treasury reflects “an increase in the real yield, that is the interest rate controlling for inflation compensation.”

Optimism about the recovery could be a large part of the gain, George said. “If this is indeed the reason that yields are increasing, they are unlikely to rise to the point of smothering the optimism that led to their increase in the first place, and measures of real yields remain deeply negative and only a touch off all-time lows.”

Any more stimulus “could exacerbate the unevenness that has been the defining characteristic of the pandemic downturn.” Low rates have helped interest-rate-sensitive sectors, she said. Since the service sector was most affected. “In this situation, further monetary stimulus seems unlikely to help close gaps in the most virus-afflicted sectors while simultaneously running the risk of exacerbating imbalances and shortages in interest-sensitive sectors.”

Finally, no monetary policy action is needed since she expects “a strong bounce back in activity as vaccination proceeds.” And since monetary policy works with a lag, any action now, George said, “could easily be mistimed.”

Despite the large decline in initial claims, the number is still well above pre-pandemic levels.

Gross domestic product rose at a 4.1% annualized rate in the preliminary fourth quarter estimate, up from 4.0% in the advance estimate. In the third quarter GDP soared 33.4%.

Economists expected the tick up in GDP.

With stimulus “highly likely” by mid-March, even if President Biden’s $1.9 trillion package is cut by as much as $700 billion in reconciliation, “GDP will eclipse pre-COVID levels by mid-year and grow over 5.4% in 2021,” said Scott Ruesterholz, a portfolio manager at Insight Investment.

“While a stimulus-fueled consumption boom and favorable base effects will temporarily boost inflation, potentially as high as 3% for CPI, we expect inflation to moderate later this year and into 2022 given the output gap,” he added. “As such, the Fed will likely look through this increase in inflation and continue its accommodative policy, creating a positive environment for markets where corporate cash flow and economic activity materially improves while fears of Fed tightening are unlikely to materialize.”

Durable goods rose 3.4% in January after a 1.2% gain in December, while excluding transportation orders grew 1.4% after a 1.7% gain a month earlier.

Economists expected a 1.1% increase in the headline number and a 0.7% rise ex-transportation.

Orders for nondefense capital goods excluding aircraft were up 0.5% in the month. This number is seen as a harbinger of future business investment plans.

As has been the case in the real estate market, pending home sales slipped 2.8% in January, but were up 13.0% year-over-year.

“Pending home sales fell in January because there are simply not enough homes to match the demand on the market,” according to Lawrence Yun, National Association of Realtors chief economist. “That said, there has been an increase in permits and requests to build new homes.”

Manufacturing activity in the Kansas City region improved both month-over-month and on an annual basis, while expectations also rose.

“Most businesses reported more production and shipments, despite some difficulties due to the extreme weather events recently,” said Chad Wilkerson, vice president and economist at the Federal Reserve Bank of Kansas City. “However, rising materials prices and shipping delays have negatively affected
85% of firms.”

The four-week moving average remained positive at $1.554 billion, after being in the green at $2.242 billion in the previous week.