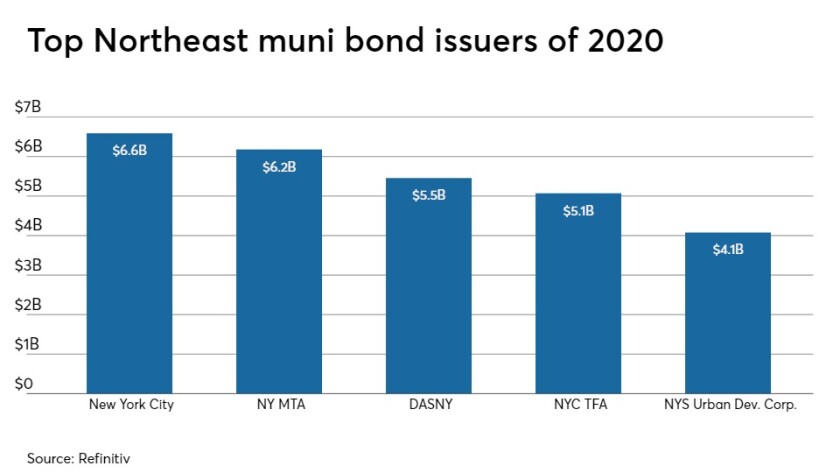 Northeast municipal issuers sold $129.99 billion of debt last year, a 14.7% increase from 2019 as states, cities and agencies scrambled amid the COVID-19 disruption.

Nationally, par amount totaled $483.6 billion, up 13.4% from the previous year, according to data from Refinitiv.

“Issuance was really driven by refunding activity, generally,” said Tom Kozlik, head of municipal strategy and credit for Hilltop Securities. Kozlik, whose firm had forecast $450 billion of activity for the year, cited the low-interest rate environment. “New-money issuance was still not overly meaningful especially considering the low level of interest rates, although it did increase in the Northeast year over year.”

Volume prospects for 2021 hinge on levels of federal aid, including further rescue bills and an infrastructure package, and on interest-rate levels.

New York City, New York State and state-related agencies — including the Metropolitan Transportation Authority, Dormitory Authority of the State of New York, New York State Urban Development Corp. and the New York Transportation Development Corp. — accounted for seven of the top 10 Northeast issuers for 2020. The states of New Jersey, Massachusetts and Connecticut rounded out the list.

The city topped the regional list for volume with $6.6 billion of general obligation bonds through 14 transactions, followed by MTA at $6.2 billion. The MTA operates mass transit in the New York City region.

New Jersey had the region’s single-biggest deal, a $3.7 billion tax-exempt emergency GO offering on Nov. 18, with BofA Securities as lead manager. Despite a downgrade by S&P Global Ratings right before the transaction, strong demand amid a dearth of new municipal issuance by states and a search for yield meant the deal by the second-lowest-rated state was oversubscribed to the tune of $40 billion.

“The Northeast was one of the hardest-hit areas from COVID,” said Howard Cure, director of municipal bond research for Evercore Wealth Management. “Because the Northeast was hit harder than other places, there was just a greater need to restructure debt.”

New York City’s Transitional Finance Authority, a public benefit corporation that finances a portion of the capital improvement plan, was fourth at $5.1 billion with 19 deals while the city’s Municipal Water Finance Authority was ninth at $2.8 billion through eight deals.

Taxable issuance rose 44% as issuers executed advance refundings, which they can no longer do using tax-exempt bonds following federal tax-law changes in 2017.

“There’s no limit to taking out tax-exempt with taxable,” Cure said. “During this period, taxable rates were low enough to make it economically feasible.”

This activity could continue “if interest rates stay where or close to where they are,” Kozlik said. “The amount of refunding activity is likely to be close to what we saw this year as a percentage basis because it is driven by interest rates.”

Issuers in New York State sold $57.1 billion of bonds, putting the Empire State behind only California and Texas.

Transportation-related issues rose nationally by 31.4%. “They particularly need help,” Cure said. “The airports need help and so does mass transit.”

How much borrowing states and localities execute this year, Cure added, could hinge on any national infrastructure bill that passes, separate from stimulus. “The needs are there and the interest rates are low,” he said. Likewise, state and federal aid in general could free up money for local borrowing.

The MTA, whose ridership plummeted as much as 90% at one point from business and entertainment closings and stay-at-home measures to counter the pandemic, was second in Northeast issuance, behind New York City, with $6.2 billion through 22 transactions, not including the $3.4 billion it borrowed through the Federal Reserve’s short-term program, the Municipal Liquidity Facility. If MLF loans were counted, the MTA would have topped the issuer table.

The authority in August sold $450 million of maturing bond anticipation notes to the Fed, then in December borrowed its remaining $2.9 billion available.

Only the MTA and Illinois tapped the facility, which expired Dec. 31. It featured a three-year maturity and offered rates set to an overnight index rate plus a spread based on a borrower’s ratings.

Though limited in duration and use, the MLF helped calm the markets, according to MTA finance director Patrick McCoy.

“The story of the MLF, I don’t think, is as well understood as it should be,” he said. “The fact that this facility was created had an enormously favorable psychological impact on our market, insuring that state and local issuers had a buyer of last resort, so to speak.

“While the program is closed, I can’t underscore enough the importance of that facility, and it enabled us to position ourselves to use it and then get through the year intact.”

New Jersey passed on the MLF and Democratic Gov. Phil Murphy’s administration went with its $3.7 billion GO deal, which landed lower rates in the open market than the MLF would have offered.

Debate over the borrowing followed partisan lines, and resurfaced days ago when Murphy revealed a multi-billion dollar surplus while releasing his $44.8 billion fiscal 2022 budget proposal.

“It’s further proof that there was absolutely no need” for the November borrowing, said State Sen. Steven Oroho, R-Franklin.

New York State Power’s first long-term bond deal since 2015 included its first-ever green bond sale. It featured $1.12 billion of Series 2020A tax-exempt bonds and $114 million of Series 2020B taxable bonds. The largest public power deal of 2020 marked the first New York state financing and one of the first public power deals to come to market after the onset of the pandemic-induced market shutdown.

NYPA set aside $900 million for a Life Extension and Modernization (LEM) project at the Robert Moses Niagara Hydroelectric Power Station; the Moses-Adirondack Smart Path Reliability Project, a transmission build; and other new transmission facilities for integrating additional amounts of renewable energy on the power grid.

Bond-insured deal volume rose 30%, to $9 billion, according to Refinitiv. While Cure does not envision to return to the 50% use of yesteryear, he sees an upswing.

“It’s making a bit of a comeback,” he said. “There is a desire to have it. People see that it’s working.”

That’s no surprise, according to Kozlik.

“The more issues there are to choose from the more we are likely to see them insure,” he said. “We may not see this number rise in 2021 if overall issuance is down.”

Overall issuance, Kozlik added, could get a boost from $1.9 trillion of federal relief if it includes direct, unencumbered aid for state and local governments. Infrastructure legislation is another X factor.

“What happens in D.C. could be an enhancement, but restrictions on the use of money would limit enthusiasm to add debt to balance sheets.”