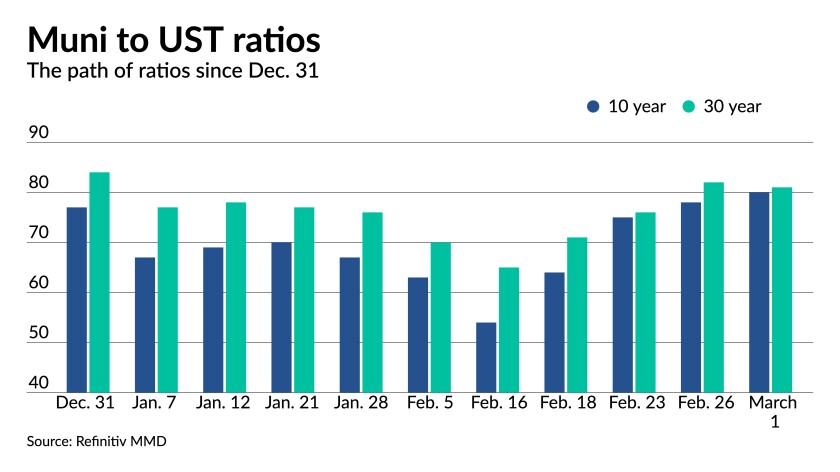 Municipals were little changed Monday as U.S. Treasuries rose slightly and equities rebounded from losses last week, but the damage was done in the back half of February for munis, as rising yields pushed returns into negative territory for the month.

The Bloomberg Barclays Municipal Index posted a -1.59% return in February, bringing the year-to-date total return to -0.96%. Munis outperformed the U.S. Treasury Index, which returned -1.82% during the month.

High-yield saw 1.1% losses but total year-to-date returns are positive at 1.0%.

“Returns were driven by negative performance in the special tax and high-yield tobacco sectors,” according to a Barclays report. “Excluding Puerto Rico credits, the index generated total returns of -0.84%, bringing year-to-date returns to 1.2%.”

“Total return performance was negative across the curve, with the long end underperforming,” Barclays said. “The biggest underperformers were the +22-year (-2.41%) and 20-year (-2.09%) indices. On the opposite side of the ledger, the +1-year muni index performed the best in relative total return terms (-0.03%), with the 3-year (-0.36%) index also outperforming.”

With very little movement in both the municipal and Treasury markets, it was a typical slow, stable, and uneventful Monday to kick off the beginning of March, municipal sources said.

“It’s a Monday and it’s pretty much flat today in terms of not much of any change in the [generic triple-A] scale,” John Farawell, executive vice president and head of municipal trading at Roosevelt & Cross said Monday. “You saw some fun and excitement last week and the 10-year Treasury hit that 1.60%, but today it’s down to 1.44% and the equity market is getting strong again,” he said.

After last week, he said, investors are going to take notice of the municipal market, especially with over $1 billion of New York City general obligation bonds on the docket.

“Supply continues to not be a problem,” Farawell said, noting the market is flush with cash and awaiting the NYC deal.

“That deal’s going to be a bellwether, and I don’t think there will be any problems getting this thing done,” he added. “It’s not like years ago … a billion and a half is not that much.”

He said the deal and other large offerings slated for this week could bring some investors off the sidelines.

“When they know there’s a cut in the scale and the market is starting to fall, they will wait a little bit until they are assured, when the market settles down and they come back in and feel more comfortable,” Farawell said.

In addition, Farawell said investors could also be incentivized by the improvement in the municipal to Treasuries ratios in the intermediate part of the curve. “There have been big changes in the belly of the curve,” he said.

The ratio in the five-year slope, for instance, is currently at 73.7%, up more than 30 basis points compared to the minimum average of 39.2% hit between December 7 and February 26, according to MMD. “That’s going to bring people back in,” Farawell said.

“Regulators and international standard-setting bodies have an opportunity to draw important lessons from the COVID shock about where fragilities remain, such as in prime MMFs and other vehicles with structural funding risk,” she said, according to prepared text of a speech webcast to the Institute of International Bankers.

Among the markets Brainard addressed were money market funds and Treasuries. “For the second time in 12 years, a run on MMFs triggered the need for policy intervention to mitigate the effect on financial conditions and the wider economy,” she said.

This, she said, suggests “the need for reforms to reduce the risk of runs on prime money market funds that create stresses in short-term funding markets.”

Among the possible fixes are a Fed standing facility to backstop repos, “possibly creating a domestic standing facility or converting the temporary Foreign and International Monetary Authorities (FIMA) Repo Facility to a standing facility.” Another strategy would be “wider access to platforms that promote forms of ‘all to all’ trading less dependent on dealers and, relatedly, greater use of central clearing in Treasury cash markets.”

There are tradeoffs with these, and they would “merit thoughtful analysis.”

The manufacturing sector continues to impress, with the Institute for Supply Management’s manufacturing index surpassing expectations and hitting its highest level in three years.

The ISM index rose to 60.8 in February from 58.7 in January. This was the highest since the same number was hit in February 2018, ISM said.

“Were it not for the fact that inventories are so tight, the number would have been even higher,” said Well Fargo economists Sarah House and Tim Quinlan. “Businesses are having such a difficult time getting their hands on materials they are unable to add to inventories.”

Backlog of orders soared to 64.0, its highest level since April 2004, from 59.7 “while the inventories index declined into contraction territory, implying future gains in manufacturing production are on the horizon,” said Scott Anderson, chief economist at Bank of the West. “But with more growth and increasing bottlenecks comes more price inflation.”

“The U.S. economy looks strong, with virus mutations being the main risk to the outlook,” said OANDA’s Moya. “If the next few months do not provide a major reversal in the reopening of the economy, the manufacturing sector could run hot.”

“Construction spending started off 2021 on a high note with all components expanding during the first month, according to Grant Thornton economist Yelena Maleyev. “Those gains will likely ebb in February when we will see the impact from the severe winter weather that hit the nation’s largest region for construction, the South.”

The refunding portion consists of $204.9 million Series HE-A and a $25 million taxable series.

The larger of the offerings is a $372.3 million deal consisting of three series.

The authority’s other deal is $354.3 million and consists of federally taxable fixed-rate bonds in a single 2021 Series F-2.

The taxable series 2021 bonds are structured to mature from 2022 to 2041 and is being priced by Barclays Capital Inc.

The City of Orange, California, will sell $285.6 million of taxable pension obligation bonds in a deal being priced by Stifel, Nicolaus & Co. Inc.

Columbia, South Carolina, is set to price $120 million of waterworks and sewerage system refunding revenue bonds in a taxable series 2021 B structured as serials between 2023 and 2036 and terms in 2041 and 2049. The deal will be priced by Raymond James & Associates Inc.

Mississippi (Aa2/AA/AA/) is set to price sell $119.7 million of taxable GO refunding bonds. The issue will be priced by Wells Fargo Securities.

The National Finance Authority (A2///) on behalf of the VA Birmingham Health Care Center project is set to price $106 million of taxable federal lease revenue bonds in a federally taxable deal priced by Oppenheimer & Co.

Mark Cuban: If I Were Sam Bankman-Fried, I’d Be Afraid of Going to Jail for a Long Time
MATIC attack: How smart crypto traders ‘got out’ before a 35% price drop
EU and US turn up the heat on Musk over Twitter
Defying forecasts, crude oil prices have wiped out most of this year’s gains and could head lower
SIFMA urges new Congress to act on muni issues