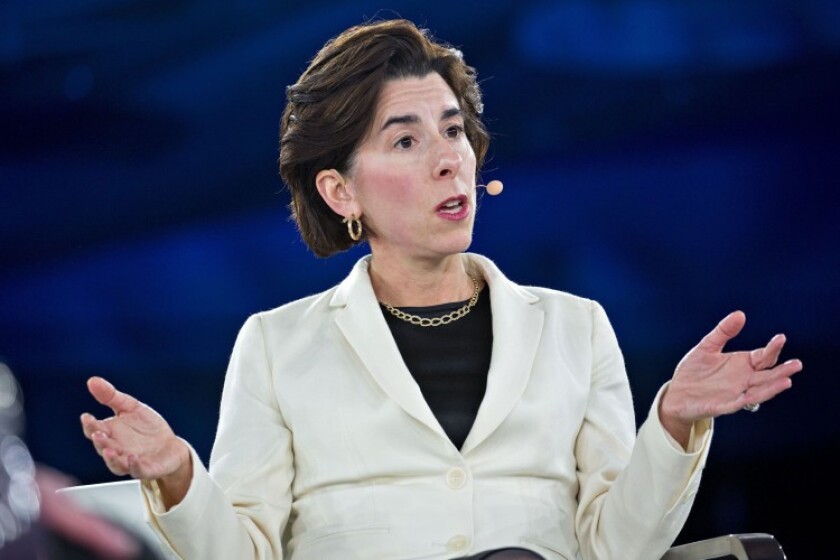 Gov. Gina Raimondo’s confirmation by the U.S. Senate as commerce secretary on Tuesday marked the passing of the torch in Rhode Island to Lt. Gov. Dan McKee.

Democrat Raimondo, 49, resigned after the Senate confirmed President Biden’s January nomination of her to the cabinet position by an 84-15 vote. Approvals included leading Republicans such as Minority Leader Mitch McConnell and Rand Paul, both of Kentucky, and Lindsey Graham of South Carolina.

Sen. Ted Cruz, R-Texas, spoke against Raimondo’s nomination on the floor, referencing what he said were her “evasive” comments about Chinese telecommunications giant Huawei, which the federal government has sanctioned over national security concerns.

McKee, 69, became the state’s 76th governor, with a swearing in by Secretary of State Nellie Gorbea at the capitol in Providence. Raimondo had departed for Washington earlier in the day. McKee, also a Democrat, will serve the remaining 22 months of Raimondo’s second four-year term.

“We are ready to help the people of the state of Rhode Island through this pandemic and also beyond that,” McKee told reporters earlier Tuesday at the Dunkin’ Donuts Center in downtown Providence, after he received a vaccine.

McKee said he and Raimondo exchanged text messages wishing each other well. He became the first Rhode Island lieutenant governor to succeed a governor in mid-term since 1950, when Gov. John Pastore resigned upon his election to the U.S. Senate.

“The nation is lucky to have her, and it is an honor for Rhode Islanders to have one of their own represented in President Biden’s cabinet,” said state General Treasurer Seth Magaziner, who succeeded Raimondo in that office and worked with her at Point Judith Capital, a venture capital firm.

Raimondo, Rhode Island’s first female governor, pushed for economic development initiatives and generated national headlines for pension overhaul legislation that she championed in 2011, while treasurer. Biden in January said Raimondo would be a “key player” in helping position the U.S. as an exporter of 21st-century products and a clean-energy economy leader.

Challenges for McKee, a former Cumberland mayor, will range from effective vaccination rollout to working on the $10 billion-plus budget with top lawmakers, including new House Speaker Joseph Shekarchi, D-Warwick.

“Rhode Islanders had the opportunity to build a stronger, brighter future for our state, and we did just that,” Magaziner said late Tuesday night.

State officials have estimated the total cost at $642 million, based on 20-year loans and a 5% interest rate. Actual rates, however could be lower.

The borrowing included $107.3 million for renovation and modernization of the University of Rhode Island Fine Arts Center, the Rhode Island College Clarke Science Building and the Community College of Rhode Island; $74 million for state beaches, parks, recreational facilities and water projects; and, $65 million of bonds for building and renovating housing projects.

According to official results from the state Board of Elections, transportation infrastructure won by the biggest margin at 80.4%, while Quonset development won by the smallest margin at 58.7%.

Shekarchi, in a push for the housing bond, released a package of legislation on Monday to advance affordable housing.

One of the seven bills would create within the Executive Office of Commerce a deputy secretary of commerce and housing, who will oversee related initiatives and develop a plan that will include affordable housing, strong community building and neighborhood revitalization efforts.

Other legislation would create a legislative commission to study all aspects of land use; prohibit housing discrimination against those who receive government assistance to pay rent; create a legislative panel to study the state’s Low and Moderate Income Housing Act; extend for three years a tax-exemption to encourage more affordable housing development; require towns and cities to allow use of small homes as accessory dwelling units and counted as affordable; and, more easily enable local planning boards to establish a quorum for votes to help prevent delays in development matters.