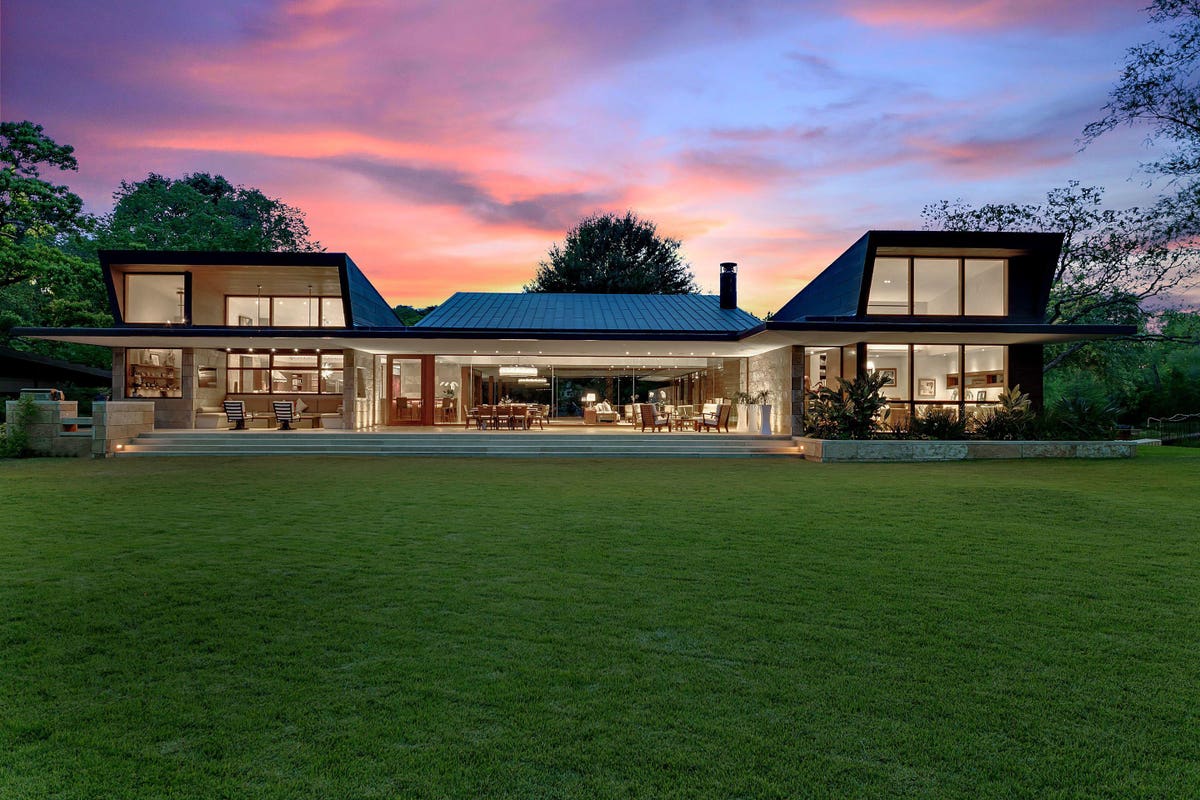 A highly acclaimed lakefront estate in Austin, Texas has set a milestone for the most expensive residential real estate sale in the capital city. Built along the shores of Lake Austin, part of the Colorado River, the contemporary compound was listed for $38.9 million, although the final sale price has not been publicly disclosed.

Known as Willow Beach, the property has won numerous design awards and recognition for its artful blend of creative space indoors and out. It got its name when the original owner planted willow trees on the property and used it as a weekend family beach retreat. Many of the willow trees still stand today.

The estate took 11 years to build due to the required permitting since it is bordered by water on three sides and essentially an island. The main residence was completed in 2010.

“This home boasts an award-winning design by Miró Rivera and was built impeccably with materials imported from around the world,” said Scarborough. “It is simply one of a kind, and we are so honored to have represented such a work of art.”

The estate has two entrances, one for the main house and one for the guest house that are connected by a pedestrian bridge once you are on the grounds. Considering its scale, the estate is private yet in a neighborhood setting on nearly 9 acres with 665-plus feet of main body water frontage plus a large lagoon and boat canal. It is less than eight miles to downtown Austin with easy access to a school and Austin Country Club.

Most of the furniture was handcrafted and custom designed for the house. Willow Beach has been featured in Rivera’s architectural book of contemporary masterpieces and along with the guest house and pedestrian bridge has received numerous local, national and international design awards. The guest house was showcased in Architectural Digest.

“Miró Rivera did an amazing job designing the home with stone, steel and glass construction to encompass the natural beauty of Austin and the water that surrounds it,” said Turnquist.

Distinguished by its quarried limestone exterior, the property features a striking juxtaposition of materials. All stone inside and outside is the same, including the pillars at the cul-de-sac and gate along with all exterior walkways. Interior and exterior vertical walls are rough cut while horizontal surfaces are cut on all four sides to match perfectly.

While the wood in the main house is clad of African sapele, the guest house wood is Brazilian Ipe. A main house wall is molded like the bow of a boat and is seamlessly curved. That feature carries throughout the home from the inside to the outside met by glass. Venetian plaster walls and ceilings are on display throughout.

Other unique features help to define the house, including the powder room sink, which is carved from a solid piece of rare black limestone. The owners handpicked the stone, shipped it from Italy and had it cut locally. The sink had to be brought into the house before walls were constructed because of the size and weight. The fireplace hearth is a solid slab of book-matched soapstone. A cantilevered hidden stairway leads to a media/game room and office on the second floor.

The stately 1,000 square-foot great room is enclosed by glass on both sides. The architecture frames the landscape, disappearing through the transparency of the glass walls. All bedroom windows showcase views of the wetlands that line the private lagoon.

No flexing for Bitcoin Cash users as BCH loses 98% against Bitcoin
China’s BSN chair calls Bitcoin Ponzi, stablecoins ‘fine if regulated’
Better days ahead with crypto deleveraging coming to an end: JPMorgan
Atlanta mayor to head up new P3 task force
Thailand’s Crypto Utopia — ‘90% of a cult, without all the weird stuff’