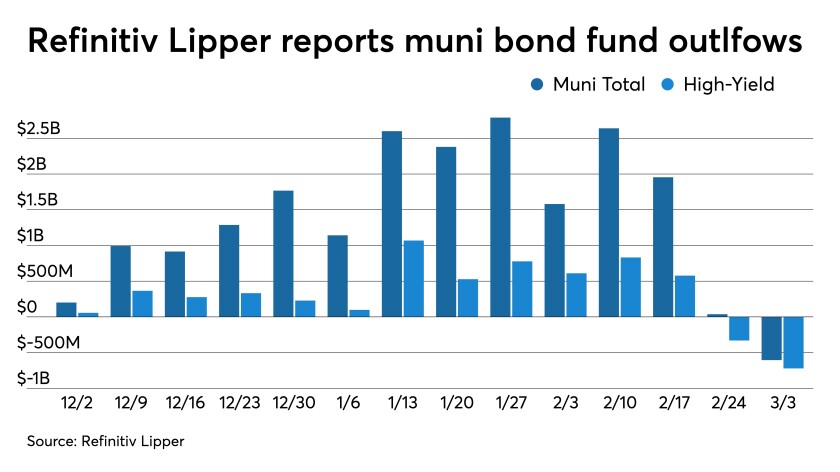 Municipal bonds strengthened across the yield curve Thursday, diverging from rising U.S. Treasuries and a large sell-off in equities after Federal Reserve Chairman Jerome Powell tried to calm investor concerns over inflation and rising rates to no avail.

Refinitiv Lipper reported the first outflows since Nov. 4 at $600 million after $37 million of inflows the previous week, ending a 16-week streak. High-yield funds took an even larger hit, with $722 million of outflows reported after $330 million last week.

The outflows were unsurprising given the large sell-off of more than 40 basis points and uncertainty from retail investors.

However, triple-A muni benchmarks fell two to five basis points Thursday with the biggest drop in bonds in 2023-2028.

“It may be that muni/UST ratios in the 70%-80% range past five years will hold for a period of time now that buyers are being better compensated on a raw yield basis,” said Kim Olsan, senior vice president at FHN Financial.

Since municipal yields have reset higher by 30 to 40 basis points after hitting the lows earlier in February, the market has stabilized somewhat compared to just last week, helped by improved valuations versus other fixed income, according to Ashton Goodfield, head of municipal bonds at DWS Group.

“Although bids wanted remain elevated, bonds are being well-absorbed, and inquiries are re-emerging,” she said Wednesday. She pointed to the “robust” demand for the New York City GO deal as evidence of the continued market strength.

“Sustained stabilization depends on retail investors’ reactions to negative February and year-to-date returns — and whether that leads to fund outflows,” Goodfield said.

The four-week moving average remained positive at $1.008 billion, after being in the green at $1.554 billion in the previous week.

National funds had outflows of $455.823 million after inflows of $22.570 million while high-yield muni funds reported outflows of $721.728 million in the latest week, after outflows of $330.188 million the previous week.

Economy: Powell message stays the same
As expected, Federal Reserve Board Chairman Jerome Powell reiterated that the Fed will stay on the sidelines until there’s “substantial further” progress on its dual mandate of maximum employment and stable prices, which will “take some time.”

Powell dismissed rising yields in the bond market, saying he would be concerned by a “disorderly” conditions or persistent tightening in financial conditions, but since the Fed looks at many aspects of the economy, it wouldn’t necessarily act based on one market’s changes.

While the economic “outlook is becoming more positive,” he told the Wall Street Journal’s jobs summit by livestream, he repeated the Fed will not taper its $120 billion of asset purchases a month until there is “substantial further progress” toward its goals, and it would have to be “actual” not expected.

In order for the Fed to consider rate hikes, he said, it will have to see sustainable inflation of 2% and maximum employment. “There’s a lot of ground to cover before we get” there, Powell said.

While transient inflation is expected since last year’s Spring numbers were quite low, and also when the economy fully reopens, “I expect we will be patient.”

The economy is better than was expected a year ago when the virus first hit, he said, noting no one expected vaccines to be available so quickly.

And despite risks, he said he expects job creation to pick up in the coming months, although the nation won’t reach maximum employment this year.

Economists polled by IFR Markets expected a rise to 760,000.

The increase in claims “reflects some catch-up after winter storms delayed filings in the middle of February,” according to Sarah House, senior economist at Wells Fargo Securities. “While the President’s Day holiday has also interjected some noise to recent weeks’ figures, the four-week average dropped to the lowest level since early December,” she said. “In short, initial jobless claims are finally indicating that the jobs picture is beginning to firm up again after a rough winter.”

Edward Moya, senior market analyst at OANDA, said, “The deep freeze impacted is still being unwound in this week’s reading, but still shows that claims have stabilized.”

With the employment report expected to show jobs added. “A disappointing nonfarm payroll report,” he said, “could mean the difference of a couple hundred billion dollars in the size of President Joe Biden’s COVID relief bill.”

But, the stimulus, rather than the employment report may capture the market’s attention, according to Scott Ruesterholz, portfolio manager at Insight Investment. “While the labor market has largely flatlined since November, markets are not particularly focused on the jobs situation in February, particularly given fiscal stimulus that has insulated the incomes of millions,” he said.” Instead, investors are looking to the outlook with the potential for a return to normal inflection points quickly approaching.”

As states lift or ease restrictions, “the direction of travel over the next two months won’t move in a straight line,” Ruesterholz said. But with rising vaccination levels, “demand for travel, leisure, and recreation” will also grow.

“This combination can provide a virtuous circle of accelerating economic growth and significant job growth, during the second and third quarters,” he said.

Also released Thursday, quarterly productivity fell 4.2% in the fourth quarter, less than the 4.8% in the prior estimate for the quarter, after a 4.2% increase in the third quarter.

Unit labor costs gained 6.0%, less than the 6.8% gain in the preliminary report, after a 9.6% drop in the third quarter.

Separately, factory orders rose 2.6% in January after a 1.6% gain in December, and above the 2.1% rise expected by economists.