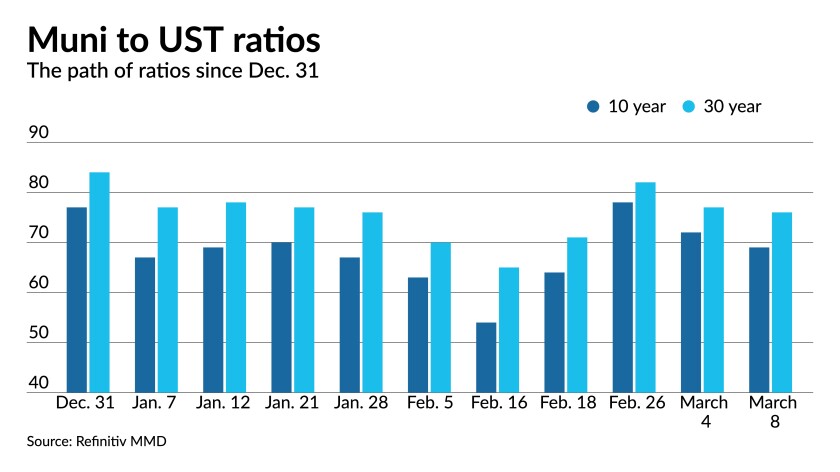 Municipal bonds were little changed Monday in steady trading as investors await a larger-than-usual new-issue calendar. Munis largely ignored the moves in U.S. Treasuries as the 10-year settled in at 1.59% and equities were mixed.

Despite the recent outflows and volatility of the Treasury market, municipal bonds have and should continue to outperform, sources said.

“The market is hanging in here pretty good,” a New York trader said on Monday, almost two weeks after the big market correction that sent yields higher by 40 basis points on the 10- and 30-year benchmarks since Feb. 17.

“Municipals have been a surprise,” he added. “After the sell-off started about a week and a half ago, Thursday and Friday were decent days and today there is a pretty decent bid,” in the secondary market.

He said the past week’s solid performance should spill into this week.

The $575 million New York City Municipal Water Finance Authority offering and $1.9 billion California GO sale, he said, will be the bellwether deals of the week.

“With the outflows and people being more concerned with rates, there’s going to be no heroes this week — underwriters will bring the deals where they can clear the deals,” he said. “Will that be a little cheaper? Yes. But the deals will get done.”

Last week, the New York City general obligation bond offering was well-received due to its attractive pricing, which underwriters bumped five to 10 basis points depending on the maturity, and later traded up five basis points, he said.

“It came cheap, but there is a fair amount of money around for cheap bonds,” the trader said, noting the impact of the sell-off has meant many investors are moving off the sidelines and into the market.

”You had a recalibration of rates that has pushed some people back in buying bonds cheaper than where they were two weeks ago,” he said.

While volume remains “pretty thin,” he said much of the future municipal activity and performance hinges on the progress of the stimulus bill in Washington.

While some people may have a more negative outlook on interest rates than they did two weeks ago, the trader said the federal stimulus package will provide guidance on the market and direction of rates ahead.

While there is not enough supply to currently pressure the market, the trader said he expects municipals to remain steady under similar current conditions going forward.

“It seems if we stay in this range Treasury-wise, we probably will continue to modestly outperform and hang here,” he said.

Inflation still the word
With little on the slate for economic data, the question about the economy continues to revolve around inflation.

The lessons of the financial crisis helped the Federal Reserve and the government react to the COVID crisis, said David Kelly, Chief Global Strategist at JPMorgan.

“The economy is already surprisingly warm and, with the help of very aggressive policy, is likely to heat up quickly from here,” he said. “However, the critical question remains whether they have the skill and discipline to turn the policy temperature down to a simmer before inflation, and not just the economy, comes to a boil.”

The American Rescue Plan, likely to receive final passage and be signed by President Biden this week, “should be particularly effective at spurring a sharp economic recovery,” Kelly said. And while a minimum wage hike isn’t included, the temporary $300 increase in unemployment benefits will force service-sector employers to pay above $15 an hour to attract workers, he added, which “would also add to inflation pressures.”

And while consumer price index inflation has been tame, the year-over-year numbers are likely to jump in the next few reads since last year’s numbers were so low. But, Kelly sees “some further upward pressure” by year-end, “as booming demand meets limited supply for both goods and services.”

As a result, by the fourth quarter, year-over-year inflation should be above 2%. He suggests the Fed may need to signal tapering its bond purchases early next year, and eventually higher interest rates.

“However, it is also important to recognize that higher long-term interest rates might not, on their own, take the economy off the boil,” Kelly warned. Should Congress extend some provisions of the American Rescue Plan beyond 2021, “the economic surge could extend through 2022, pushing unemployment down to new modern era lows and igniting higher inflation both in wages and in goods and services,” he said, adding such a scenario “would pose an immediate risk to the bond market.”

And if the response was “more hawkish policies,” Kelly said, “it could lead to a bust following a boom for both the economy and stock market.”

Consumers see slightly higher inflation for one-year ahead, according to the Federal Reserve Bank of New York’s survey of consumer expectations. Respondents see 3.1% inflation in the year ahead, up from 3.0% a month ago, while three years out, they still expect inflation at 3.0%.

Consumers expect prices of gas and rent to soar, with the one-year expected gas price change climbing to 9.6% in February, a series high, from 6.2% in January, while rent prices are seen rising 9.0% compared to 6.4% in January.
Wholesale inventories grew 1.3% in January, following a downwardly revised 0.6% gain in December, initially reported as a 1.3% increase, while wholesale sales surged 4.9% after a 1.9% jump a month earlier.

Economists polled by IFR Markets expected inventories to add 1.3% and sales to climb 1.4%.

Also released Monday, the employment trend index rose to 101.01 in February from 99.689 in January, the Conference Board reported.

The gain “signals strong job growth in the coming months,” according to Gad Levanon, head of the think tank’s Labor Markets Institute.

“The combination of declining new infections, lower pandemic-related restrictions, households flush with savings, and large government stimulus will all contribute to robust growth in economic activity and employment in 2021. The economy is likely to add 5 to 6 million jobs through the end of the year, and the unemployment rate will drop well below 5%. When the pandemic hit, a tight labor market appeared years away, but it may reemerge as soon as 2022.”

High-grade municipals were largely steady compared to the prior trading day, according to final readings on Refinitiv MMD’s AAA benchmark scale. Short yields remained steady at 0.08% in 2022 and 0.13% in 2023. The 10-year and 30-year each fell one basis point to 1.11% and 1.76%, respectively.

Primary market
California is set to price $1.9 billion of general obligation bonds Thursday with BofA Securities running the books. Serials and term bonds structured as $881 million of Series 1 bonds and $970.9 million in a refunding series.

The New York City Municipal Water Finance Authority is set to price $573 million of water and sewer system second general resolution revenue bonds priced by Loop Capital Markets on Wednesday. The deal consists of Series 2021 DD serials due in 2025, 2026, 2029, 2031, 2033, 2036, and 2038 and will have a retail order period on Tuesday, followed by institutional pricing on Wednesday.

A $417 million Massachusetts Port Authority deal of serial and term revenue bonds scheduled for pricing by Citigroup on Wednesday.

Wisconsin is set to price $313 million of transportation revenue and taxable refunding bonds in a serial and term structure of slated for pricing on Wednesday by Morgan Stanley & Co.

A $296 million Union County, North Carolina, serial and term revenue bond issue with serials maturing from 2023 to 2051 is slated to be priced by Baird on Wednesday.

A $254.9 million city and county of San Francisco taxable GO bonds issue is slated for pricing by Morgan Stanley on Thursday.

The Jackson Laboratory will sell $203 million of taxable corporate CUSIP bonds in a deal being priced by Barclays Capital Inc. on Wednesday.

The Board of Regents of the Texas A&M University System will sell $173,8 million of revenue financing system bonds in Series 2021A as serial bonds from 2022 to 2041 and term bonds in 2046 and 2051. The deal will be negotiated by RBC Capital Markets on Thursday.

The California Community Housing Agency is set to price $161.5 million of essential housing revenue bonds on Wednesday priced by Jefferies.

Howard University is selling $152.7 million of taxable corporate CUSIP bonds in a deal priced by Barclays.

A $148.1 million sale of taxable GO refunding bonds by the Southwestern Community College District is slated for pricing by Morgan Stanley on Wednesday.

The San Mateo-Foster School District will sell $145 million of Series A and B GO bonds priced by RBC Capital.

The Ohio Water Development Authority is set to price $100 million of drinking water assistance fund revenue bonds in Series 2021 A serials from 2030 to 2034 and terms from 2035 to 2039 priced by Huntington Securities Inc.