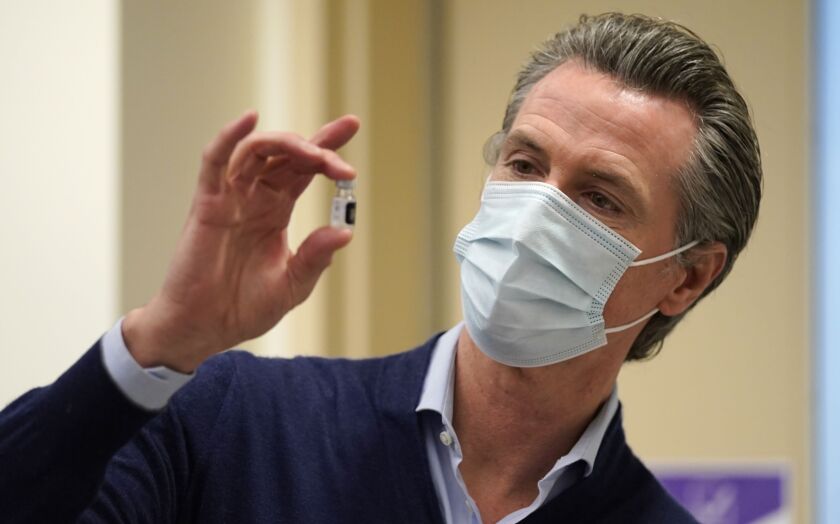 California Gov. Gavin Newsom gave his third State of the State speech this week in an atmosphere shaped by a year-long pandemic and the threat of a recall election.

With the pace of vaccinations rising and new COVID-19 cases falling, the governor pitched plans, including a $10 billion infrastructure proposal, that he said would lead California out of the pandemic into a brighter future.

The proposal, part of his rebooted five-year, $53 billion infrastructure plan originally included in the budget he proposed in January 2020, would focus on roads, rail, bridges and public transit.

Calling it the biggest infrastructure package since the 2008 recession, Newsom said, it would help restart the economy and also build toward universal broadband connecting all Californians equitably and affordably.

After delivering his first two State of the States mid-day in front of state lawmakers in February, Newsom delivered the speech in March, and at night, for the first time in recent history. It came after the passage of a law designed to encourage school districts to return to in-person instruction and the easing of pandemic safety restrictions as case numbers dropped.

Flanked by giant video screens, broadcasting Zoom videos of Democratic leaders on one side, and California scenes including the Hollywood sign and cars lined up at vaccine sites on his opposite side, Newsom said it was symbolic that he delivered the speech there, because the 52,000 vacant stadium seats nearly equal the 54,395 Californians who have died of COVID-19.

“I am standing at the home of last year’s Major League Baseball champions that has been turned into this year’s vaccine site,” Newsom said. “Even as we grieve let’s give ourselves time to imagine brighter days ahead.”

According to Newsom, the number of COVID-19 cases has fallen from a peak of 53,000 cases a day to 2,600. The positivity rate has dropped to 2.1% from 14% and hospitalizations are down 80%. And 11 million doses of the vaccine have been administered, which, he said, is 3 million more than any other state.

He spoke under the threat of a recall funded by right-wing donors and energized by anti-mask sentiment and grievances against lockdowns and pandemic-driven closures of germ-spreading enviroments like bars, restaurants and gyms. Recall leaders said on March 3 they had gathered 1.9 million signatures, more than the 1.5 million valid signatures they need by next week to put a recall election before voters.

Newsom’s term ends next year, and he would be up for re-election in November 2022 without the recall.

“This governor is in denial about the extent of his one-man rule mismanagement and the ensuing devastation done to California,” Gallagher said in a statement. “His policies and directives have crushed small business and have had detrimental impacts to the health and wellness of California’s children. No amount of bluster and political spin can change this reality.”

Newsom struck an optimistic tone Tuesday, citing a budget surplus he said was created by planning ahead and through prudent fiscal management, and barely mentioning his detractors.

“We started this year with $15 billion surplus and since then revenues have grown stronger,” Gov. Gavin Newsom said. “The building blocks of our recovery are already in place. Because we listened to the experts and were guided by evidence. Today, the light at the end of the tunnel is brighter than ever.”

The surplus allows the state to “provide a down payment on building our brighter future,” Newsom said.

Analysts have attributed the size of the surplus to the state’s reliance on income taxes and office workers who were able to work from home and the strength of last year’s stock market, which boosted revenues from capital gains. The reason that S&P Global Ratings rates California AA-minus rating and not higher, is its dependence on capital gains, S&P analyst David Hitchcock told the Bond Buyer in January.

The infrastructure plan, included in Newsom’s budget proposal released in January, noted that many capital projects were paused in 2020 due to fiscal uncertainties related to the COVID-19 pandemic, and that this year’s version demonstrates “renewed commitment to these investments as a key driver in California’s economic recovery.”

Projects to be funded in the proposal include $1.6 billion to renovate state office buildings in Sacramento and purchase two more, $2.1 billion to renovate court buildings, $1 billion for forest resiliency and wildfire prevention, $715 million to replace fire stations and build attack spots for the state’s new C-130 firefighting aircraft, and $1.1 billion to local rail transportation projects in northern and Southern California that would eventually connect to high speed rail.

A $5.5 billion climate resilience bond proposed in Newsom’s spending plan in January 2020 for the November 2020 election was dropped last year as concerns around the pandemic took precedence.

In December, Sen. Anthony Portantino, D-Los Angeles, reintroduced Senate Bill 45, the Wildfire Prevention, Safe Drinking Water, Drought Preparation, and Flood Protection Bond Act of 2022, which if approved by the Legislature and governor would go before voters in November 2022.

The governor’s largely upbeat and energetic 28-minute speech, one of his shortest, only briefly mentioned the recall when he criticized “naysayers and dooms-dayers.”

“To the California critics out there who are promoting partisan political power grabs with outdated prejudices, and rejecting everything that makes California truly great, we say this: We will not be distracted from getting shots in arms, and our economy booming again,” Newsom said. “This is a fight for California’s future.”

Former San Diego Mayor Kevin Faulconer, a Republican, announced in February plans to run against Newsom if the recall election becomes a reality.

“As we mark one year of fighting COVID-19, Californians are struggling,” Atkins said. “Too many people are still hanging on. They need us to do more. Our colleagues in the Senate and Assembly know that and the governor knows that. President Joe Biden and Vice President Kamala Harris are working on aid for all 50 states. That is greatly appreciated. But, when all said and done, we are the ones who have to keep Californians healthy, housed and employed.”