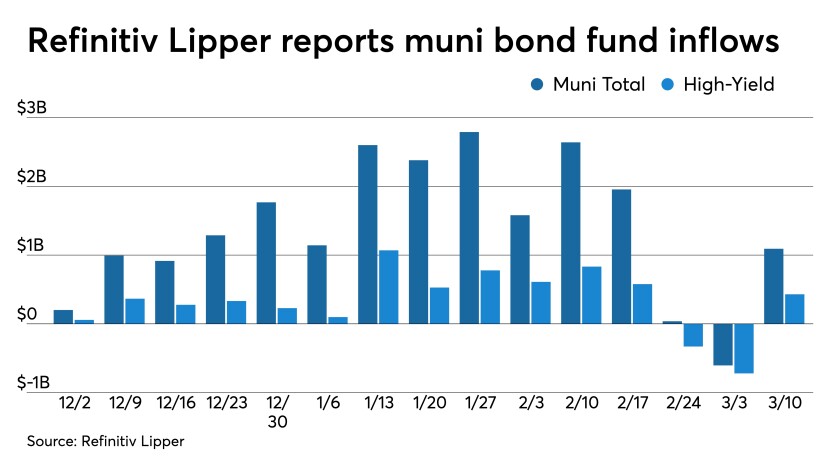 Municipal bonds had a day to remember on the one-year anniversary of the official designation of the COVID-19 pandemic rampage, while President Biden’s signature sealed a $1.9 trillion stimulus package that will buoy state and local budgets across the country and put raw dollars into taxpayer hands.

“If there was a day to have the stars align, it just might be March 11, 2021,” a New York trader said. “Biden signed the stimulus. It is quite clear the benefits it will have on this sector, not just to state and local government budgets, but also to direct spending that is likely to occur. While some investors might not want to see muni yields on the downward slope once again, the technicals are quite clear at the moment that there was nowhere else to push them.”

Refinitiv Lipper reports $1.09B inflow
In the week ended March 10, weekly reporting tax-exempt mutual funds saw $1.092 billion of inflows. It followed an outflow of $600.044 million in the previous week.

The four-week moving average remained positive at $620.074 million, after being in the green at $1.008 billion in the previous week.

In the primary, BofA Securities priced for institutions a $1.86 billion GO offering for California (Aa2/AA-/AA/) with large bumps from the retail scales.

A $100.98 million New York City Educational Construction Fund was won by Banc of America Securities on Thursday in the competitive market — and offered attractive yields to the generic market.

Claims fall, but remain high
Initial jobless claims dropped more than expected in the week, as reopening continued slowly, but the total remains higher than any week before the COVID crisis hit.

“This is the least awful it has been over the past year,” is how Tim Quinlan, senior economist at Wells Fargo Securities, termed it.

Economists expected 725,000 claims in the week.

“The downward trend with jobless claims remains and expectations are growing that the labor market is about to takeoff,” said Edward Moya, senior market analyst at OANDA. “The deep freeze impact that hit many jobs in the South is behind us and the future is looking bright due to the coronavirus vaccine rollout success.”

This summer, leisure and hospitality jobs should see a big rebound if reopening continues, he added.

“The downward trend should accelerate, and claims should fall below 600,000 by April,” Moya said.

FOMC preview
The Federal Open Market Committee meets March 16-17, and while it won’t change the fed funds rate or its asset purchases, it could “make some technical moves to try and lift rates at the short end of the curve,” according to Luke Tilley , chief economist at Wilmington Trust.

With much liquidity in the system and more on its way, “the Treasury is mandated to draw down its pile of cash by this coming August,” he added, “that could add to the pressure at the short end of the curve and some bills into negative territory.”

Among the options for the Fed, Tilley said, is increasing the Interest on Excess Reserves (IOER) or Reverse Repo program “to push up on rates from below.” Another possibility is a twist, with the Fed “selling short-term securities and buying longer-dated ones.”

If either or both happen, he said, “they would stress these are technical maneuvers in reaction to unique circumstances weighing on short-term rates.”

Or, the Treasury could get an extension beyond August on the requirement to draw down cash balance, Tilley suggested.

Bond market participants, he said, “have aligned their inflation expectations with the Fed’s new operating policy as measured by TIPS breakevens. The 5-year inflation breakeven just above 2.5% reflects the Fed’s desire to get inflation above their longer-term goal, while the 5-year forward breakeven (years 6 through 10 of the next ten years) shows an expectation that inflation would come back down to roughly 2%. That is precisely what the Fed is attempting to engineer with the new policy.”

But despite that, the Fed still has concerns. “The Fed’s biggest fear, and the thing they lose sleep over, is the prospect of long-term inflation expectations drifting inexorably higher,” he said. If business and consumers expect accelerating inflation, it could be “a non-virtuous self-fulfilling prophecy that would need to be addressed quickly.”

As long as long-term inflation expectations stay low, the Fed can work to get shorter-term levels above the 2% target, according to Tilley.

Tame consumer price index reading this week will allow the Fed to keep things as is, according to Steven Skancke, chief economic adviser at Keel Point and former White House and Treasury Department staff member. “As a result of the favorable pricing data, the 10-year Treasury yield also pulled back, having touched above 1.6% earlier this week, compared to 0.55% last August and 1.11% just prior to the January FOMC meeting,” he said. “This reduces pressure on the Fed to start a yield-curve management program which some analysts have advocated.”

But the panel remains focused on the ailing labor market, with about 20 million Americans still collecting unemployment benefits and 5 million out of the labor force as a result of COVID disruptions, Skancke said.

But other issues await. “The next big challenge for the FOMC and Fed Chair Jerome Powell will be to navigate concerns that the Fed’s policy shift of looking at average inflation rates will not work or will be misinterpreted,” he said. The reaction to Powell’s recent “comments about interest rates and inflation are a reminder of this topic’s sensitivity, especially to financial markets.”

Chip Barnett and Christine Albano contributed to this report.