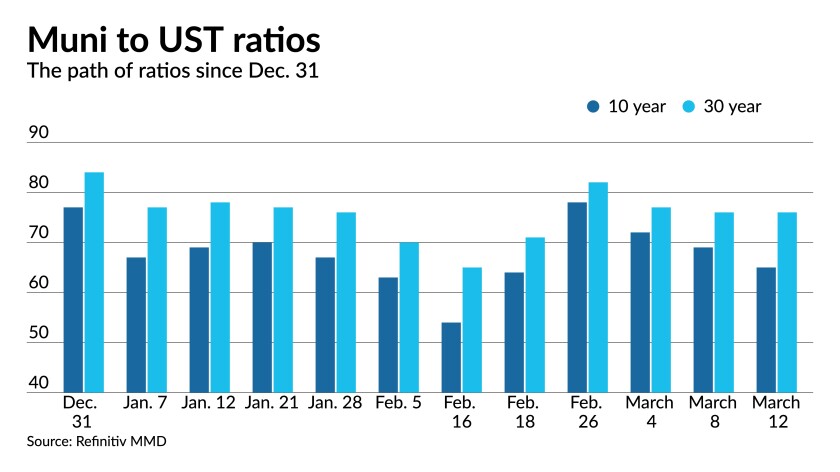 Municipals outperformed a sell-off in U.S. Treasuries as the secondary market was quiet in mixed trading, while the 10- and 30-year benchmark Treasury bond each rose 10 basis points .

Traders and analysts said while there were some trades that were off, with lighter activity, municipals mostly ignored the moves in U.S. Treasuries, once again diverging from their typical tandem relationship with their taxable counterparts.

“The MMD scale appears to be unchanged, but if size was out for the bid, munis would trade off,” a New York trader said Friday. “Munis are very expensive versus the Treasury market. Traders are very cautious and concerned about next week’s calendar.”

The arrival of over $11 billion of new municipal issuance next week — the largest week of 2021 — will test the market.

Potential volume for next week is estimated at $11.706 billion, up from sales of $6.721 billion this week. There are $10.028 billion of municipal bond sales scheduled for negotiated sale next week, versus a revised $4.28 billion that were sold this week. Meanwhile, the competitive slate totals $1.677 billion compared with $2.440 billion this week.

“We are seeing a repeat of what happened earlier this year: Treasuries are selling off with the UST curve bear-steepening, but tax-exempts are actually outperforming, and the front end is doing especially well in ratio terms,” Mikhail Foux wrote in a weekly Barclays municipal report. “It is rather hard to be negative on state and local governments when they are likely to earn enough revenue to decrease their need to deficit fund, and also while supply will likely pick up later this year (thus far it has been well below last year’s pace).”

After a short period of volatility, credit spreads have resumed their tightening trend; while investors continue to focus on investment-grade names with wider spreads and high-yield, with double-B and single-B segments doing well, Foux wrote.

“At times of increased market volatility, taxable munis typically outperform corporates, and this time around is no different,” according to Barclays. “The spread differential between taxables and corporates has tightened across all ratings, but for some rating buckets (like BBBs), it is still cheaper than pre-crisis, mainly driven by Illinois GOs, which represent a substantial portion of the BBB-taxable index.”

“With the outlook for the state improving and the risk of a downgrade subsiding, taxable Illinois GO spreads are still looking relatively attractive to corporate BBBs and have room to catch up, in our view, although investors should keep in mind that the opening arguments of the lawsuit brought against Illinois GOs might cause some volatility next week,” the Barclays report noted.

Analysts said the municipal market remains strong and resilient, aided by government intervention that continues to fuel demand and keep the focus on market technicals.

In addition, the $1.9 trillion stimulus package is chock-full of funding for municipal market issuers, and will stabilize the market credit and likely push credit spreads tighter, according to Bank of America Securities municipal research strategists Yingchen Li and Ian Rogow.

Direct aid to state and local governments dwarfs shortfalls and revenue declines, the analysts said in a report on Friday.

They noted that the more than $30 billion for public transit, nearly $170 billion for K-12 and higher education, and over $8 billion for rural hospitals, among billions more, will aid municipalities’ coffers.

They characterized the situation as “fast debt growth, but even faster revenue growth,” thanks to the new stimulus bill.

Ratios inside the 10-year slope of the yield curve should continue to decline and may revisit the mid-February lows in the next several months, they said.

Inflation data, again
The producer price index gained less in February than in January, while the core was tame, as energy prices (up 6.0%) pushed up the headline number. Also, labor market softness might make it difficult for those increases to be passed on to consumers.

Given these numbers and the consumer price index data from earlier in the week, core personal consumption expenditures for February will show a 1.5% gain year-over-year, while the headline number will be 1.6% higher than a year ago, according to Morgan Stanley researchers, led by economist Ellen Zentner. This, of course, is less than the 2% inflation the Federal Reserve targets.

The data suggest “a modest climb in overall prices,” according to Edward Moya, senior market analyst at OANDA, “and that is why Treasury yields pushed higher following the release.”

Expect a big jump next month, when the year-ago figures show the COVID slowdown, which “could bolster the argument that runaway inflation is a short-term risk.”

Also released Friday, the University of Michigan consumer sentiment index grew to 83.0 in March, its highest read in a year, from 76.8 in February, while the current conditions index climbed to 91.5 from 86.2 and the expectations soared to 77.5 from 70.7.

Economists expected the sentiment index to rise to 78.0, the current conditions to increase to 88.3 and expectations to improve to 74.0.

Primary market
The mammoth $2.2 billion Dormitory Authority of the State of New York deal will be priced by Morgan Stanley & Co. on Thursday is structured as Series 2021 A tax-exempt personal income bonds rated AA-plus by Standard & Poor’s and Fitch Ratings.

The state of Illinois will share the spotlight next week on Tuesday with $1.25 billion of general obligation notes structures in three series, $850 million in 2021A, $150 million Series B, and $259.9 million in refunding Series C. Morgan Stanley will price the bonds, which are rated Baa3 by Moody’s Investors Service.

An $805 million offering of Missouri Health and Educational Facilities Authority health facilities revenue bonds on behalf of BJC Health System will be priced by RBC Capital Markets on Thursday consisting of three series of bonds which are rated Aa2 by Moody’s and AA by Standard & Poor’s.

On Tuesday, the California Housing Finance Agency is slated to sell $522.6 million of Series 2021-1 Class X certificates, which are variable-rate, partially tax-exempt, and not subject to the alternative minimum tax.

The bonds, which are structured to mature as a bullet maturity in 2035, are rated BBB-plus by Standard & Poor’s and are slated to be priced by Citigroup Global Markets Inc.

Elsewhere in the region, the state of Oregon will issue $453.5 million of general obligation bonds in three tax-exempt series priced by Morgan Stanley & Co.

Oregon will also sell $173.54 million of federally taxable GOs on Tuesday in a Morgan Stanley-priced offering.

The city of Huntington Beach, California, meanwhile, will sell $363.62 million of taxable pension obligation bonds in Series 2021. The deal, which will be priced by Stifel, Nicolaus & Co., is rated AA-plus by Standard & Poor’s and Fitch.

Back in the Northeast, the University of Massachusetts Building Authority will sell $317.32 million of refunding revenue bonds in Senior Series 2021-1 on Wednesday. The bonds will be priced by Citigroup with a serial structure maturing from 2021 to 2037 and rated Aa2 by Moody’s, AA-minus by S&P and AA by Fitch.

The New York Transportation Development Corp. will sell $269.33 million of exempt facility revenue bonds in Series 2021, which is tax-exempt and subject to the alternative minimum tax.

The Louisville/Jefferson County, Kentucky, Metropolitan Government is on tap to sell $198 million of pollution control revenue bonds in 2003 Series A and 2001 Series B bonds, both for the Louisville Gas & Electric Company Project. The bonds are rated A1 by Moody’s and A by Standard & Poor’s.

Trimble County, Kentucky, meanwhile, will sell pollution control revenue bonds in 2001 Series B for the Louisville Gas and Electric Company Project in a remarketing of $128 million of Series 1 and $35 million in Series 2 and 3. Morgan Stanley is the book-runner.

A $193.2 million refunding from Wake County, North Carolina, is on tap for pricing on Wednesday in a negotiated sale underwritten by Wells Fargo Securities.

The gilt-edged offering consists of GO public improvement bonds structured as serial bonds maturing from 2022 to 2038.

The Memphis-Shelby County, Tennessee, Airport Authority is expected to land $172.5 million of airport revenue bonds in a four-pronged deal, the largest of which is Series 2021A, subject to the alternative minimum tax and structured as serials maturing from 2025 to 2026 and 2030 to 2040, and terms in 2045 and 2049.

The bonds, which are rated A2 by Moody’s, A by Fitch, and A-plus by Kroll Bond Ratings, is being priced by Raymond James & Associates.

The Riverside County Office of Education will sell $171.7 million of pooled cross fiscal year 2020-2021 tax and revenue anticipation notes in Series A and B on Tuesday with UBS Securities as the bookrunner.

BofA Securities is the underwriter.

The bonds, which are rated A3 by Moody’s, A by S&P and A-minus by Fitch, are being priced by BofA Securities.

The Orlando Utilities Commission, meanwhile, is bringing $154.8 million of utility system revenue bonds to market on Wednesday in a deal priced by Wells Fargo Securities.

Both series are rated Aa2 by Moody’s and AA by S&P and Fitch.