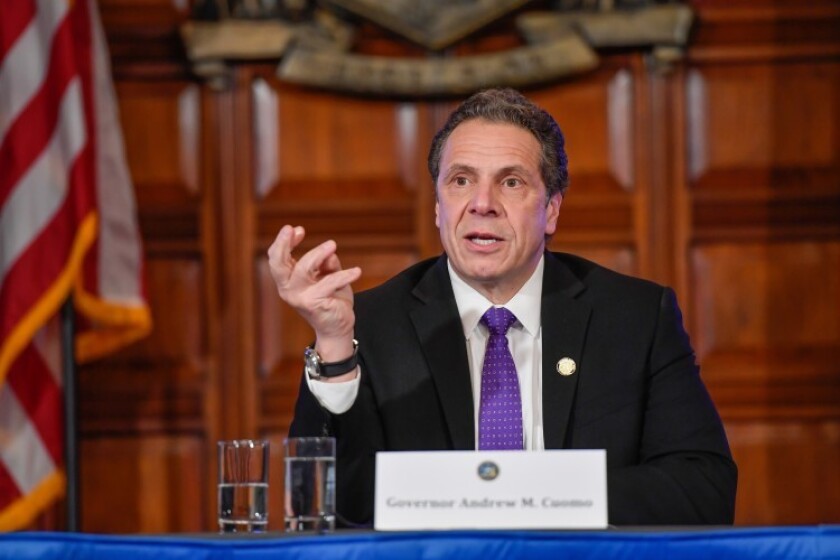 Just how during this whirlwind is a huge question.

On Thursday, the state Assembly took the first step toward impeachment proceedings against the third-term Democratic governor over sexual misconduct accusations and an alleged cover-up of COVID-19 related nursing home deaths. After a conference call with lawmakers, Assembly Speaker Carl Heastie, D-Bronx, authorized the Assembly’s judiciary committee to open an impeachment inquiry.

Meanwhile, a state budget is due in less than three weeks. A COVID-19 vaccine rollout is under way. And on Tuesday, the capital markets will chime in as the state sells $636 million of general obligation bonds.

The parallel scandals have made the strong-willed Cuomo’s hold on power wobbly.

Seven women have accused the governor of sexual misconduct. One said in an Albany Times-Union report that he groped her at the executive mansion, prompting a referral to Albany police.

The governor called the charges “gut-wrenching” but denied any groping.

Cuomo is also under investigation that he covered up data related to nursing-home coronavirus deaths. His right-hand aide, Secretary to the Governor Melissa DeRosa, admitted in a conference call with top lawmakers the administration undercounted the nursing-home deaths, fearing political fallout.

On Thursday, 60 members of the state legislature asked the governor to resign, prompting Heastie to launch his impeachment inquiry. Senate President Andrea Stewart-Cousins, D-Yonkers, had already called for a resignation.

While the furor has clearly distracted the budget-making process, Cuomo’s $193 billion fiscal 2022 budget proposal faces an April 1 deadline, the earliest among the states.

The state received a windfall from passage of the $1.9 trillion American Rescue Plan, which President Biden signed on Thursday. The $350 billion of overall direct aid to state and local governments will include nearly $24 billion for New York State and its municipalities, including $12.6 billion in unrestricted cash for the state alone and $10.8 billion to counties and municipalities.

Cuomo said the package represents “the ultimate one-shot … a sugar high.” The governor had requested $15 billion in his budget message two months ago.

“With the supplemental federal package, I don’t think it’s necessary to raise taxes,” Cure said, although Cuomo has kept the tax-hike option on the table.

E.J. McMahon, senior fellow and founder of Albany-based think tank Empire Center, said the state is flush with cash due to several installments of federal aid, Medicaid reimbursement measures and improved tax receipts, but given their one-shot nature, outyear gaps loom. The state, he said, has come into $10.7 billion of new funding.

“Remember, a lot of it is temporary federal money,” he said. “We have a situation where everyone’s rich right now, but with a puff of smoke the money could be gone.”

Federal aid, he said, totals “well beyond any reasonable assessment of real public sector budgetary needs created by the pandemic.”

The legislature has already rolled back some of the emergency powers it granted Cuomo last March, but the extraordinary budget powers enacted with the fiscal 2021 budget remain in place.

“The legislature now has a supermajority in both houses so it will be interesting to see if they press their advantage,” Cure said.

On Thursday, 17 budget watchdog groups including the Citizens Budget Commission, Reinvent Albany and the Regional Plan Association urged the governor and the legislature to make budget cuts transparent and not enact extraordinary executive budget powers for fiscal 2022.

“Compared to last year, the state’s economic conditions and tax revenues are more favorable and clear,” the watchdog groups said, citing the new federal aid. “The state has not provided complete details on withholdings and payment adjustments, having only disclosed details of about 25% of funds withheld during fiscal year 2021 in formal notices to the legislature.”

“Done right, the state and city can take care of New Yorkers’ vital needs and stabilize government finances, and critically, do this without raising taxes,” Rem said. “Absent improvements in government efficiency, effectiveness and quality over the long run, the state and city will just be kicking their fiscal reckoning down the road.”

According to state Comptroller Thomas DiNapoli, the state expects to sell $181.1 million for new-money transportation, education and environmental purposes, and depending on market conditions, $454.8 million to refund a portion of certain outstanding general obligation bonds to reduce debt-service costs.

In addition, the Dormitory Authority of the State of New York, one of the largest municipal issuers, plans to issue $2.1 billion of state personal income tax general purpose revenue bonds. Morgan Stanley is lead manager for the sale, which involves a nearly $2 billion taxable component.

Beyond the matters at hand, critics have been lashing out at Cuomo over the vaccine distribution process, alleged threats to lawmakers and reports of hiding structural deficiencies on the Gov. Mario M. Cuomo/Tappan Zee Bridge, which bears the name of Andrew Cuomo’s father.

Municipalities see the chaos as a window to emerge from what they consider heavy-handed, top-down governance from Albany.

“If it takes multiple scandals to get him to finally hear the voices of people at the grassroots and to respect local leaders, well that’s a sad commentary,” de Blasio said. “What’s important is we’re finally getting some of the changes we need, but what we truly need is local control.

“I think the way the governor has comported himself for years created a lot of fear and a lot of people felt they could not speak up and now they feel they can speak up, and I think you’re going to see more.”

Removal from office would require a majority vote in the Assembly and two-thirds in the Senate. The last impeached governor was William Sulzer, convicted in 1913 of perjury and misuse of campaign funds.