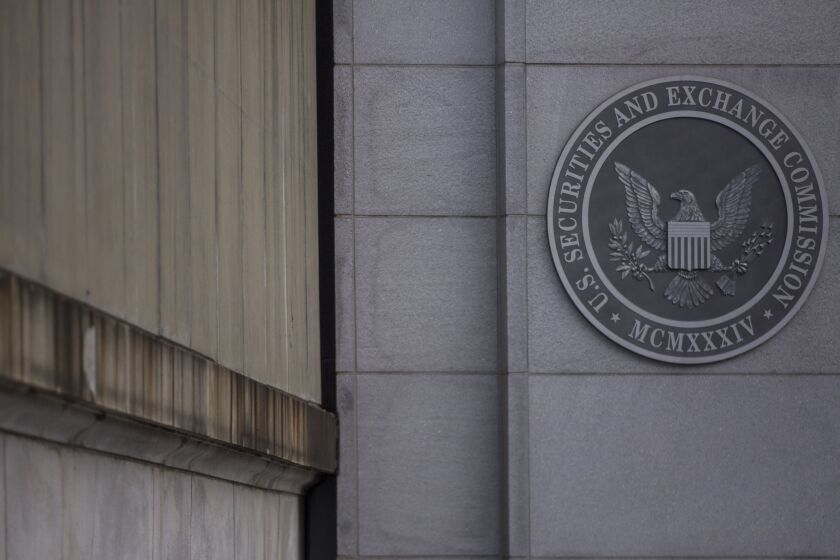 The Securities and Exchange Commission is set to bar from the industry a couple fined over $2 million for acting as unregistered brokers as a final step in the commission’s landmark case cracking down on “flipping” behavior.

Late last week, the SEC announced it was taking its final move to bar Michael Murphy, whom a federal court ordered to pay $419,040 in civil penalties. Earlier this month, the SEC made that same announcement for his wife, Jocelyn. Both were accused of operating as unregistered brokers as part of a massive flipping scheme the SEC charged in 2018. Jocelyn Murphy also committed fraud by giving false ZIP codes to get priority allocations of new-issue bonds, the SEC said. She was fined $1.7 million.

This follows a final judgment against the pair on Feb. 12, permanently banning them from future violations of securities laws and setting those fines. On Aug. 17, 2020, the SEC won its lawsuit against the Murphys in the U.S. District Court for the Southern District of California. Richard Gounard, another municipal bond flipper, was also included in that judgment.

The Murphys were alleged to have participated in thousands of transactions on behalf of RMR Asset Management, which was shut down in 2018. The SEC alleged that they engaged in flipping, i.e. improperly obtaining bonds meant for retail customers in order to sell them at prearranged prices to broker-dealers who then immediately resold the bonds to other broker-dealers at a profit.

The SEC action was part of a major 2018 enforcement sweep when the SEC brought actions against two firms and 18 individuals alleged to have participated in a scheme to improperly obtain new-issue bonds from at least 2009 to 2016.

The priority of orders is set by the issuer and can vary from issuer to issuer. It establishes the sequence in which bonds will be allocated. That priority is important since orders for bonds in a primary offering can often exceed the number of bonds available. Orders from retail investors have the highest priority.

In August, a federal judge ruled that Jocelyn Murphy knew she provided the brokers with false ZIP codes so that her order could be considered in the local retail allocation in jurisdictions she didn’t live in.

In July 2020, UBS Financial Services Inc. paid more than $10 million to resolve charges that from August 2012 to June 2016, it allocated bonds to flippers on hundreds of retail orders from Core Performance Management LLC and RMR.

UBS registered representatives William Costas and John Marvin also settled charges that month. The SEC said they negligently submitted retail orders for muni bonds on behalf of their flipper customers. The SEC also said another UBS representative, Chris Rosenthal, allegedly submitted ineligible retail orders when he knew or was reckless in not knowing, that those orders did not qualify for retail priority.

Regarding UBS, the SEC’s Chief of the Division of Enforcement’s Public Finance Abuse Unit LeeAnn Gaunt said the SEC would continue to pursue violations that undermine retail investors’ access to municipal bonds during the retail order period.

In September 2020, Roosevelt & Cross, Inc., settled with the SEC after the regulator alleged that the firm placed bonds on behalf of CPM, also known as Dockside Asset Management, and RMR. That settlement also echoed the sentiment of knowing that something was false.

“In some cases, the Roosevelt registered representatives submitted Roosevelt’s orders to Dockside or RMR during retail order periods when they should have known that those orders may be submitted to the lead underwriter as retail orders,” the SEC said in September.

The Murphys could still appeal the ruling to the United States Court of Appeals for the Ninth Circuit. Their lawyer did not respond to a request for comment.