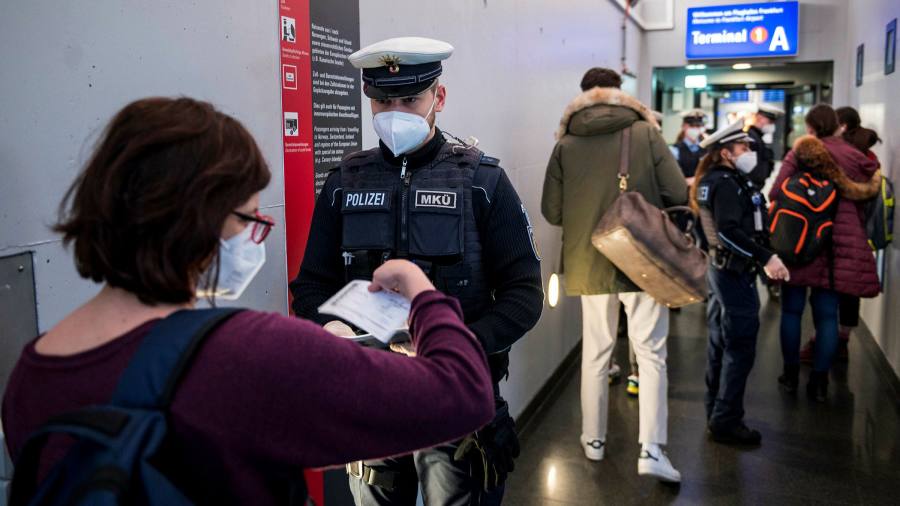 Brussels is to propose the creation of a Covid-19 certificate to allow EU citizens to travel inside the bloc after a push by tourism-reliant countries devastated by the pandemic.

The European Commission will on Wednesday call for a “digital green certificate” to be created that would allow vaccinated and non-vaccinated citizens to travel to other member states and not be forced to quarantine on arrival.

The certificate would be granted to citizens who had either proof of vaccination, a negative Covid-19 test, or proof of recovery from the virus for those who had contracted it previously, according to a leaked draft seen by the Financial Times.

EU countries have been at loggerheads over plans for an EU vaccine “passport”, with countries led by France arguing that such measures would discriminate against citizens who are last in line for jabs. Tourism-reliant member states such as Greece have led the push for a common framework to facilitate travel ahead of the lucrative summer season.

Brussels officials have stressed the certificate would not be a “passport” but a common system to help governments co-ordinate travel measures as vaccination programmes are rolled out across the bloc.

Governments have also been divided over which vaccines should be eligible after countries such as Hungary have allowed the use of Russian and Chinese jabs before they have been formally approved by EU regulators.

The commission’s draft text says all vaccines approved by the European Medicines Agency should be automatically recognised by other member states under the certificate. But governments would also have the power to recognise jabs such as Russia’s Sputnik vaccine as valid if they so wished.

It means countries that rely on tourism would not be prohibited from allowing in EU travellers who had received as yet unauthorised vaccines. But at the same time an EU official said: “No member states will be forced to recognise non-authorised vaccines.”

EU governments would also be able to strike bilateral travel agreements with non-EU countries as long as they were approved by the commission beforehand, said the document.

The tourism industry has been lobbying European governments to introduce common standards for travel amid concerns that the current system of country-by-country rules is confusing and putting people off booking.

Airlines have been running their own trials of digital passes to try to nudge regulators into widespread adoption of electronic certificates which would show that a passenger had tested negative for Covid-19, or been vaccinated, before they boarded an aircraft.

The global airline industry body, Iata, is one of several groups to have launched its own travel pass app. Its boss Alexandre de Juniac told the FT he was worried European governments would struggle to co-ordinate reopening their borders in time for the summer season.

“In Europe some — let’s say, to be polite — weaknesses in the EU approach of the vaccination strategy have not strengthened the confidence of states,” he said.

The EU’s proposal is subject to agreement from a majority of member states and the European Parliament.