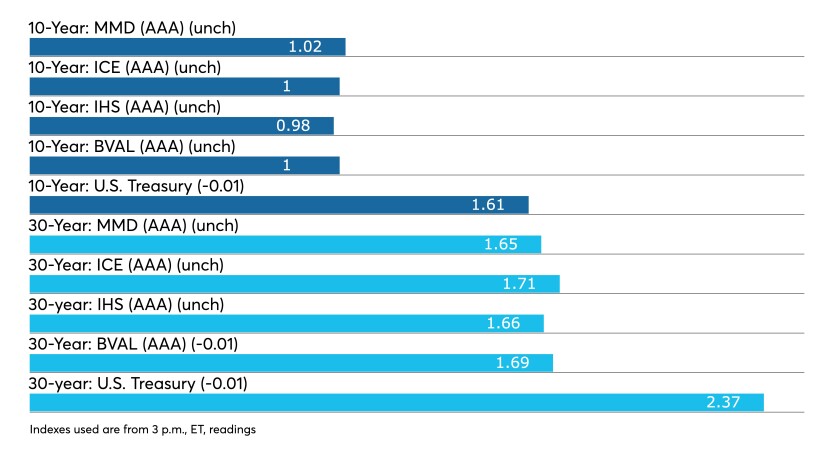 The municipal market was steady to firmer in spots on light activity Monday, with U.S. Treasuries calmer after Friday’s sell-off and muni market participants awaiting the larger new-issue calendar

Triple-A benchmarks were mostly unchanged across the yield curve and municipal to UST ratios within a tight range of Friday’s, with Monday’s 10-year at 64% and the 30-year at 70%, according to Refinitiv MMD. ICE Data Services showed ratios at 63% in 10-years and 73% in 30.

A reversal of fund flows and the planned arrival of the economic stimulus for states and local governments helped boosted the market’s morale ahead of more than $10 billion in new supply this week.

“We have a lot of good news in the market right now and the secondary market is firm,”a New York trader said Monday. “It’s a heavy week and the demand component is pretty good. We have had certain states snap back in the widening of spreads,” on the approval of the $1.9 trillion economic stimulus plan.

“From a credit perspective that alleviates some of the concerns for the muni sector,” he said. “We saw return to inflows last week where we saw the previous week’s outflows correct itself. There’s definitely money coming back into the market.”

Municipal valuations, though, should remain “horrendous” as long as municipal supply continues to be relatively muted, according to Peter Block, managing director of credit strategy at Ramirez & Co.

Tax-exempt supply this week represents about $8 billion, or 78.8% of the gross supply of $10 billion led by a $2.2 billion Dormitory Authority of the State of New York personal income tax revenue offering, Block noted in a weekly municipal report. He predicted that March new-issue volume should be $33 billion, down 2% month over month, with net negative supply of $1 billion.

While the Dormitory Authority of the State of New York’s $2.2 billion of exempt and taxable personal income tax bonds will test the market this week, another New York issuer announced plans for a $1.2 billion deal for next.

The New York City Transitional Finance Authority said late Friday that it will issue about $1.2 billion of future tax secured subordinate bonds next week. The deals are made up of around $1 billion of tax-exempt fixed-rate bonds and about $234 million of taxable fixed-rate bonds. Proceeds from the sale will be used to refund certain outstanding bonds for savings.

The tax-exempt fixed-rates are scheduled to be priced on Wednesday, March 24, after a two-day retail order period by book-running lead manager Ramirez & Co. with BofA Securities and Citigroup serving as co-senior managers.

The TFA also intends to competitively sell about $234 million of taxable fixed-rate on Wednesday, March 24.

Reports of possible higher taxes proposed by the Biden administration is fueling the municipal demand.

“Any time we get that kind of news, munis tend to do better, so all these things are looking in our favor,” the New York trader said.

No inflation worries, yet
The economic data calendar was light, with just one regional manufacturing sector survey, and despite its suggestion that price pressures are rising, analysts are not yet worried about inflation, but if numbers keep climbing through the summer, their opinions may change.

New York manufacturing sector activity “grew at a solid clip,” as the Empire State Manufacturing Survey’s general business conditions index climbed to 17.4 in March from 12.1 last month, according to the Federal Reserve Bank of New York.

Economists polled by IFR Markets expected a gain to 14.5.

“The Fed changed their inflation framework to average inflation targeting so as to not overreact to short-term inflationary pressures such as these,” he said. “In our view, this reading does little to change the Fed’s view on policy, but if it persists into the summer, they may be well behind the curve.”

The report, like other regional surveys, suggests “a significant rebound in manufacturing activity,” noted Scott Ruesterholz, portfolio manager at Insight Investment. The shipments and backlogs indexes, he said, suggest manufacturers’ “robust plans to add employees and invest in cap-ex.”

“The prices received index has also been increasing, though just to levels seen in 2018. This suggests that while prices are going up, manufacturers are absorbing some of the commodity price increase in the form of tighter profit margins,” he said. “We do expect to see inflation rise over the next quarter as commodity prices feed through, favorable base effects take hold, and strong consumer demand for travel and goods allows producers to raise prices.”

While short-term inflation should be “stronger” after reopening is complete, especially compared to last year’s depressed numbers, LendingTree chief economist Tendayi Kapfidze said, “In the near-term, there will be upward pressure on rates. Some rate sensitive sectors, like housing for example, might come under pressure.”

“Overall, the economy should power through the short-term headline inflation pressures and I think we will start to see the economy accelerate and by the summer,” he said, “it is going to be humming.”

Ruesterholz said these pressures will prove to be transitory, as the Federal Reserve has suggested, in which case it will disregard near-term inflation spikes.

“In order for inflation to move sustainably above target, shelter prices will likely need to rebound, as it accounts for over 30% of CPI,” he said. “While there are tentative signs that urban rents are bottoming, the rebound may be prolonged, which can keep inflation capped after its initial bounce in coming months.”

Illinois is set to price $1.25 billion of general obligation notes structures in three series, $850 million in 2021A, $150 million Series B, and $259.9 million in refunding Series C. Morgan Stanley will price the bonds, which are rated Baa3 by Moody’s Investors Service.

An $805 million offering of Missouri Health and Educational Facilities Authority health facilities revenue bonds on behalf of BJC Health System will be priced by RBC Capital Markets on Thursday consisting of three series of bonds which are rated Aa2 by Moody’s and AA by Standard & Poor’s.

On Tuesday, the California Housing Finance Agency is slated to sell $522.6 million of Series 2021-1 Class X certificates, which are variable-rate, partially tax-exempt, and not subject to the alternative minimum tax.

The bonds, which are structured to mature as a bullet maturity in 2035, are rated BBB-plus by Standard & Poor’s and are slated to be priced by Citigroup Global Markets Inc.

Elsewhere in the region, the state of Oregon will issue $453.5 million of general obligation bonds in three tax-exempt series priced by Morgan Stanley & Co.

Oregon will also sell $173.54 million of federally taxable GOs on Tuesday in a Morgan Stanley-priced offering.

The city of Huntington Beach, California, meanwhile, will sell $363.62 million of taxable pension obligation bonds in Series 2021. The deal, which will be priced by Stifel, Nicolaus & Co., is rated AA-plus by Standard & Poor’s and Fitch.

Back in the Northeast, the University of Massachusetts Building Authority will sell $317.32 million of refunding revenue bonds in Senior Series 2021-1 on Wednesday. The bonds will be priced by Citigroup with a serial structure maturing from 2021 to 2037 and rated Aa2 by Moody’s, AA-minus by S&P and AA by Fitch.

The New York Transportation Development Corp. will sell $269.33 million of exempt facility revenue bonds in Series 2021, which is tax-exempt and subject to the alternative minimum tax.

The Louisville/Jefferson County, Kentucky, Metropolitan Government is on tap to sell $198 million of pollution control revenue bonds in 2003 Series A and 2001 Series B bonds, both for the Louisville Gas & Electric Company Project. The bonds are rated A1 by Moody’s and A by Standard & Poor’s.

Trimble County, Kentucky, meanwhile, will sell pollution control revenue bonds in 2001 Series B for the Louisville Gas and Electric Company Project in a remarketing of $128 million of Series 1 and $35 million in Series 2 and 3. Morgan Stanley is the book-runner.

A $193.2 million refunding from Wake County, North Carolina, is on tap for pricing on Wednesday in a negotiated sale underwritten by Wells Fargo Securities.

The gilt-edged offering consists of GO public improvement bonds structured as serial bonds maturing from 2022 to 2038.

The Memphis-Shelby County, Tennessee, Airport Authority is expected to land $172.5 million of airport revenue bonds in a four-pronged deal, the largest of which is Series 2021A, subject to the alternative minimum tax and structured as serials maturing from 2025 to 2026 and 2030 to 2040, and terms in 2045 and 2049.

The bonds, which are rated A2 by Moody’s, A by Fitch, and A-plus by Kroll Bond Ratings, is being priced by Raymond James & Associates.

The Riverside County Office of Education will sell $171.7 million of pooled cross fiscal year 2020-2021 tax and revenue anticipation notes in Series A and B on Tuesday with UBS Securities as the bookrunner.

BofA Securities is the underwriter.

The bonds, which are rated A3 by Moody’s, A by S&P and A-minus by Fitch, are being priced by BofA Securities.

The Orlando Utilities Commission, meanwhile, is bringing $154.8 million of utility system revenue bonds to market on Wednesday in a deal priced by Wells Fargo Securities.

Both series are rated Aa2 by Moody’s and AA by S&P and Fitch.

Lynne Funk contributed to this report.