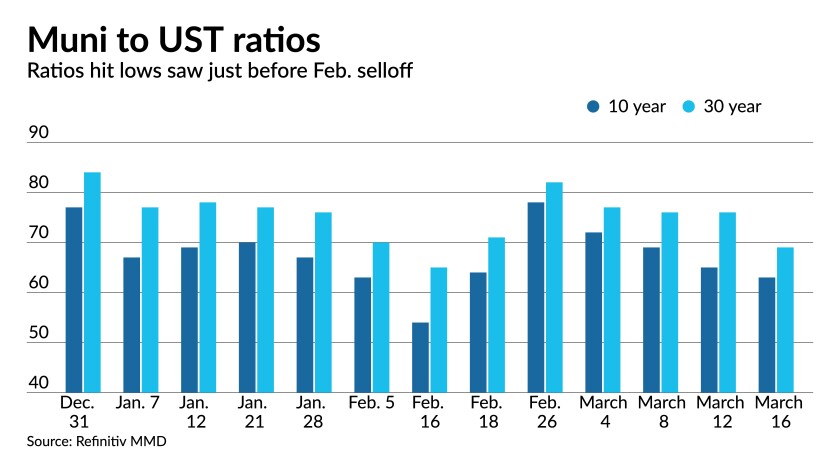 Triple-A benchmarks were little changed in mixed trading as the primary did the talking. U.S. Treasuries rose ahead of the Federal Reserve’s FOMC meeting conclusion Wednesday while equities lost ground.

Municipal yields were relatively unchanged in the face of rising Treasury yields, which is keeping the municipal to Treasury ratios at extremely rich levels, noted Roberto Roffo, managing director and portfolio manager at SWBC Investment Company.

“There is still a significant amount of cash on the sidelines from the positive year-to-date inflows, which should support not only new large issues, but also the market in general,” Roffo said Tuesday.

Investors sitting on the sidelines in the secondary since Friday got a sense of what the primary had to offer and new deals were easily digested and underwriters bumped levels with the state of New York selling exempts through triple-A levels. While a repricing was not yet available as of publication, many traders and analysts expect the Illinois deal to bump levels further.

The week’s largest deal is expected from the Dormitory Authority of the State of New York (/AA+/AA+/), which is set to price $2.2 billion of tax-exempt and taxable personal income tax bonds with Morgan Stanley & Co. running the books on Thursday. DASNY is also set to price $210.2 million federally taxable PITs.

“The $2 billion DASNY deal should do well as New York will be the recipient of a significant windfall from the last COVID relief package, strengthening its financial stability,” Roffo said.

As analysts digest the stimulus law — and most agree it will be a boon for muni credits — some, such as Municipal Market Analytics, argue the American Rescue Plan Act is more likely to reduce rather than grow 2021 primary market issuance in 2021.

“This is a function of it backfilling state and local revenues, helping at least some governments avert the use of rescue financings and taxable restructurings: a positive for both credit quality and reinvestment challenges in 2022-2024.”

It may encourage more issuers to finance new-money projects, which would be additive to supply, “but this is easily exaggerated,” according to MMA.

“CUSIP request volumes have swung widely in the span of one month, signaling that the volatility we saw in 2020 may be with us for some time,” said Gerard Faulkner, director of operations for CUSIP Global Services. “With continued uncertainty in the economy and interest rates possibly mounting a slow-but-steady increase, we can expect to see continued swings in the CUSIP Issuance Trends indicator throughout the first part of the year.”

CUSIP identifier requests for the broad category of U.S. and Canadian corporate equity and debt rose 43.0% in February from last month. The monthly increase was driven largely by U.S. corporate equity and debt identifier requests, which increased by 21.2% and 111.9%, respectively. On a year-over-year basis, corporate CUSIP requests were down 25.3%, reflecting a significant year-over-year decline in January of 2021.

How mixed economic indicators are moving the sentiments
A drop in retail sales can be discounted as a large upward revision to January’s numbers and the stimulus money about to reach consumers will lead to a big number in March, economists say.

Excluding autos it was down 2.7%, compared to a 8.3% increase last month. Economists predicted a drop-off of 0.1%.

“January’s numbers were revised up rather noticeably and [according to data from the Federal Reserve Bank of St. Louis], the dollar amount is still way above pre-pandemic levels,” said Kevin Flanagan, head of fixed income strategy at WisdomTree. “Texas winter weather and the fading of the $600 checks likely played a role … guess what’s coming? Better weather and $1,400 stimulus checks.”

He said February’s number doesn’t make him concerned about the economy, in general, or about inflation.

“I think this was just a one-month occurrence,” Flanagan said. “It is now a matter of when we will reach immunity and not if we have a different take on the virus now. I am not concerned about inflation right now, but I do think we hit 2% sooner than what the Fed is anticipating. If that does happen, what is their threshold for how long they will let it run above the target? Where and when does the Fed stand and step in from a policy perspective? Those are things I’ll be keeping an eye on.”

He also added noted the forecast for gross domestic product for the first quarter is around 8% to 8.5% growth.

“We believe the consumer will be the economic engine of this recovery as their balance sheets were relatively clean coming into the COVID-induced economic shutdowns last year,” said Komson Silapachai, vice president of research & portfolio strategy at Sage Advisory Services. “Three rounds of stimulus have resulted in a sky-high savings rate for the consumer, which we think will continue to be released in the form of higher spending as the economy reopens in the coming months. We think that retail sales will trend higher throughout the summer.”

Sameer Samana, senior global market strategist for Wells Fargo Investment Institute, believes the U.S. consumer continues to be the major force behind U.S. economic growth, and will play a major role in the recovery.

“While retail sales for February were a little weaker than expected, they follow a very strong January and the upcoming stimulus checks and unemployment benefits will also help the consumer to recover in March, as some were fearful that a fiscal cliff was approaching,” he said. “Overall, the trend in consumption is one of the underpinnings of our positive outlook on the U.S. economy and equity markets.”

Scott Ruesterholz, portfolio manager at Insight Investment, has a slightly different view, as he thinks that Tuesday’s retail sales report “painted a complicated picture” of the U.S. economy.

“As such, the dollar value of February retail sales was actually in-line with expectations. Most categories showed declines, led by department stores, e-commerce, and sporting goods,” he said. “Overall, the report painted a complicated picture on the U.S. economy.”

He said that January’s report was “greatly” aided by the $600 checks passed in late December, and with that “effect fading, spending normalized in February.”

“This highlights that the U.S. economy is still quite reliant on stimulus measures,” Ruesterholz said. “The fact that stimulus measures provided a one-time surge in spending growth, rather than ongoing increases, may ease worries of fiscal stimulus causing spiralling inflation. Instead, while inflation is poised to rise in coming months, this bump may similarly fade as fiscal stimulus fades, as we saw with consumption growth.”

Another impactful component of the report, according to Ruesterholz, is the slower-than-normal tax refund payments, which can boost February spending in the seasonal adjustments.

“Seasonal adjustments may increase the volatility of economic data over the next quarter due to reopening and the impact of last year’s lockdown,” he said. The potential for seasonally distorted data increases the risk of investors misjudging the pace of economic recovery. This type of uncertainty can cause periods of increased volatility, and higher levels of uncertainty and volatility may continue to characterize the investing landscape for fixed-income investors.”

Other indicators on Tuesday included, import and export prices. Import prices increased 1.3% in February after a 1.4% climb in January. Meanwhile, export prices rose 1.6% in the latest month after a 2.5% jump in the previous month.

Economists predicted imports to increase 1.2% and export prices to advance 1.0%.

Economists estimated production to be 0.4% higher, while they predicted capacity to come in at 75.6%.

Business inventories inched up 0.3% in February, as economists correctly predicted the gain. This compares to a 0.8% gain in January.