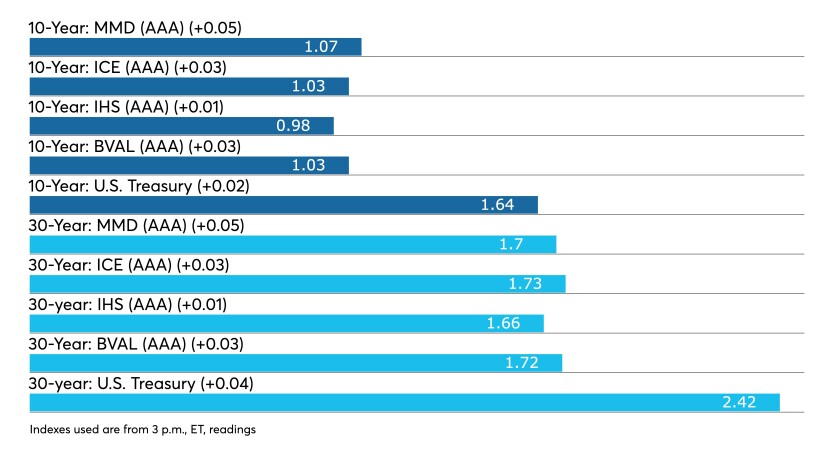 Munis were weaker by a few basis points across the yield curve Wednesday, as participants focused on the Federal Open Market Committee meeting and the Summary of Economic projections, which suggested higher inflation in 2021, but no rate increases before 2023.

The 10-year U.S. Treasury hit 1.67% but pared back overnight and earlier-in-the-day losses after the release and stocks rallied after the announcement.

“Bond investors may push back on this long-term dovish view from the Fed and begin to push longer-term rates higher,” said Jeff MacDonald, head of fixed-income strategies at Fiduciary Trust International. “Should this move be aggressive in nature, concerns about the recovery and expected progress toward the Fed’s policy objectives could face headwinds and introduce a policy response from the Fed.”

“Inflation may be on the rise, but it doesn’t mean interest rates are going to skyrocket,” he said. “The Fed could control rates through language and bond buying even if inflation expectations continue to rise. But if you’re losing sleep over rising rates, then shortening up your bond portfolio’s duration can mitigate mark-to-market risk and allow more cashflow to be reinvested at higher yields. “

“With Treasury yields continuing their ascent this week, munis have held steady, albeit with a muted to weaker tone just ahead of today’s meeting wrap-up,” according to Jeff Lipton, head of municipal credit and market strategy and municipal capital markets at Oppenheimer & Co. “Both the equity and bond markets revealed their anxiety over the prospects for inflation and higher interest rates in anticipation of what turned out to be one of the more relevant central bank gatherings of the year.”

ICI back in the black
The Investment Company Institute reported a return to inflows with $1.405 billion coming into long-term municipal bond mutual funds, after outflows the previous week, adding to the strong fundamentals in munis.

In addition, an outlook change by Moody’s Investors Service from negative to stable for states and local governments is giving the market a confidence boost.

“Given that the Biden administration is likely to now focus on higher individual and corporate tax rates, demand for muni tax-exemption, particularly from institutional buyers, can be expected to expand and such demand may very well lead to continued muni outperformance,” Lipton noted.

In the previous week, muni funds saw an outflow of $568 million while ETFs saw $306 million of inflows.

Taxable bond funds saw combined $3.526 billion of inflows in the latest reporting week after an inflow of $14.335 billion the prior week.

While FOMC members do expect higher inflation this year, they expect it to be transitory, and most don’t see a rate increase before 2023.

In the newly released summary of economic projections, or “dot plot,” seven participants see rates rising by 2023, compared with five in the prior projections, but 11 see rates still near zero at that juncture.

In its post-meeting statement, where it committed to continued asset purchases and announced its decision to hold rates at a range between zero and 0.25%, the panel said, “Following a moderation in the pace of the recovery, indicators of economic activity and employment have turned up recently, although the sectors most adversely affected by the pandemic remain weak.”

In his press conference, Federal Reserve Board Chair Jerome Powell said the stronger projections shouldn’t be a surprise. Liftoff, he said, will come only when inflation hits 2% on a sustained basis, and is “on track” to be moderately higher for a period, and maximum employment is reached, which is not just the unemployment rate.

The future remains “highly uncertain,” Powell said, and projections can change based on data.

“As expected, the Fed sharply upgraded its economic and inflation forecasts, but doubled-down on the idea that this won’t necessarily lead to a preemptive tightening of monetary policy,” said Tom Garretson, senior portfolio strategist at RBC Wealth Management. He pointed to the “transitory” core inflation spike in this year, before it steadies next year, which he said, “is consistent with the Fed’s average inflation target.”

“The Fed is desperately trying to generate some inflation,” said Bob Phillips, managing principal and co-founder at Spectrum Management Group. “We believe to achieve that over the next nine months inflation will have to average close to 2.65%. That may happen in the short term with all the cash being injected into the economy via the COVID relief bill. Longer term we believe it will still be a challenge given the debt overhang.”

Zhiwei Ren, managing director and portfolio manager, at Penn Mutual Asset Management, said, “The Fed’s tone is very dovish: a much stronger recovery, but still no rate hike. As a result, the yield curve steepened sharply and risk assets rallied.”

“The Fed does not seem worried at all about the rise in inflation expectations signaled by the bond market,” said Brian Coulton, chief economist at Fitch Ratings. “Despite the reference to the recent upturn in activity data, a 2.3pp increase in their 2021 GDP growth forecast and a 2023 unemployment forecast of 3.5%, there is no hint at any change in policy trajectory. A clear majority of the dots (11 out of 18) still see no rate hike even by end 2023. When the facts change this much and policy guidance doesn’t move at all it’s pretty clear the Fed’s reaction function has shifted.”

The statement shows a still dovish policy stance, said Steven Oh, global head of credit and fixed income at PineBridge Investments. “There is no indication that the Fed is shifting its stance toward a more hawkish bias and its statement is largely unchanged in its direction and guidance.”

Despite the upgrade in expectations in inflation levels, he said, “the forecasts for ’22 and ’23 remain below levels necessary to increase rates through 2023 under its average inflation target approach.”

In economic data released Wednesday, housing starts dropped 10.3% in February to a seasonally adjusted 1.421 million pace from January’s upwardly revised 1.584 million level, while building permits plunged 10.8% to 1.682 million in the month, compared to an unrevised 1.886 million starts in January.

Housing starts fall
Housing starts were down 10.3% in February to 1.421 million, well below January’s revised pace of 1.584 million, while building permits dropped 10.8% to 1.682 million in the month, compared to a revised 1.886 million starts in January.