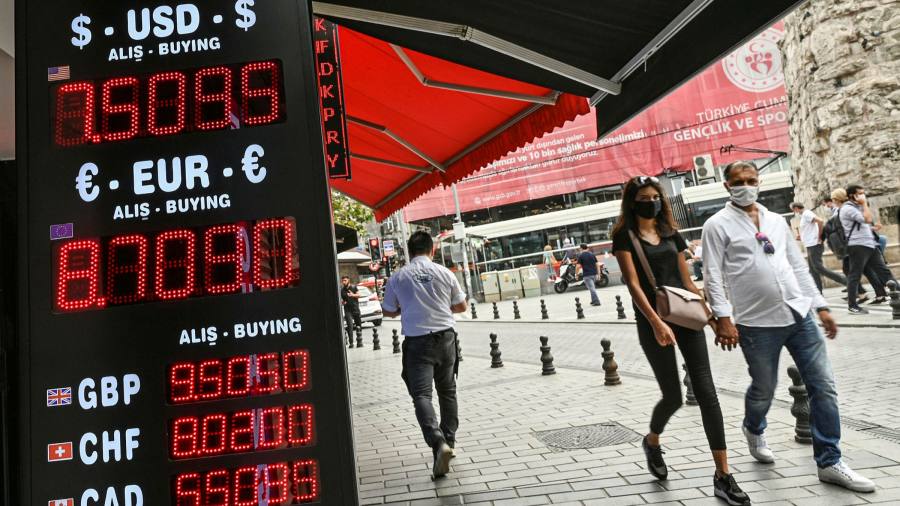 Turkey’s president has fired the governor of the central bank just three months into his term and replaced him with an academic who has lobbied for lower interest rates in a shock move that is likely to heap more pressure on the lira.

Recep Tayyip Erdogan’s dismissal on Saturday of Naci Agbal, came just two days after the respected former finance minister had won plaudits from the market by hiking interest rates by 200 basis points to tame inflation and support the currency.

“This is a truly idiotic decision by Erdogan and markets will express their opinions on Monday, and it is likely to be an ugly reaction,” said Timothy Ash, an analyst at BlueBay Asset Management.

Since his appointment in November, Agbal had increased the benchmark interest rate by a cumulative 875bp to 19 per cent, helping the lira recover as investors saw signs that Turkey was moving towards more orthodox monetary policy.

But that ran counter to Erdogan’s view that higher interest rates cause, rather than cure, inflation. He demanded that credit stay cheap to boost economic growth, fuelling double-digit inflation for much of the past three years and prompting foreign investors to dump Turkish assets.

In a tweet, Agbal said: “I express my gratitude for my dismissal from duty as of today. May God grant us all good luck.”

Erdogan has replaced Agbal with Sahap Kavcioglu, a little-known professor of banking and a former lawmaker from the ruling Justice and Development party. Kavcioglu wrote in his column at the Islamist newspaper Yeni Safak last month that “interest rate increases will indirectly lead to an increase in inflation”.

The shake-up is likely to erode hopes among investors that the bank would assert its independence from Erdogan. The currency had strengthened by about 18 per cent since Agbal took the helm and pledged to restore the central bank’s credibility.

The country’s $730bn economy has been struggling to emerge from the tumult caused by a currency shock in 2018 when Erdogan’s economic and foreign polices frightened away investors.

“Erdogan’s move leaves little doubt that all of the power in Turkey rests with him, and this will result in rate cuts. This will simply make Turkey’s inflation problem even worse,” Tuvey wrote in a research note. He warned that a gaping current account deficit and enormous foreign-debt liabilities posed risks for the Turkish financial system.

Investors had hoped Turkey was on the path to stability after Berat Albayrak, Erdogan’s son-in-law, resigned as finance minister in November amid mounting criticism of Ankara’s economic management and the plunging lira, including the central bank’s depletion of its foreign-currency reserves to mitigate the lira’s losses — a policy that Kavcioglu has supported.

Kavcioglu becomes the fourth Turkish central bank governor since 2019 as Erdogan fired both of Agbal’s predecessors before their four-year terms expired.