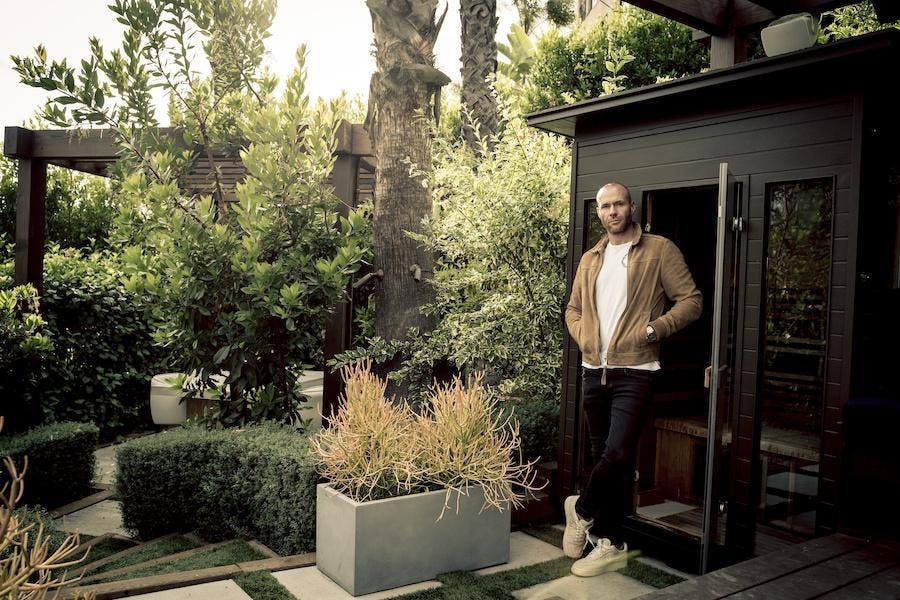 If the name Oliver Trevena sounds familiar, it’s because he’s developed quite the name for himself as an actor and entrepreneur. In the public eye since the age of four, he was born and raised in East Sussex, England. Trevena became a child star performing in plays such as A Midsummer Night’s Dream, The Nutcracker, and Oliver. Since then, he has starred in movies including Coffee Shop, The Rising Hawk with Robert Patrick, and Embattled with Nicolas Cage.

While Oliver has no plans to step away from the camera any time soon, he has also been hyper-focused on his various business ventures including Caliwater (a functional cactus water beverage brand he co-founded with actress Vanessa Hudgens) as well his investments in Vita Bowl, Mobot, Dogpound, Change of Heart, Next Health, Clmbr, Lasso, Artha, and Vital Red Light, which he also co-founded. Like most people, he’s been working from home throughout the pandemic, even utilizing his home as a backdrop for brand photoshoots and content creation.

Trevena lives in a truly elevated Hollywood Hills bachelor pad. The architecture, decor, and landscaping of this home allow him to truly embrace a California lifestyle of indoor/outdoor living.

With southern exposure, this home features jaw-dropping views of Hollywood. On a clear day, it is even possible to see the ocean. Like many homes in the Hollywood Hills, the property doesn’t have an abundance of usable land. So there are three separate outdoor areas, one of which was created by physically excavating a steep hill. While this was challenging, there is no doubt that it was worth it for Trevena.

The outdoor area behind the house and up a verdant path features a biohacking spa with several amenities including an Enlighten red light sauna which has a sleek wood exterior. This is one of Trevena’s favorite things about the home. “I use it probably five times a week for an hour and take cold showers every fifteen minutes during the sessions with the outdoor shower. I normally listen to an audiobook while in the sauna through the internal sound system,” he tells me. Infrared light has many benefits including detoxification, muscle recovery, and improving the skin.

Adjacent to the sauna is a Bullfrog hot tub, which Trevena says uses approximately twelve percent of the power a regular hot tub does. This brand is considered the Tesla of hot tubs. Trevena felt it was important to create an eco-friendly space among the gifts the natural elements provide on this property.

Trevena’s outdoor shower was built with bamboo lumber, which was engineered to have incredibly cold water, much like a cold plunge pool.

In addition to these amenities, there’s an outdoor projector and orbit-shaped wood swings from Giovani.

Adjacent to this space is an outdoor dining room complete with a wood pergola and a bold chandelier. It has an intimate vibe that’s only enhanced by the million-dollar views.

A grass and wood stair path leads to an additional outdoor patio area off the back of the house with a built-in barbecue and refrigerator.

There is also outdoor space in front of the house, which features sweeping views of this iconic neighborhood. This low-key informal setting is ideal for morning coffees, work, and relaxation while taking in the views.

While the interior of the house is just under 1200 square feet, its style packs a major punch. There are two bedrooms and two bathrooms.

The second bathroom is accessible through the guest bedroom as well as through a secret bookcase door. “I stole the idea,” Trevena tells me. “My friend Lucas Keller, the owner of Milk and Honey, the music management company and investment company—I went up to his house and I [asked] where’s the bathroom? And he [said] there and I was worried [about] the bookshelf and I pushed it. I thought, oh my god, I’m totally stealing the idea.”

The living room is also a reflection of Trevena’s personality. The white mantle, black leather sofas, and white chairs give the home a cool, masculine vibe. The white brick mantle is decorated with a unique fire hydrant art piece from artist David Mir.

The ottoman/coffee table is perfectly curated with a selection of books and accented with a Hermes-inspired fried egg art piece also created by Mir.

There’s plenty of space for the Vital Red Light device which he uses every morning and evening. Trevena tells me, “Red light therapy helps with a variety of wellness benefits for the mind and body, from calming at the end of the day and transitioning the mind and eyes off of blue light emitted by electronics, to naturally energizing in the morning.”

The large open kitchen takes up approximately one-quarter of the living area.

This home is located in an area referred to as The Hollywood Dell, filled with historic Hollywood homes once owned by actors like John Abbott, Ava Gardner, and Bette Davis, to Josh Lucas and Rudolph Valentino. It’s the second time Trevena has lived on this block.

“Fourteen years ago, I rented a room from a dear friend of mine who lived about seven houses down. He passed away in a freak motorcycle accident years ago when we were living there. Afterward, we all moved out and went our own way. I hadn’t been back since. My real estate agent that was looking at houses sent me to the street and straightaway. So it’s like good vibes, and was almost a sign. This sounds really cheesy, but I came down to see the house and there’s a street lamp at the corner of the road where his house was. So I often will stop and have a little moment there, and know I’m in the right place.”