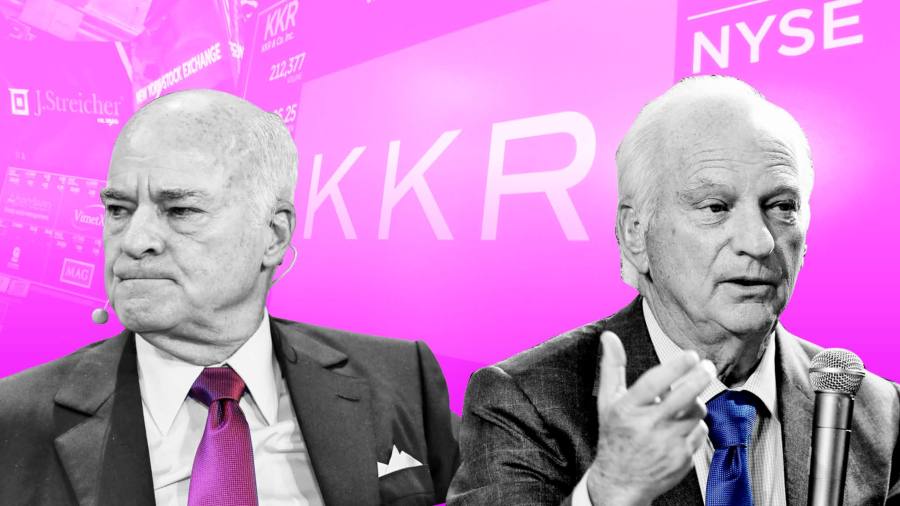 Henry Kravis and George Roberts, who made their first billions by striking deals that pulverised other people’s corporate empires, stepped down from KKR on Monday after nearly half a century in charge of one of the most formidable financial enterprises that Wall Street has ever known.

Companies owned by KKR today employ far more people, in more countries, engaged in more disparate work, even than RJR Nabisco, which KKR bought for $25bn in 1989 on the theory that a sprawling conglomerate that made everything from Camel cigarettes to Ritz crackers would be worth more if it were broken up.

Inconceivable at the time of that deal — memorialised in Barbarians at the Gate — KKR has grown such that its portfolio companies today employ over 800,000 people, from computer programmers at Epic Games to hospital administrators at Envision Healthcare and machinists at industrial businesses scattered throughout the midwest.

Incoming chiefs Scott Nuttall and Joe Bae are not only taking charge of one of the biggest buyout funds on Wall Street, but assuming control of an all-purpose financial institution with a big presence in infrastructure and real estate, which lends billions of dollars to other private equity firms’ deals, and is expanding into insurance.

“It’s a broader firm with multiple engines of growth,” said John Waldron, president of Goldman Sachs. “I don’t think I’ve ever seen them in a stronger position.”

Nuttall and Bae, who started at KKR in their 20s, must now convince investors that the firm can prosper in its new incarnation, as a firm less interested in striking home runs than steadily growing its asset base and pushing into new markets.

So pervasive is KKR’s presence in the financial industry that even its rivals have a stake in its success. “George and Henry have been great role models and mentors for everyone in the industry,” said Egon Durban, the co-CEO of Silver Lake. “Joe and Scott have what it takes to be able to drive KKR to extraordinary new heights in the years ahead.”

The core of KKR remains the private equity business that has acquired at least 400 companies worth more than $650bn since Kravis and Roberts, cousins who studied together in the 1960s at Claremont Men’s College, left investment banking to set up a new kind of financial institution in 1976.

Their hardball approach to corporate ownership “is one of the reasons that the US corporate sector has become so successful and profitable over the last 40 years”, said Steven Kaplan, an expert on private equity who teaches at the University of Chicago Booth School of Business.

Overseen by demanding KKR executives, chief executives who had once run their companies as personal fiefdoms now found themselves on a short leash. Another kind of discipline was imposed by billions of dollars of financial debt laden on corporate balance sheets. KKR even inserted itself into the operational details of the businesses it owned, creating Capstone, an in-house consulting group to uncover efficiencies in everything from supply chains to environmental footprints.

KKR’s approach not only created a $4tn investment industry that transformed how thousands of companies were run, but even affected the way stock market-listed companies do business. “Public companies were forced to respond to the pressure from leveraged buyouts and private equity by improving their corporate governance,” Kaplan said.

For all its influence, KKR’s buyout arm now accounts for a little more than half of its $429bn portfolio of assets, as the firm expanded dramatically over the past 20 years into a diversified alternative investment manager.

The incoming co-chief executives earned their spurs by creating some of the firm’s fastest growing businesses.

Bae, 49, was responsible for KKR’s expansion into Asia in 2005, now one of the fastest-growing areas of the firm with over $30bn in assets. In recent years, he has also overseen much of KKR’s global investment platform, including its private equity operations in the US and Asia-Pacific.

Nuttall, 48, has led many of KKR’s most important strategic initiatives, including its listing on the New York Stock Exchange in 2010 and the creation of its $24bn balance sheet, which now represents a significant piece of its market value.

He also built KKR’s capital markets business, its expansion into credit investing where it now has $170bn in assets, and led the July 2020 acquisition of annuity provider Global Atlantic Financial Group, which increased the firm’s insurance assets to an estimated $90bn

KKR’s outgoing leaders emphasised the role that their chosen successors have played in transforming their firm into a diversified financial institution. “Joe and Scott . . . have worked collaboratively and cemented a strong leadership team that has taken the firm to new heights,” said Kravis and Roberts in a statement.

But at the same time as grooming a new generation of leaders, the founders sought to reshape their firm to make it less dependent on the personalities at the top.

In July 2018, the firm completed its conversion from a partnership into a corporation. Two years later, it eliminated a special class of shares that allowed insiders to veto the wishes of outside shareholders.

Monday’s leadership transition will come with additional corporate changes that make KKR look like the corporations it targets. It will retire its dual-class share structure. After five years, all of KKR’s common stock will vote on a one-per-one basis, increasing shareholders’ influence on corporate matters like its board.

“I don’t think you need to find the next Henry Kravis or George Roberts,” said Gerald O’Hara, an analyst at Jefferies, who covers alternative asset managers like KKR. “The alternative firms are a lot more institutionalised than when they were more like rough and tumble buyout shops at their inception.”

“The ultimate goal is inclusion into the S&P 500,” added O’Hara. “The bottom line here is the continued evolution of the alternative asset managers into the public domain.”

The increased embrace of the public markets has propelled the buyout firm’s stock and made Kravis and Roberts, KKR’s two largest shareholders, richer than ever.

KKR has returned 62 per cent this year and tripled since the beginning of 2019. On Monday, after Kravis and Roberts announced their departure, the shares neared a new record high. However, the shares retreated over the rest of the day, closing 0.1 per cent lower at $65.43.