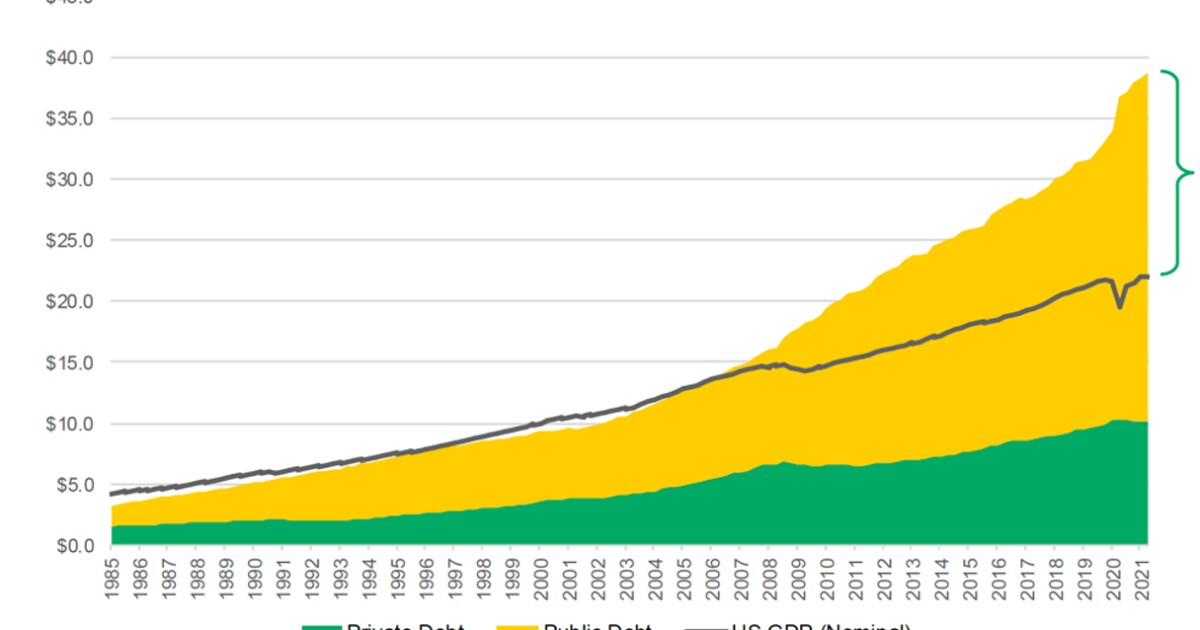 The global pandemic has created many new norms. Recently Zillow announced it will base employee pay on the value of the employee — not on where the employee resides. This is one example of a major shift in how we think about the employee/employer relationship.

Similarly, other norms are diverging in fixed-income. Take, for example, the fact that an unprecedented gap has opened between government spending and growth — two economic indicators that have long stayed on a similar trajectory, ensuring structural security for investors. This widening differential points to a steadily sinking level of productivity in that debt — something that has been happening for decades.

Let’s say your client is a conservative investor with much of their savings in bonds and cash. You want to discuss with them the persistent low interest rates and how this is draining value out of their savings. You say: “Let’s sit tight, because I believe interest rates will come back up eventually. They always do.” Unfortunately, I’m afraid this may turn out to be wrong. Let me explain why.

There’s been an unusual, historic, and persistent divergence between growth and spending.

GDP growth and the growth of combined public and private debt have historically tracked closely together. However, around 2006 something unusual happened: debt, and particularly public debt, began rising precipitously while GDP ticked along with minor growth (including a significant dive during the global financial crisis). From the 2010s until now, public spending galloped upward while GDP ticked up steadily — but not at the same rate as credit creation. We’ve never seen this degree of divergence before during peacetime.

Now, looking at our current situation, Congress is working on passing a multi-trillion-dollar budget that aims to include a huge infrastructure package. While this does exemplify the runaway spending we’ve seen on both sides of the aisle in recent years, this specific bill would appear — upon first glance — to support a rational and necessary cause.

Beyond doubt, the U.S. infrastructure base is in dire need of maintenance and repair. In one specific example, a 2015 study concluded 20% of highways in the U.S. failed to meet the criteria for acceptable pavement.

But there’s a fundamental difference between the Federal Highway Act of 1956 and today’s infrastructure bill. The 1956 Act represented a “zero to one” that unlocked the massive economic potential of the automobile for the American economy in the second half of the 20th century, while the 2021 edition calls for $621 billion toward the repair and maintenance of the infrastructure our grandparents and great-grandparents built.

The marginal economic output of the latter investment is unlikely to meet the high bar set by the former. As goes with movie sequels, the follow-up is likely to disappoint.

What does this mean for retirement and fixed-income investors?

Conservative investors are thus faced with a scenario where low bond yields will persist as central banks work through the long-term credit cycle. Early results suggest purchasing power of their saved money will erode, as the CPI printed annual growth above 5% for four consecutive months from May through August of 2021. Despite rumors to the contrary, the Fed’s guidance suggests no consensus for interest rates hikes until 2023 — and as it has stated, it will allow the inflation to run above 2% for a sustained period to help stabilize the labor market and broader economy.

These persistent low interest rates and easy money policies have allowed people and governments to build credit to sustain growth; any deleveraging would be practically and politically painful. The unfortunate truth is that whether inflation is going to be transitory or long-lasting, your dollar is going to be worth less in the future than it is today, and investors will have fewer opportunities to earn “safe yield.”

This lines up with the conclusion that for the next few years, expect to be in a tough spot if you’re a conservative saver, investor, or retiree holding low-interest, low-growth assets such as bonds.

This is a historic and likely permanent transition.

The American economy was different when output growth and credit creation tracked closer together. The labor force was growing, riding a tailwind from both the baby boom generation as well as women for the first time broadly entering the workforce.

That trend has reversed to a headwind, as the U.S. population of working age adults peaked in May 2020, according to the OECD.

Coincidentally, the productivity of credit creation has declined, and the new era of quantitative easing following the global financial crisis changed the game dramatically: markets came to expect accommodative monetary policy even during a time of rising asset values and low unemployment.

If we now find the credit growth sparkplug refusing to kickstart the growth engine in the future, the U.S. economy may look entirely different than the past. As someone who advises retirees and conservative investors, I find this trend disturbing.

Some advice for investors and soon-to-be retirees.

We’ve recently spoken with a lot of investors, and here is a distillation of what we think they should hear:

These are scary points to make to someone who’s been saving their entire lives to live a comfortable retirement, but there is hope. There are innovative approaches you can take that act as a lifeboat out of this situation.
We’ve written about the need to improve on classic stocks-and-bonds portfolio construction in order to solve for longevity and other risks.

While the economic situation has become even more dire since then, an approach that embraces active fixed-income management, passive equity exposure and a new risk management model guided by a quantitative framework still makes sense to us in today’s zero interest rate policy world.

But to get in the lifeboat, retirees and conservative investors are going to have to leave their familiar “set it and forget it” investment ship. I hope for their sake that they can.